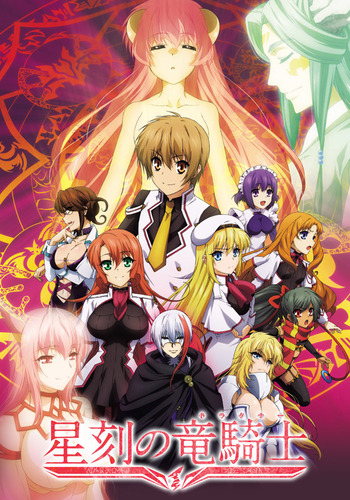 "Problem child" Ash Blake is nothing but a nuisance to his fellow students at Ansullivar Dragonar Academy. Sure, he's got the sacred star brand that marks him as a future master of dragons, but his lack of dragon companion and hot temper make it more than a little difficult for him to play the part of the hero. That is, until his dragon awakens, and he's finally partnered with a fierce, fire-breathing... cute girl? And her human form isn't the only surprise; she's determined to be Ash's master. But when dark forces begin to endanger the lives of dragons and students, Ash and his partner must find a way to work together to defeat them!

Dragonar Academy is awful.  Unless you are already the type to enjoy shows like these then maybe it's for you but if you are looking for something even remotely entertaining stay away from this garbage.  Produced by C-Station and directed by Shunsuke Tada I must say I didn't exactly have high expectations going onto this.  I'm generally not even a fan of harem shows to begin with but much of my morbid curosity stemed from the fact C-Station was once apart of Bee Train, a studio that many have come to hate over the years but I still reamin a die hard fan today for their vast and highly imagintive works.  By 2012 however it seemd Bee Train made a quiet retreat from the business with it's aged founder and director likely retiring and this sub studio breaking out on their own.Anime is full of time honored clichés that never seem to die and Dragonar Academy is so packed full of them it shows just how void this show is of any shred of creativity or imagination. Giant bouncing breasts on all women characters, naked magic girls showing up from nowhere and mood swinging tsundere character clichés are ripe and abound in this series. As C-Station's first produced effort, it's a marginal failure on just about everything it sets out to do. Taking from probably equally lazy source material, the scripts written by Noboru Kimura are shoddy and thrown together with no thought or effort behind them. Many tropes from Mai-Hime which Kimura wrote the manga for are present in this it feels like deja vu all over again.  Basically this amounts to being a fantasy slapped into school setting for no good reason.  There's a large cast of cookie cutter characters that will bore you with just how uninspired they are. We have Ash Blake, typical do-gooder-main character, Silivia which feels like she might have some depth but in the end is a shallow attempt at depth, her loyal maid servant who clearly is supposed to be clever and in on some grand scheme.   This is barely forgivable from a group of first time creators but the fact this comes from several long time animators. Topping off this we're treated to many moments of soft core tentacle porn, a trope you thought would have died out in the 80s but somehow has found a modern revival.  There's so much fan service and tentcle action you'd swear that ARMS was animating this series.  And perhaps the light novel is just as trashy but that hardly excuses it.Animation and art is just as lazy with ugly looking dragons to top off the grossly exaggerated character designs. One would think with a show centered all around dragons it would be the one thing you could get right. Half the time you won't see any dragons and it will be mostly focused on whatever lame slice-of-life scenarios ripped from every other show of it's kind.  The dragons are oddly colored and look like they're stained in hard water spots you'd find on a mirror and the characters are stiff.  I'll admit I do like some of the deisngs of Anya and Siliva but that's about it. The music was about the only thing memorable about it, at least the score was, the theme songs were typical J-pop song that feels the need to shorehorn in the entire cast for some odd reason.  I can't imagine every seiyu in Japan has singing talent yet it seems every anime that features a pop opening has to use its cast for some reason.Dragonar Academy is uninspired, lazy and contrived. Beating down dead clichés that have saturated the market of the last couple years alone this would barely make the grade for a crappy one episode direct-to-video, forget a 12 episode season. Perhaps it's not fair to compare or expect C-Station to be the successor to a studio I adored which made most of its work with the very auteur director Koichi Mashimo but it goes even beyond Bee Train now as we are seeing the potential end of Studio Ghibli and in this era of remakes, reboots and horrid stuff like this we need these creative forces more than ever but as long as the otaku keep running things expect more of the upteenth light novel adaptation hopefully those will have a little less soft core and a little more plot.

By far one of the most generic fantasy animes that I have ever had the displeasure of starting. With the way it is going, it seems more like a parody of the cliches in fantasy animes than an actual show in itself. Two epsiodes and you already have: dense boy, random tsundere princess, magic, a highschool, a magical highschool, barely legal loli, dragons, barely legal semi-dragon loli, panties, string panties, big boobs, generic masked effiminate evil mastermind, a tournament etc. Story This show can't decide which other fantasy series it wants to copy more from. So far it resembles the Familiar of Zero the most, with everything from pink haired, flat chested girl who refers to her partner/slave as "dog" to a princess who randomly falls in love with the protagonist for no apparent reason. There is zero creativity in the story. Not even the general plot is unique in any manner. It is the absolute, perfectly generic cutout for a below average fantasy anime, cliches and all. Nothing about the world is explained, or the magic system, or anything really. Its like the viewers are expect to  know how their world works before they start the show. Unless they explain components of the world as the series goes on, it will truly be a disappointment (i.e. there is still a chance of recovery...) Update as of episode 5: Yeah about that chance of recovery...not so much. Animation One of the worst animated shows I have seen in the last two years. I do not know what the budget was for this shows' animations but, wow. Animations are choppy and character designs are so generic they hurt the eyes. There is basically no fluidity in the movments of the characters and very little depth added into the effects. Background detail is nonexistent. Not much more I can say here until more episodes come out. Sound Ok this section gets some points because the ending theme is catchy, character voice acting is decent, and the opening is not to bad for something as generic as this show. Actual in-anime sounds are horrendous. Very little effort put into aby of the background music. Characters You know what the anime world was lacking? A brown haired, big eyed, over passionate brat who is so dense he has his own gravity feild. Yeah, we didn't have enough of those as it is for sure. Of course lets not forget the snagletooth, dragon loli girl with...wait for it...pink hair. Sounds familiar? Probably so (Familiar of Zero)...not to say that it is a carbon copy but it is close enough to deserve mention. Currently, I am waiting for more cliches to show up before I expand my review anymore in this section. Conclusion If there was a generic method for being generic, this show is that. Although that statment alone does not describe how bad this show is turning out to be.

While I would've like to see more of this anime, its not really all that good or amazing. Unfortunately this ended up being one of those TimeSlot filler anime.  Essentialy everything is generally safe and produce in a cookie-cutter fashion. While it does hold the potential to be something great it leaves itself fairly average with only ever really touching the surface of this series.  The characters are all what you'd expect and we unfortunately never get deeper into various relationships that are foreshadowed. A great many things are also teased but never truly discuss. Overall it doesn't do anything to really excite or envoke the imagination and instead play's it safe with things that have worked in the past creating an anime that you wish they'd spent more time on. 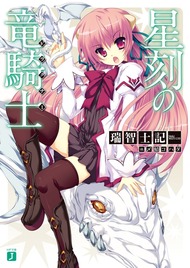 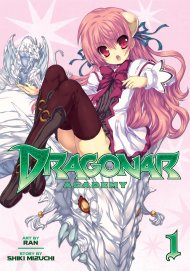