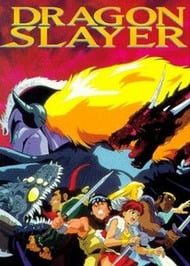 StoryThere are good fantasy series out there: Escaflowne, El Hazard, Record of Lodoss War, Five Star Stories, to name a few. Then there are bad, average, and totally generic series such as Dragon Slayer. The story, to start out with, is unforgettable and boring. Evil demon takes over kingdom, young prince escapes, grows up, comes back to kill demon and save kingdom. Add swords and monsters and mix well. There truly is nothing unusual or unique to mention about the story. You could watch one or more of any of the above series I listed, and already have seen enough fantasy to not have to suffer through this. In addition, the action and fighting sequences are horrendously paced. In this world, it seems people can fight at the speed of light, killing each other in mere seconds. There is little to no character development, and any attempted character development seems forced and is ineffective. I wish I could write more in this section, but it is so generic that there isn’t really anything else to point out. Generic fantasy plot, no uniqueness, little character development and unrealistic fighting sequences give the score of 3. AnimationThe animation style is old looking and incredibly average on every level. Dark colors were used for the majority of the OVA, with very cheesy scenery effects. In particular there is one scene where the sun is going down, and it looks like it was made in MS Paint. When monsters are killed, a lot of the time they just disappear ala FF3/6 style. I kept waiting for the Final Fantasy ending music to start playing, but alas, no dice. SoundUnforgettable and boring synthy music that I don’t remember at all. It is rare when music is that bad. I watched the dub, and the characters, while very funny and fitting, did not fit the appearances at ALL. One exception was the old Rias, who was very convincing. But as far as Sirius and his sorcerer friend go, their conversations were very amusing, but seemed very wrong on the bodies. CharactersThe characters in Dragon Slayer are all incredibly shallow and 2-dimensional. You feel no empathy or ties to any of them, since they all are basically flat. Rias is the only remotely interesting character, just because he has a cool voice actor. The sorceress is remotely entertaining, but is very man-like and awkward. The attempted relationship between her and Sirius seems forced and unrealistic, and makes the character development seem that much more cheesy. I don’t know, I felt very unattached to all the characters and feel like they were very poorly created in general. OverallDragon Slayer was really bad on basically all accounts. If you are looking for a good fantasy series, there are much better ones out there. Animation was average, music sucked, characters were shallow, and all in all, this was just ... bad. Stay away from this one, unless you are masochistic or really want to kill time.