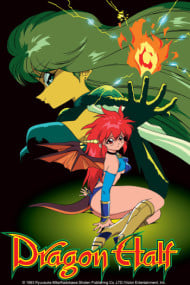 Meet Mink, the hyper fire-haired teenage daughter of the world's greatest dragon slayer... and dragon! With the blood of both human and dragon flowing through her veins, Mink’s life is anything but ordinary -- especially since she’s in love with Dick, a musical dragon slayer! With enemies at every turn (including the half human/half slime princess Vena), Mink must try her hardest to win the affection of a man who wants nothing more than to see her dead. Can she win the guy without losing her life?

StoryI’ve heard about Dragon Half for quite some time now, and have seen it recommended for a variety of series I’ve enjoyed. Thus, I finally decided to pick it up, and I’m glad I did. Dragon Half follows the life of Mink, a half human/half dragon, as she tries her best to get the attention of Dick Saucer, a dragon slayer with a penchant for music and concerts. Due to her small problem of being half dragon, this of course causes plenty of mayhem to occur including assassination attempts on Mink’s life, rivalry from the princess of the kingdom who herself is half human/half slime, and various battles in a great arena! At its core, Dragon Half is definitely 100% random comedy in the vein of Suddenly Princess and Elf Princess Rane. Though there might be a fairly weak "plot" (the king is out to have Mink killed for an old grudge against her mother, Mink wants Dick (haha, that sounds really bad)), the majority of the appeal of Dragon Half is for watching the utter randomness that happens all the time. Funny captions, chibis and hilarious moments can be found all over the place, and it works completely. I found myself laughing out loud on a variety of occasions, and would probably watch it again. The humor meanders into places I wouldn’t have expected in an anime, such as one of the characters taking ex lax on accident and having to run to the bathroom, cursing all the way. Or, a flashback to Slimeopolis where a group of slimes are discussing becoming human. It seemed like every scene had something random in it, for the most part. The only downfall of Dragon Half is, like many other series out there, that it has no ending. For the life of me I can’t figure out why this wasn’t more popular in its time, which could have warranted more episodes to be made. Instead, this wonderful OVA seemingly fell by the roadside, and that’s a shame. It is for this reason that I gave the story section an 8.5 and not higher for sheer humor. Even without an ending, however, Dragon Half is definitely something you should see. If you enjoy random comedy and have an hour to spare, the wackiness will definitely warrant a viewing. AnimationIt’s old, but the animation still shines for what it needs to: the randomness. In general, Dragon Half polarizes between two styles of animation: normal, and chibified. Unlike some series where the chibi aspect is only a small amount, with Dragon Half, it’s pretty much half and half with the normal stuff. This could be one of the best appeals about the OVA, but it could also be a weakness, depending on how much you like chibi characters. Personally, I found it to be amusing a lot of the time, but still thought it was a little excessive and could have been toned down a bit. The most amusing part of the chibi scenes is the fact that often, the chibi characters are mixed with regular looking ones, causing the scenes to be even more humorous. Colors are all over the map, but are generally bright and interesting. Character designs are definitely a bit weird, with eyes that don’t quite fit the body and excessive roundness and pointy features. Then again, the characters are morphing so much, this doesn’t really matter! My favorite part of the animation was definitely all the cute creatures and monsters, which definitely reminded me of Jewel BEM Hunter Lime. In general, this is an anime that prides itself on the random humor, and the animation was very complimentary to that fact. SoundDragon Half fits into the category of "good music for the mood, but uninspiring". Though the synthesized orchestral and pop-y beats fit in the background nicely, they weren’t something I remembered as being fantastic. In fact, after seeing the two episodes, I had to go back and skim them again to remember what the music even was! Nothing much else to say about it, it was fairly unmemorable. In addition to the 5.5 I’d give for the music, I’m bumping it up to a 6 because of the wonderful voice acting talent. I recognized plenty of the seiyuu and each one played their part very well. CharactersDragon Half isn’t something you’d watch for plot, and thus, it also isn’t something you’d watch for the deep and complex characters. Then again, the characters all are remarkably hilarious in their chosen roles, which makes up for it! Each of them has their own quirks like the half slime/half human princess who has hilarious flashbacks of her past life, the musical and confused Dick Saucer, and Mink’s parents who are always fighting. Yes, I did say Dick Saucer! Though his name was translated as such, there is a scene where Mink is holding a flier that clearly says "Sother", though I’ll refer to him as the translation suggests instead. The character interactions are over the top and amusing, especially Dick and Mink. The ex lax scene near the end of episode 2 is easily one of the funniest things I’ve seen, especially due to the interactions of the characters involved. The bad guys, though bad, are still likeable and funny, and the monsters are also well done and entertaining. If you want deep, introspective characters who all have a past and story to tell, don’t watch Dragon Half. If you want hilarious characters that have excessive stereotypical roles, don’t hesitate to pick this up. OverallWhenever I’d hear about Dragon Half, I’d be told how much I’d enjoy it. Needless to say, I’m glad I finally believed people and checked it out. If you are a fan of random humor and pure spasticness, you really much watch this. Even for its age, the animation contributes to the humor wonderfully and the characters are all top notch. In the mood for a laugh? Dragon Half is for you.

What I Liked: That ending theme. Funny cast of goofy characters that seem to parody RPG tropes. Good animation for the time, with a large amount of shots of super-deformed characters and slapstick comedy. Kotono Mitsuishi as Mink. The humour is spontaneous and occasionally bizarre. Great character designs, even with Mink and Lufa's...um..."revealing" designs.     What I Didn't: The second half is much weaker than the first. The fact it has no conclusion: it ends with the MC winning a tournament that has nothing to do with the People Potion plot. Gets weirdly fan-servicey in the second episode.         Final Verdict: In a genre full of serious good-versus-evil tales, Dragon Half prides itself on being utterly irreverent and ridiculous, utilising constant chibi shots and frenetic slapstick humour. Unfortunately, this 2-episode OVA ends abruptly which is just simply disappointing.

This is the adaptation of the first chapters of the homonymous slapstick/erotic comedy manga. It is meant to spur you into getting the manga, as it is left intentionally incomplete. STORY SECTION: 5/10 (7 in the manga) [You won’t find many comedies that actually have a good and continual story like this one.] The story takes place in a JRPG world, where everything is a weird mix of the middle ages (castles, dungeons, roaming monsters) and of the modern day world (airplanes, music concerts, televisions). Everyone is dressed in the Japanese sense of medieval fashion, with lots of leather and quite body-revealing outfits. Mink is a sexy, scantly dressed Dragon-Half (half dragon/half human) and has a crush on a bishounen dragon slayer/pop idol. She embarks on a journey to find a magic potion that can turn her into a normal human girl, since she inherited horns, fiery breath and reptilian tail from her dragonic mother. But many want to kill her. A sleazy king who wants to seduce her mother, a princess who wants to keep the bishounen for herself, the bishounen himself because he is a dragon slayer and the minions of the supreme demon lord. Although only two episodes long, there are many story elements and revelations that make this little series interesting. But since it ends incomplete, the story can’t get a higher mark than the base. The story in the manga continues with far more interesting story arks and revelations, giving this comical series a very good story. ART SECTION: 5/10 [Comedy and fan service are the center of attraction and everything else around them is left intentionally amateurish.] As a whole, the animators didn’t bother much in providing quality graphics (they are terribly simple). The characters are drawn in very simple ways and get really chibi when something funny is going on (which is like 70% of total time). When ecchi scenes come along, the body anatomy of the girls improves a lot (proving that the animators were not amateurs) and we get decent fan service. But even then, the girls simply look kawai (big eyes, innocent look) and not realistic; so don’t expect Playboy realism. SOUND SECTION: 7/10 The tones of the voice actors vary from serious to squeaky, which is meant to be funny when a joke comes along. It is a decent attempt but nothing more.Sound effects during the episodes are quite mediocre.The opening song is nothing much but the ending is a comical version of a famous music composition (the 9th Symphony, I think), which is crazy enough to stick to you. CHARACTER SECTION: 7/10 (8 in the manga) [They are all quite silly; you won’t find a serious character here.] All characters are funny representations of JRPG stereotypes. As far as classes go, most are specialized fighters or wizards. As far as races go, we have several typical members of all the renowned races (human, dragon, elf, ooze, demon) as well as hybrids of them (half dragon, half ooze).None has a decent backdrop story or character development in 2 episodes but the manga fleshes out several characters and adds twice as many more, making a very interesting cast. Again, for a comedy, it packs a very big and interesting cast.But even without all this fuss, the love-struck Mink, her unfaithful womanizing father, her lesbian friend and her hard to get love interest are very funny and above average characters. VALUE SECTION: 4/10 (6 in the manga)Pretty low on rewatchability, as it is very small and incomplete. The manga is 10 times longer and complete and has a generally higher chance of rereading it. ENJOYMENT SECTION: 8/10 Depending on your personal taste of humor and ecchiness, the series varies from hilarious to lukewarm. I personally loved it and enjoyed it enough to be interested for more. SUGGESTION LIST The manga version, which is far longer and complete. Slayers and Mahoujin Guru Guru. Fine RPG parodies. 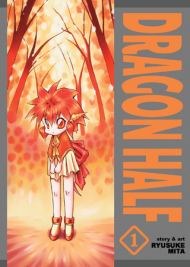