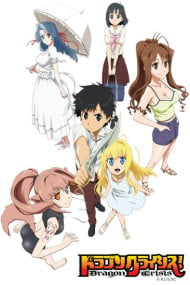 Beauty on the Beach

Attack of the Wolf

The Truth about Wolves

Dragon Crisis is anime done on the run, using an established but tired formula. If you are fans of Fate/Stay Night, Shakugan no Shana, or Toaru Majutsu no Index and your expectations are not high, you may enjoy it. If you like good storytelling, deep character immersion and plot twists then don’t even bother.It’s you know, the usual deal, let’s have some dork being surrounded by pretty chicks for some unimportant reason and then let’s focus on random silly adventures and fan service. But to be honest, I liked the reason the main girl is so fond of the otherwise boring lead guy. When she hatched from her egg, he was the first person to see and according to “imprinting” she now considers him her daddy. Ok, I admit, that makes some vague sense than all those other harems where they dig the guy for no sane reason. Other than that… I did say “hatched”, didn’t I? She is a dragon you see, who looks like a loli just because this is a harem show. And she breathes fire from her… hands. And loves to get all fuzzy (and usually undressed) with her “daddy” in a most un-fatherly fashion. She even wants to marry her… father. Said father, as usually, almost has a heart attack every time he sees a girl’s privates. That doesn’t sound like a healthy reaction for a parent towards his child. Fail of a human species but then again this is why it is a harem and not a hentai show. Anyways, he is also one of those leads with a special hidden talent (and an extremely broken power) who gets to use it in order to save chicks along the way and increase his harem size by one every two episodes. The story is as I said some poor excuse to have moe and fan service all over the place, forced as usual. The show is divided into story arcs of one to three episodes each, where some supernatural chick has an issue with the lead and they fight for awhile before she succumbs to his genericness and follows him around thereafter. The script is very loose and superficial and despite the efforts at building tension and drama, everything is quite childish and silly. The battles end up having no excitement at all, while the emersion to the personality of each girl is rushed and buried under the whole silliness of the show. All those are expected from a franchise which doesn’t want to experiment and just rehashes the same old boring stereotypes. This thing was made by Studio DEEN, one of the worst in production values yet famous for fan-catering its audience with lots of retarded pseudo-serious softporns. The main loli is also voiced by Rie Kugimiya, who pretty much does the exact same voice in all her loli tsundere roles and ensures high sales amongst the 2D pedophiles but otherwise has no variety or depth in any of her numerous roles (with Toradora being an exception). I loath both studio and voice actress and one doesn’t even need to wonder what kind of a shitty show he is going to watch if he hears any of these two names. May they both burn eternally in HFIL. I’ve seen the exact same thing a hundred times before in the exact same fashion. No innovation or even experimentation at all; they just changed the names and the hair colors a bit. This is nothing but an early Mortal Kombat game color swapped ninja costume; thus, little to no enjoyment. Enough with these Shana/Taiga/Rose clones and Fate Stay/Index rehashes. Try something different you lazy bums! SUGGESTION LIST Fate/Stay NightShakugan no ShanaToaru Majutsu no IndexToradora

I really dont like giving "dislike" reviews. It makes me look like a prune, but I just gotta do it. Take in mind that this review is highly... subjective (my opinion). I think that most people will agree with me, BUT if you think this will be or was a good anime, then by all means: have at it! I'm not going to try to stop you from watching things you enjoy. Im trying to save people that understand what im talking about from wasting their time. I dropped at episode 8. I want to go ahead and say, that I am very sorry if you find my review to be unfair, but :) now you have been warned. Story: The story in itself, is pretty good, although its wrapped around the whole "bunch of girls around one guy" thing. Maybe for the first decade, but now its getting old. If its going to be done now, its gotta be done super good or with an inovative component. The whole thing about how the dragons (can) exist in human form, and the breakers, and the organization the breakers are from. The premise is unique (except for dragons). This organization hunts rare treasures that give the bearer powers. These people sometimes fight each other or fight together, or sometimes do other things besides fighting. Animation: The animation is bright. Its fine/good. Sound: Nothing special. nothing out of place. Characters: The characters fuck everything up. I dislike every single one of them.  I tried so hard to look past the constant "ryuji~! ryuji~!" coming out of that blindingly blondish ijit. The voice actor.. well lets just say that the voice actor's high pitched voice is increasingly annoying. Not only is calling someones name 10 gigajillion times unbearable, but they have to throw in the squeakness too. Im not saying the voice actor is bad, but im just saying that the person that picked that person to play that part... either has superiorly different taste or ideas/etc, or they dont know what they are doing. While im on voice, ryuji's voice makes him look even more indecisive. Ryuji himself is an idiot, as always is the main guy character. Just saying: you dont get any relief in this anime. If you want that, search code geass, death note, detective conan, etc. The older sister/cousin character basically rules ryuji's life. Anything she says should be followed as if she is an angel sent from God. "thats what being young is all about" she roughly says. And I say: "yeah... because you definately know what its like to be surrounded by a bunch of girls that squeel your name 24/7". Maybe im exagerating or not explaining it exactly right, but if you watch, you will know what im talking about. Oh, you could say she is trying to guide him properly... well if you consider one idiot making another, then yeah. she guided him properly. The childhood friend girl that "loves" ryuji is typically bashful as well. There is absolutely nothing special about her, besides her amazing potential to be in a hentai. Her friend is always trying to help her get close to ryuji, and does things that contradicts that very goal. There is a redhaired (pink) girl that comes along, that fires a remote controlled missile at ryuji, as a means of testing him when she first meets him. Its kind of crazy, but its not the good crazy. Its just dull. there are some animes that can pull of the "crazy bitch". This one didnt do it for me. That reminds me: This anime makes me think a lot of times: Its like a bad joke, that even after the bad joke has been told, it continues to do more of the like. Already in a wierd uncomfortable environment, more bad jokes keep rolling out. You keep hoping to see the light at the end of the bad joke fog/tunnel, but it never comes. OVERALL: This is a good anime, except for the lack of depth/interest from the characters. To me, the characters are very very important. For example, In the anime, gosick, i dont really like the setting because its in the past with horses and carages, etc, but because the characters are half decent and the story is not incompetent (not to mention a good voice actor that suits the main characters), I can push through it without having to worry about "pushing through it".

This series started out with quite of bit of promise. The world in which this takes place in seems to be pretty interesting- "lost preciouses" floating around the world which have untold powers, a "society" of people, breakers, that have the ability to use these lost preciouses or would like to research them. Anways, on to the review... Story: 4/10 This is a very disappointing story. The premise was very strong, and the first arc was somewhat decent, but all they do is build a few new characters in the following arc and the final arc is... horrible. They manage to survive through a plot device, after the main character does something stupid brought about by another plot device. This story is just not alll the great. Animation: 7/10 This series employs a slightly unusual or non-mainstream art-style, but most of the action is well done and the character designs are fairly unique and attractive. Nothing that would be a game changer, if you will, but it was well done. Sound: 7/10 This series brings in some big names, such as Rie Kugimiya, Yukana, Yui Horie, and Hiroshi Kamiya along with some catchy OPs and EDs. The sound in the series isn't overly awe-inspiring however. Characters: 4/10 Some of the characters in this series are fairly good... but too many lack any depth, are too cliched, or just not needed. Ai, despite having a bit of depth, could have been dropped from the story and everything would have been fine. Margura was an ok character, but lacked a reasonable amount of depth. Ryuuji's parents, these bad-ass breakers, barely even make an appearance and then just disappear. Eriko just hangs around for no real reason and is given basically no depth. Overall: 5.5/10 Well, this series was, for lack of a better word, an utter and complete disappointment. And that's all I really have to say for it. 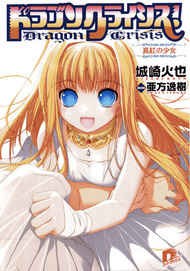 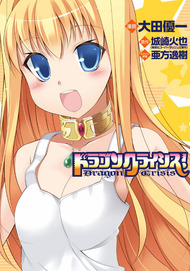