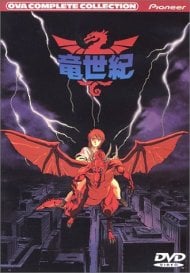 In present day Hokkaido, dragons have begun to appear and are being mercilessly slaughtered by the humans. For one dragon named Carmine, his centuries of life will include witnessing the death of his mother and closest friends, utter destruction at the hands of invading demons, and the companionship of young women who have captured his heart. Dragon Century follows Carmine over the span of hundreds of years, as he watches the world grow and change, and upholds his vow, above all others, to protect it from those who would destroy it...

StoryWow. I was told to watch Dragon Century from a friend that has similar tastes, but I must say I was skeptical. I've seen quite a few older series and for the most part, I've found that most of them are quite crappy or uninteresting, or crude in some fashion. What a surprise when I finished watching Dragon Century and found myself thinking "wow, that was fantastic!" It's very hard to describe the plot of Dragon Century, since the two episodes have hundreds of years between them, and have a very unique feel. In the first episode, we see a very apocalyptic look at Hokkaido, where dragons have begun appearing and are consequently killed off. We are introduced to Riko, a young woman who thinks the city and humans should be destroyed. During a battle with a dragon, Riko is nearby and rescues a baby dragon, newly hatched, while its mother is killed in front of them. Riko raises the young dragon, and ... well, I can't say more or it would be spoiling. Needless to say, there is plenty of gore in this episode, and in general is dark from beginning to end. The second episode, on the other hand, is quite a bit lighter in tone, or at least it is at first. Hundreds of years in the future, we meet Carmine again, but he's all grown up and living in a tower. A young woman comes to steal his horn, thus intertwining Carmine into her life -- a life that revolves around playing a dragon versus dragon type game in an arena. Various things happen, and the mood turns dark again, only to end. I guess I should say only to not end, since Dragon Century, like other short OVAs out there, has no ending. It's really a shame, because most short endingless OVAs are awful, whereas Dragon Century, like Mighty Space Miners, was quite good and deserved more. I'd honestly replace my VHS tape with a DVD if I could. Dragon Century is a little bit of everything. It's horror, it's sci fi, it's fantasy and adventure, and a whole lot of action and drama combined. It had such potential, but was cut short. The only negative I'd say about it is that I felt the first episode was more like jumping in at the end of a movie, but because of the span of time that passed before episode 2, it just helped the OVA seem that much more epic. A great score for a great OVA, it's just a shame it has no ending.AnimationVisually, Dragon Century is somewhat poor but still interesting. The colors are very dark for both episodes, even though the second episode is less dark in mood. The first episode feels like it takes place entirely at night, while the second episode focuses more on the arena and things during the day. Character designs definitely show their age and aren't very detailed. The dragons were the definite highlight, looking majestic and badass at the same time. The monsters were horrific and sometimes wacky (the main guy in episode 2, for one), with the occasional tentacles coming out to play. Episode one is the most grotesque in general with plenty of bodies exploding and teeth ripping out of people's faces, including one woman who had a spiderlike thing rip through her and walk away. Wow. Definitely along the lines of 3x3 Eyes for how graphic it is. The backgrounds and scenery were beautiful, even with the age, and the last shot of the second OVA strongly reminded me of the hanging tree in Berserk, which was also a definite plus. Though the animation might have been poor, it still fit the OVA perfectly.SoundThe music definitely wasn't the strong point, as most of the time there was no music at all (except perhaps crickets chirping and such). The normal music was very synthy and very 80s sounding, with nothing unique or unusual to make it stand apart. Granted, I can't think of anything else I've seen in this time that has had much more interesting music, but it still could have been a little better. The voice acting was great for everyone.CharactersIt's hard to discuss this section because the characters are different in each episode. Carmine is the main character in both, and you can tell how much he has grown from the first episode to the second (surprise surprise, given that it's been a few hundred years!). We watch him grow and change, and I found myself becoming attached to his character after only those 50 minutes. We are introduced to two females who both have a fairly dark past and we come to feel sorry for them after each episode has passed. The relationships between Carmine and the girls are touching and tragic, and get to you. The other characters including the villains aren't very important, it's the two girls and Carmine that matter, and they were introduced and developed as much as they could have been... and it worked.OverallOverall, Dragon Century is a gem that I'm very glad I had the chance to see. My only regret is that there was no ending, else this would have had enormous potential to continue with more episodes. Though the animation and music might turn you off, tune in for the wonderfully epic story and the characters and you'll be rewarded. Just keep in mind it's very, very violent and disturbing at times. What are you waiting for? Check this one out.