Dracula: Sovereign of the Damned 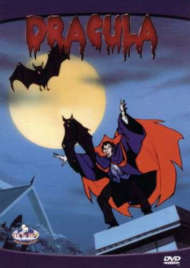 The bloodthirsty Dracula has fled his castle in Transylvania and arrived in Boston, where he steals the would-be bride of Satan from an evil cult. However, he's instantly stricken with love and is unable to kill her, ultimately producing a son, Janus. Now, Dracula has a number of beings after his life including Drake, a human ancestor of Dracula; a pair of vampire hunters who're out for revenge; and even Satan himself. Will the tragic Dracula live to suck blood another day, or leave his son fatherless?

That this TV movie exists baffles me. Marvel has always had problems with its adaptations before Iron Man, but this may one of the most bizarre examples I can think of.             Tomb of Dracula was a Marvel horror comic published during the 1970s, when American mainstream comics were allowed to tackle darker, though not necessarily adult, themes. This was the time when Tony Stark became an alcoholic and Peter Parker agonized after the death of Gwen Stacy. The Spiderman Japanese live action series was massively successful in Japan, but this does not explain why Dracula exists.             As an animated movie from Toei (I am not surprised), Dracula is incompetent in every way. The animation is clunky at best, the character designs are goofy and confusing, the coloring is drab and saturated, and the presentation is cheap. I believe that more Marvel characters would be better realized in animation than live action, but I can’t think of anyone wanting this movie. If this is the best that fans were going to get, I would have been pissed off.             As a story, Dracula is baffling. The story is too busy, as the comic ran for 70 issues! The series had ended before the release of this movie, so the screenwriters should have known what to include and what to leave out. Characters are introduced, only to have nothing done with them, and events are sequenced seemingly at random. I don’t blame the bizarre nature of the story solely on the animation, as Marvel comics of this time period were allowed to have strange stories. That the story is so condensed means that the movie becomes a highlight reel of the absurd series. The best example of the lack of logic is this: Dracula is a minion of Satan. Dracula steals Satan’s bride, Dolores. Instead of killing her, Dracula marries Dolores and has a son, Janus. If I had to think of someone to protect Janus, who would that be? Certainly not Satan, who I had stolen Dolores from as a sacrifice! That is exactly what Dracula does. And yes, Dracula munches a burger in a diner.             Q: If Dracula is a bad animated movie, what makes it worth watching?             A: Dracula is an amazing experience. From the subpar animation to the baffling story, Dracula is one of the few anime to rival Garzey’s Wing and Kimba, the White Lion in sheer lunatic fun. I was never bored and was excited to see what the movie could hit me with next.             Unfortunately (and fortunately for those who want a good Dracula movie), Dracula has only been released on a rare VHS that is very expensive. For anyone wanting to see this tragedy for less than $100, YouTube has this movie for free. Surprisingly, Disney and Marvel have not taken this down (I wonder why?).             For sheer lunacy, Dracula: Sovereign of the Damned is the best antidote to any serious mood. If you have any vampire fans that you want to annoy, invite them over and don’t tell them ahead of this movie ahead of time. Their expressions alone will be priceless.

Everything: Check this out. Taken out of context and based on this alone: 10/10 Taken in context: 10/10 Two creeps and a guy in the window unseen watching Dracula eat a hamburger: 10/10 Dracula eating a hamburger: 10/10 You just saw the movie, which is a bunch of shit leading to Dracula eating a hamburger, where it should have ended but it went on for 20 more minutes. What it did after Dracula ate his hamburger, I have no idea. I lost interest because I sat through 50 odd minutes to watch a few seconds of Dracula eating a burger. Sure there were wheelchair fights, a guy fighting a guy in a wheelchair, dancing and some other shit but damn, if the movie was just Dracula sitting in a restaurant eating his meal, that would be a 10/10. In all seriousness, Dracula is eating a hamburger.