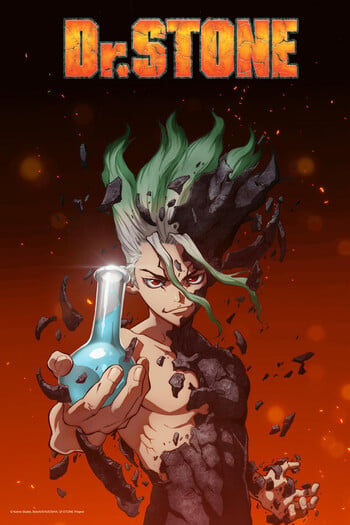 I was initially drawn in to this anime due to the unique plot & setting but also due to the very beautifully drawn backgrounds that had some really spot-on lightning. Unfortunately, i soon found out that it would find itself clashing with it's own contrast that is the borderline minimalistic animation, blob shadows and the overall visual designs that most of the character have, being often very crude at times with the females also particularly often being victims to some serious clannad-level derp faces at times with the mouths often going up into their noses while the males almost always remain anatomically correct: 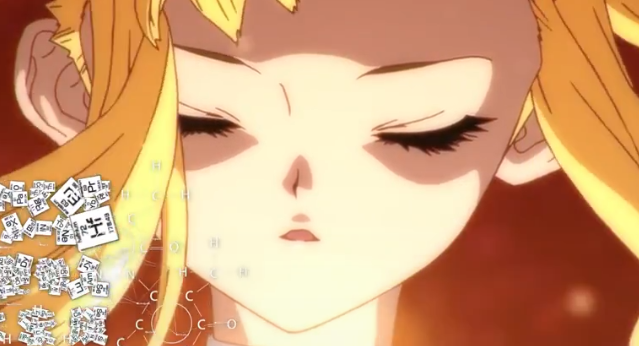 Re-watching a few episodes, it's clear to me the production team was aware of this and to remedy it, they use a lot of "switch/pan to background shots", even during dialogue. You may call this a certain art style if you want, but i don't as it's exclusive to just some of one gender.

Both the audio and characters of the show are very "whacky" generic and stereotypical to the point where there's nothing of note to point out.. Moving on, we have my main gripe with thie show:

As i have to go over things that happen in the anime, what's ahead will be SPOILERS.

The plot is this: Someone or something farts a great big green cloud and all humans & swallows turn into stone.. Or they're encased in stone. One of those two. During this, the protagonist and his side-kick is shown to be concious whilst encased in said stone FOR 3700 YEARS. If you're not big on anatomy or how the brain works, humans are by defacto very social animals. Even if someone is an introvert, cravings for social interactions are fundamental to us as a species and having this get deprived for millenia would make you insane like nobodies business - Look up cabin fever, etc. Second brain related thing is that we NEED it to be stimulated, as it is a muscle. Having this be deprived for millenia would yet again, drive you completely insane and/or make you utterly braindead. They go over how the stone is temporarily healing magick juice when it breaks off some shit so this huge plot-hole can be partially tolerated.

The protagonist manages to make a crapton of these HIMSELF: 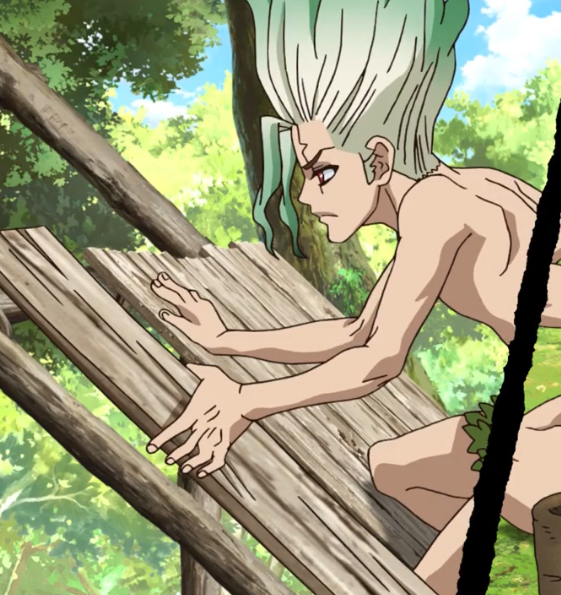 Yes, those are planks. THIN wood planks. He got up from a 3700 year old nap, hurriedly made some extremely crude stone tools with no practice and made a whole bunch of planks, enough for an entire sizeable tree-house as a skinny nerd whilst taking care of all his other needs.. This is discluding the process where you need to dry the wood and if you look really closely, you can see that almost all of them are near-perfect cuts as well all around. This is to be frank, completely impossible, especially the clean across-cuts as wood phloems all align upwards in one direction with EVEN MORE PLANKS inside of the house in the form of shelves.

Everything about this guy. 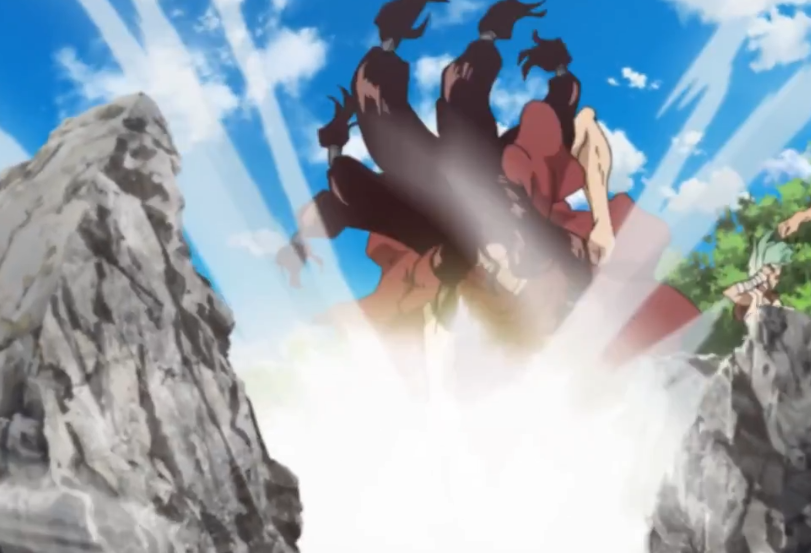 He kills lions and splits 500 kilo solid rock-boulders in single punches. Just makes me sigh in disbelief as it's completely unrelated to the petrification event.

The 300 IQ photographic memory protagonist explaining in detail without fault the "revive human juice" to his nemesis. 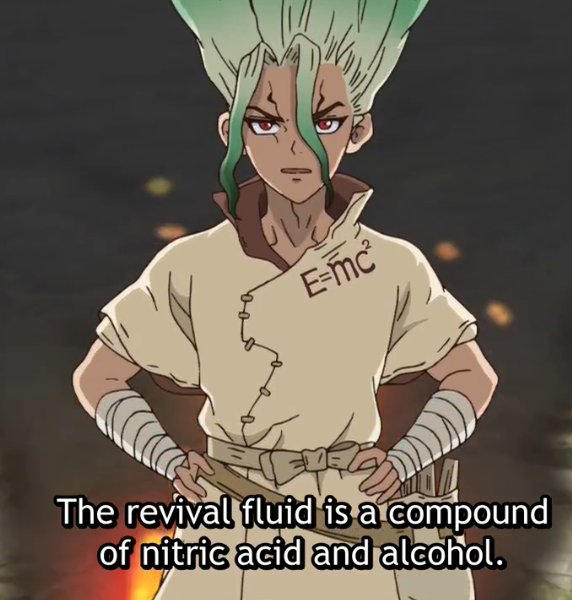 Even the smallest lie would've done it since it's a precise percentage mixture, man. Why be this stupid when you're supposed to be smart?

Contrary to what some people may believe, a lot of elements and minerals are quite toxic to humans depending on their states which made me surprised to find out that this one cave man has been mining and subsequently handling bulks of elements like malachite (and apparently polishing them to a sheen) for YEARS to fill sizable pots with no health effects: 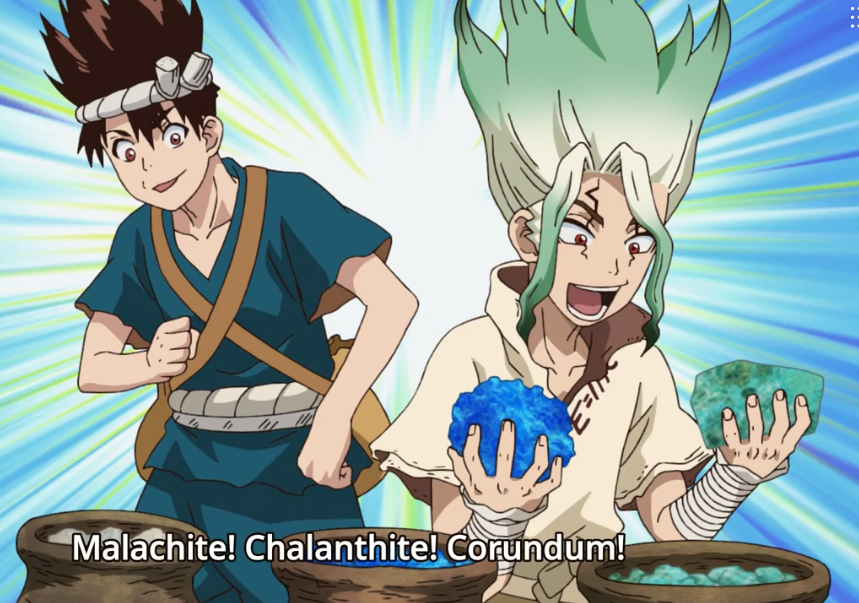 This INCLUDES Cinnabar. Seriously. All some of this stuff requires is slight moisture to begin letting off extremely toxic fumes, not to mention the powder/fragment discharges that happens when you mine and polish the stuff. Ishigami's village also don't have any sort of soap which makes getting smaller bits, powder and residuals off your hands borderline impossible. Chrome should canonically be dead or crippled.

Failure to scavenge. It's only ever poked at 1-2 times: 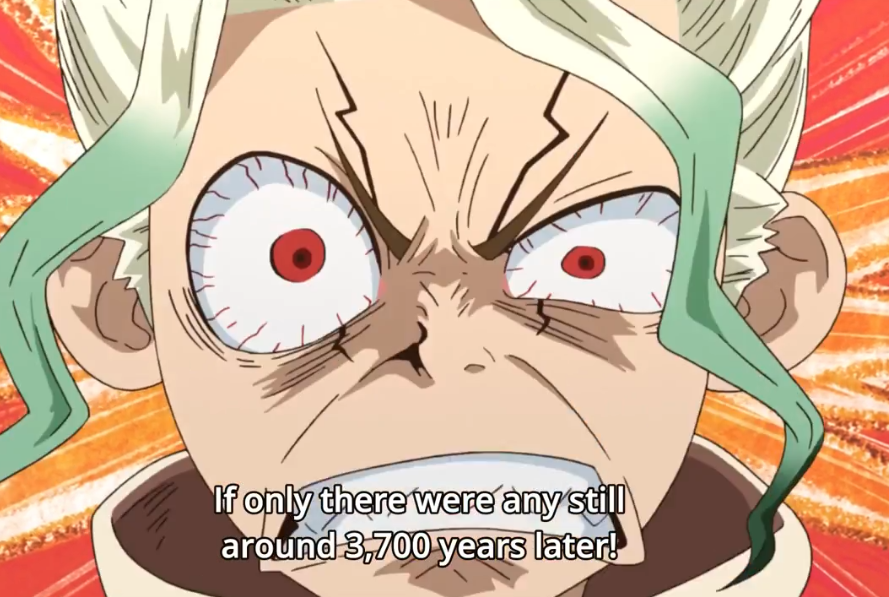 This is probably one of my more wobbly points but this show is basically implying that after 3700 years, all evidence, scrap or modern buildings to speak of has basically turned into dust, leaving absolutely nothing to be scavenged or be recovered (except a small scene where they hump a bronze buddha) .. Well..

Next to all stuff by Romans. Roman concrete be sturdy, yo - 117 AD

Now, not that i am about to go and give the concrete, cement or asphalt we use today any major props because most of it is money-saving cheap trash that rust from the inside due to unprotected rebar but stuff like GLASS has become explosively popular in building construction, not to mention meta materials, carbon fiber, polymer coating mixes, plastics, bricks that ONLY GET BETTER WITH TIME or properly protected, thick galvanized steel beams, etc.. The list goes on, but to give you an example, glass has an expected decomposition time of about 4000 to 100,000 years - Even in a worst-case scenario, that's 300 years off their current time period.

Plastic on the other hand is estimated to take around 1000 years in exposed conditions, but even then they never truly decompose and instead, the material just breaks off into smaller chunks over time - so implying that "everything is fokkin' dust n' gone after 3.7k years brudda" is pretty f*cking stupid.. Especially considering they are so close to metropolises like Kanagawa and Tokyo.

This is just the stuff I've remembered in the first 8-9 episodes. Seeing this happen over and over again can only help me draw the conclusion as to what has happened during production is that they only bothered to hire a chemistry advisor or two and/or some very incompetent/ignored/overlooking professors which is a damn shame as many other elements of the show are so good.

Some education for the people coming in here to drop f-bombs and mindless "I disagree" trash in the comments: This is a show almost entirely focused and revolving around science. The show is EXTREMELY unrepresentative on very large portions of said science, along with failing to be realistic on a multitude of levels to the point where it contradicts itself. Saying "I disagree" in response to someone pointing out huge, factual flaws does not work, sorry.

For your benefit though, here's another example on how the show mishandles something:

Sulfurina. An anthromorphication of sulfuric acid.. Or more accurately, a mixture of hydrogen sulfide and sulfur dioxide that the show depicts to instantly kill & explode your soul upon even getting the slightest whiff of this stuff which is blatantly wrong. Both these gases need to be in very high concentrations in order to be an immediate health hazard which is only really possible inside of very poorly ventilated places and not say, high up on the cap of a mountain with a very jagged rim.

What do they do later in the series?.. Well, they go spelunking deep underground of course! Complete with sleeping in there and lighting plenty of campfires which paves way for the actual lethal gas that can realistically kill you in a very short time during those circumstances: Carbon Dioxide & Carbon Monoxide! More or less the same killy-thing as sulfur dioxide yet it is not even mentioned in the slightest.

This is a spoiler-free review.

Ok, so this is one of my runner-ups for the best anime this season. The premise is pretty simple: everyone was turned into stone statues and our heroes wake up after ages and try to bring back the lost civilization.

The whole show is based on science and scientific discoveries that we take for granted and that have transformed our lives from savage banana-seeking monkeys that we biologically are. Which is an awesome, new theme in anime that has not been explored. What more do You need?

The plot is structured in a few self-contained arcs that are continuations of each other.

The series is set in a world that has, for all intents and purposes, gone back to the caveman era.  The whole point of the story is to get it back to where we are today.

Relationships between each of the characters (especially our two protagonists - in the first story arc) are given adequate time to develop and feel natural. The story sets up their motivations pretty well.

The main theme of the story is to teach the audience about basic science facts (which is awesome) and to show how our lives are different from what they were supposed to be from a biological standpoint. Just for the novelty of the idea, the show is very much worth a watch.

The animation is ... ok ... but nothing truly spectacular.

Characters are drawn and animated in a somewhat distinctive way (I felt it's how the western audience would IMAGINE anime) but they look pretty good after You get used to it.

Having said that this is a story-driven series and it shows.

The sound is ok. It's very, VERY bland, but it highlights the plot points in a way that does not feel jarring or forced.

The characters are the strong point of the series.

First of all the main protagonist is what will make or break this series for You. He is egotistical, somewhat cynical and very capable/talented. Think 'House M.D.' without the drugs and targeted at a slightly younger audience. I liked him quite a bit.

All other characters aren't really worth mentioning - except our antagonist. He is presented as a clear and distinctive polar opposite of the main hero. While his actions may seem objectively insane they are indeed well-grounded in his backstory and emotional traits. Like Batman and Joker, they both complement each other.

Go watch it for God's sake! I don't know if You'll fall in love with it but I can safely bet You'll like it quite a bit.

This anime is completely unwachable. The first episode shocked me actually, so I gave another a try and had to drop it like 10min in. After reading the synopsis I was expecting something much more intelligent. And no, throwing some "science facts" doesn't make it intelligent.  It's neither educational nor entertaining in any way.  Nothing makes sense, the characters are boring and nothing intriguing happens. Maybe this was meant to be a more edgy science kid show for younger audiences obviously. I'll pass.

Unlike many other shows this one is exciting and entertaining and sends you the right message, it evokes emotion the right way, it does what a show should do and it is to ENTERTAIN, the story is unique, if you make a graph for how enjoyable it is to watch, it will only go up, during happy scenes you will be happy, during emotional scenes you will be emotional, and when its time to pump some adrenaline you will get the adrenaline. one billion percent you will like this

the only judge for a show is you! never listen to people's reviews! always test a show, most reviewer here are amateur including me, so you be the judge never listen to anyone

“Dr. Stone” is not exactly a mature-audience oriented title, but the original story and the many unique elements of the narrative make it a title that truly stands out.