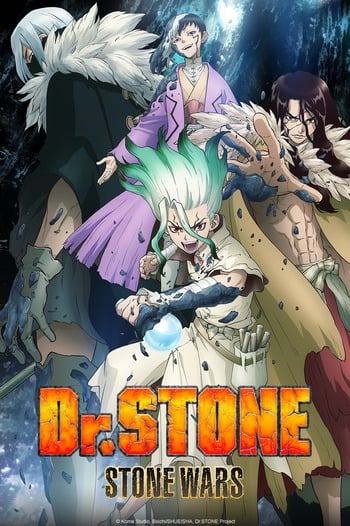 Normal world into a whole new one? Both are alike! Ascendance of a Bookworm is a story of a girl who woke up as someone else, a little girl in a different world, no technology and books are precious. (This is her second life since she dies in the other world by books falling on her-) She has an illness which makes her not able to walk even 2 meters. Her friends are surprised about how much she knows about books. Now go enjoy it!

Both of them turned a civilization upside down with their modern knowledge. Dr. Stone having returned to stone age while Ascendance of a bookworm going back to an era when books were rare.

probably the most like Dr. Stone I could think of. MC uses skills from our world to work magic in the other world

It is a really good story line with accurate information of scientific explanation. You truly fall for the characters and dr stones charisma

The third season of Dr. Stone.

In a primitive age, a boy named Ryuu grows up under the care of an anthropoid ape. He fights against a ferocious dinosaur with a friend and takes off on a journey in search of his real mother.