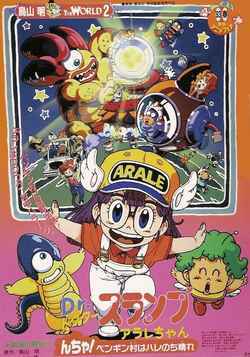 If you're looking for anime similar to Dr. Slump Movie 6: Arale-chan N-cha! Penguin-mura wa Hare nochi Hare, you might like these titles.

Protagonist Eiji assembles "cunninglasses" so he can read his classmate's note about the boy she likes.

Mica Minazuki and Mew Fumizuki are two out-of-this-world high school babes who lead a double life as the legendary Hyper Dolls! These mysterious beauties are Earth's protectors of justice, destroying evil demons of the underworld and keeping the human race safe from harm. With school, festivals, and friendships to handle, will the girls have enough time to save the world without skipping class?

Yoichi Tsuitenai was the unluckiest boy in his hometown. Until one day, his luck truly ran out when he was crushed by an alien spaceship, killing him. But, in this time of need, he was discovered by the great hero of the cosmos Luckyman, who fused with him giving him the power to turn into the universe's luckiest superhero. But now Yoichi, as Luckyman, must defend the Earth from aliens invading to conquer it.

The nerdy Techno Rejiro has lived in his nuclear bomb shelter all his life, monitoring the world outside -- a spectator to life, rather than a participant. One day, a mysterious girl named Hitomi stumbles upon his grounds, thereby opening the door to the real world, figuratively speaking. With his horde of unusual technological contraptions, he sets out to discover why this girl stirs unfamiliar feelings within him, though he might not have her full cooperation...

Princess Lupica's quest to find the most lecherous man in the universe leads her to Ataru, whom she abducts to obtain the most powerful love potion in the universe. Will her schemes to marry the tofu man go according to plan, or will Ataru make a few conniving plans of his own to use the potion to create his longed-for harem? Lum pursues her abducted darling with the aid of Oyuki and Benten, but will they make it in time before everything goes awry?

The often weird and outrageous adventures of Lum, Ataru, and the rest of the residents of Tomobiki continue with an autumn tea party of memories, a sentient satellite seeking dreams, a bureau of rabbits that literally shape the future, a profitable summer sherbet scheme, tragic ghostly romance, amorous personal ninja guards, cooking induced transformations, deadly goats, a candy of love, and a highly contagious yet charming disease.

Ataru, the ever unlucky wretch, has the fortune to be marrying a gorgeous alien princess. Unfortunately, it’s not going to be Lum. At the age of 6, it seems Ataru accidentally engaged himself to a beautiful princess through a game of shadow tag, and being the fool he is, he completely forgot about it until now! However, the princess Elle has never forgotten, and has lived dreaming and waiting for the day when she can come and take her husband. Of course, Lum won’t stand for it, and will stop at nothing short of intergalactic warfare to keep her man!