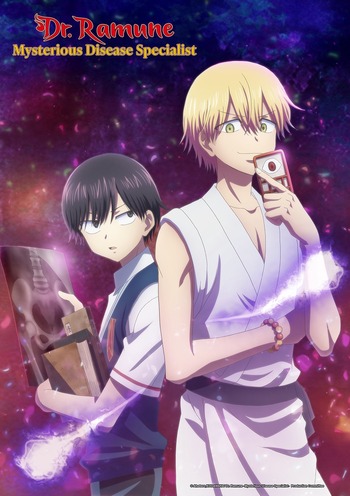 If you're looking for anime similar to Dr. Ramune Mysterious Disease Specialist, you might like these titles.

Weird, eccentric genius-type with a student that follows them around. Ramune gave me huge flashbacks to Ranpo Kitan when I watched it.

main characters of dr ramune are strickingly similar to mob psycho's main characters, and has the same general concept of the main characters taking jobs and helping people in their community (mp100 deals with supernatural things rather than special diseases)

They give off the same kind of vibe and have enjoyable characters. Both shows have like a mysterious aspect and a comedical one. The difference is that Dr. Ramune focuses more on life lessons and being true to yourself, while Toilet bound Hanako has more to do with ghosts and legends. To me both shows are pretty similar, for example, a school setting, and supernatural of the week. The mysterious in Dr. Ramune is like the supernaturals in Hanako-kun. If you read this far, then just try and watch both shows to see if they are similar. They're both in the Winter Season of anime but in different years. Have fun :)

"If you are in need of medical attention, please leave a number where you can be reached, your name, the seriousness of your condition and how much you are able to afford." Meet Black Jack, an unlicensed surgeon whose skills are infamous around the world. Follow this mysterious surgeon-for-hire who travels to meet his 'clients', from rich businessmen with a baffling illness to a group of Military Guerrillas who want to help their leader live long enough to return to their country. No matter the job, Black Jack will help where no other doctor would – as long as you have the cash.