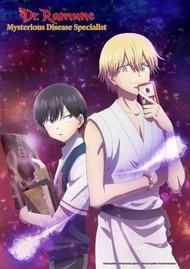 As long as hearts exist inside people, there will always be those who suffer. And then something "strange" enters their mind and causes a strange disease to manifest itself in the body. The illness, which is called a "mystery disease" is unknown to most, but certainly exists. There is a doctor and apprentice who fights the disease, which modern medicine cannot cure. His name is Ramune. He acts freely all the time, is foul-mouthed, and doesn’t even look like a doctor! However, once he is confronted with the mysterious disease, he is able to quickly uncover the root cause of his patients' deep-seated distress and cure them. And beyond that...

I'll be quick with dr ramen(I know it wrong). This was one of the few shows this season that in regretted investing my time.  Lackluster animation, poor sound (but good ep) , mediocre characters and decent story that becomes muddied by weird choices made and experience that can be summed up as dollar tree modern mushi shi but with way less charm mystery and less everything else that made mushi shi an amazing show.  I wouldn't recommend dr ramen but if you do try it out then after 3 episodes you find your self checking your phone every few minutes then drop it, it won't get better.  that was another rapid reveiw so thanks for the read peoples and have a good one

3S review no. 30 (short, simple and sweet/salty/spicy) Ok, lets talk winter 2021 season (Since this is my last review of winter 2021 shows excluding sequels, haven’t watched them yet, I might write one if I feel like I have something to say). So, very lame season when it comes to new shows, pretty much like fall 2020. Actually these two seasons had a couple of similarities. First of all it was all about sequels, fall was all about AOT, Haikyuu and dungeon pick up artist, winter was about Slime san, rinse and repeat zero, the Shawshank redemption nickelodeon edition and Dr Bronze. Both seasons had an overhyped shounen, fall had Jiu jitsu Kaisen and winter had kimono jihen. Both seasons had an anime that attracted attention mostly for its presentation but suffered from god awfully insulting writing, Akudama driver 3 and wonder scrambled eggs respectively. Where am I going with this? Well the point I wanna make is that this makes you looking for something new to watch, and you lower your expectations down to something that is just simply watchable and enjoyable. Fall was slightly better I’d say, since three series fell into that category for me, Moriarty, the psychotic princess on zolpidem (which I enjoyed a lot suprisingly enough) and Heaven's oficial bless you to a degree. Winter had what… the reincarnated virgin and… and this one apparently. Dr Ramune in da House. So is this a great show? No, but it is watchable, and enjoyable, simple as that. Story ain’t very original, its the classic supernatural detective thing, but instead of an investigator, we get a doctor, which plays out exactly the same way, he is not operating or anything, he is just using intuition and mysterious supernatural items to solve the ca...eh cure the disease. It has an episodic nature and that is both good and bad. It’s bad for pacing obvisouly but not all of the cases are interesting so it’s good cause if you don’t like a specific case just skip the episode, you will miss nothing. Not every case is interesting, for example I didn’t like the one with the pepper fingernails or the one with the fuckboi, but I enjoyed the one with the mother with the gyoza ears, and the one with the artistic popcorn machine kid. This brings us to the next point, why I don’t like this show sometimes. It feels very didactic at times, in a very straightforward way which I don’t really like, I mean I don’t really need this anime to tell me that I don’t have to be dick (then what are shounens gonna do? They’ll run out of bussiness… jeez), a prime example was the fuckboi episode. The other episode I mentioned before was the one with pepper fingernails, that’s an example of the shows inability to maintain a certain level of quality to its writing. I mean the “patient” in that episode is just a complete idiot, not plausible in the slightest, and if the patient is silly, then the disease is silly, the cure is silly, hence the whole episode is crap. So, story could have been way better, but still its enjoyable most of the time. Characters are fine, its mostly the doctor and his assistant that you get to see, the rest of them are the clients and some reoccurring minor characters. So they are not spectacular or anything, but they are likeable, they fit the tone of the series, they work just fine. Not much development for the main duo, but you get to see some background by the end of the season. As for the patients, they do develop but it’s like part of the healing process, don’t know if you can label it as actual character development, it’s more like the resolution. Animation is pretty crappy. This show looks like it was made 20 years ago. Yeah… not good. Sound though is… is… very very corny, but I very very like it. You see the show is kinda a corny, so it fits perfect, I also happen to be a sucker for stringed (cello etc) so I enjoyed the music very much. It is kinda serious, but also playful kind of like what the show is like. Opening was ok, they went with a kind of baccano-esque song. Voice acting is very good as well. So, is it worth a watch? Well, the answer is twofold, if you don’t have too much time to allocate for anime and you only watch the creme de la crème then it is not worth it clearly, but if you are trying to spare pick something new to watch from the winter 2021 season, then this is ok, it’s watchable and enjoyable, nothing more unfortunately but nothing less fortunately unlike the majority of the season’s anime.

If you want to learn about life lessons, this anime might be for you. Dr. Ramune was an enjoyable anime to watch, and I looked  forward to the release of all of the episodes. While I wish I could have had a little more input on the main character, the overall experience was positive. It taught me to be honest with myself and that lying has consequences. Since there are just 12 episodes, BINGE WATCH IT BESTIES. The viewer gets to know the characters over time as the episodes progress, but omgahd I'm about to go prepare some of the food because it all looked so delicious. Seeing the consequences of the events that arise is amusing and enjoyable. So give it a shot and see if you like it; if you don't, at least you took a chance and tried it. 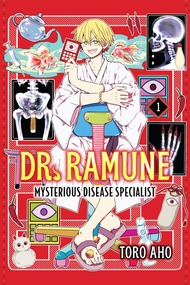