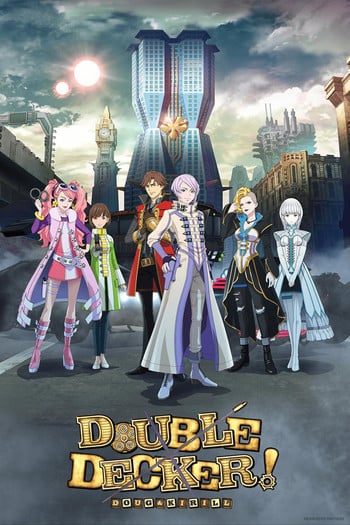 This particular anime was was awesome. The animation was supurb, the quick transition from drawn animation to 3D animation was refreshing. The characters were nicely portrayed and the comical aspect was very well executed. The fourth wall breaking aspect was good as well.

The story is set in a fictional city called Lisvalletta. The anime is about detectives, which are called the Seven-O, it is about the first MC (Kirill VRUBEL) (who looks like a female) and was a former police officer turned detective that now only participates in cases resolving around this new dangerous drug called 'Anthem'. This happened after he was stuck in a hostage situation. While looking for this lost cat on his day off for his old landlandy. This is where he meets the other MC (Douglas BILLINGHAM) the detective that put in a good word for the first MC to join the Seven-O after that incident.

Anthem is a dark illegal drug that is harmful when taken and this drug is spread across the city as there are people who smuggle them, sell them and distributes them. There are stages that Anthem can do to the human body, each stage above is much dangerous then the last stage turning people into werid monsters that have unique ability hence the Monster-of-the-week tag placed on this anime.

The detectives operate in a buddy system which is the double decter system hence the title of anime. Where each detective has their own partner that can help them out in situations that relate to the drug Anthem. The anime is about cracking down on these Anthem drug lords and taking them out so that they rid the city free. As well as Douglas seeking revenge on Good looking Joe.  However, this is also a comedy so therefore expect a lot of jokes riddled in as the MC's are on their mission.

The anime has the modern animation look so it has the classic anime look and feel to it. It also has a mixture of CG animation whixh makes it much better,

The outro music video is a mixture of CG animation as the camera pans arounds the characters posing as they look like figurines stacked ontop of each other. With a mixture of possibale hand drawn scences that haven been edited using computers.

Characters - The Main Characters's only

Kirill Vrubel joins the detectives/police force in order to locate his missing 'sister' but in episode six, he eventually finds 'her'. As well as he is kind of dence as he enjoys being Douglas buddy (detective partner) in operactions and sometime screw things up by trying to arrest people he doesn't have jurisdiction over as he is meant to be an Anthem detective and not a regular police officer. He is the goofy character.

Douglas Billingham is a detective that lost his previous partner thus replacing him with a new partner which is Kirill. He is funny as he is amazing/ an (funny type) asshole to Kirill in situations in order to create comedy. He is the type of guy who does not like to talk about himself so therefore he seems mysterious to his comrades. He seems like he has a bone to pick with this dude called Good Looking Joe.

I'll give this anime an 8.5 as it has good comedy that consists of fourth wall jokes as the narrator intrepts the story to give some incite on the situation. The narrator reminds me of the narrator from the anime We, Without Wings - Under the Innocent Sky. The ending music is bad ass.

Dropped and then started rewatching it, forgetting that I dropped it! That's how memorable it is....it's okay but nothing to really made it amazing. I'd recomend watching when you have nothing better to do

It starts off slow but all over the place, yet by the 4 or 5 episode they start to pull it together and by the end you actually have a thought out story.  They definately develop the relationship between Doug and Krill and you can believe the whole team is a family by the end.  If anything I could do without the 4th wall breaks but they gave it a twist most animes don't have.  The anime style could of been a little better.