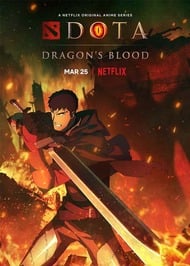 A conflicted yet courageous Dragon Knight must use the power of the dragon within to stop a deadly demon in this epic fantasy based on the online game.

Story [7/10] Loosely based on the video game DOTA, the story follows Davion, The Dragon Knight and Mirana, Princess of the Moon who travel together in mutual interest. They end up at the centre of a battle between powerful beings, and face many trials as each try to figure out, what exactly they should be doing and with whom exactly their allegiance lies. This is an adventure-style, character-driven anime with strong themes of violence. The entertainment value comes from forming an attachment to the characters, including secondary ones, and having an emotional investment in their choices. In this regard, DOTA: Dragon's Blood succeeds, and arguably in this kind of story, that is all that needs to happen for it to be enjoyable. Besides character-building and relationship-building, with plot really as a side-consequence of said building, there are aesthetically pleasing landscapes, many battles and not much else, which, is great because we don't need anything else for this story.  I have played DOTA 2, but honestly, the majority of DOTA 2 players and this includes me, have no idea about any lore. The story doesn't just thrust as many DOTA characters in there as it can, some secondary characters are not from the game. Also, characters from the game have been changed for them to make more sense in the story, basically, DOTA's influence on the anime has been crafted to be good in the story format it's in, rather than just throwing a bunch of DOTA things in to pander to its audience. Perhaps some things will matter more easily to players of the game because they recognise them but that's about it.  Animation [8/10] There is CG which some people don't like, I'm usually indifferent, I care more about what is being animated rather than how it's animated. DOTA features an enjoyable medieval fantasy aesthetic, with beautiful and exotic landscapes, magic is neat but impressive and fight scenes are lengthy and entertaining.  Sound [8/10] It's nice to see English-dub being high-quality, the script is witty and charming, the soundtrack is quite good, everything deserves praise.  Characters [8.5/10] DOTA: Dragon's Blood is intended for mature audiences and many of us who are 18+ or even younger, anime can get quite tiresome with how many of the plots and characters in anime seem to be aimed at people much, much younger than us. Warriors who refuse to kill, gods who live and act like normal, if not lovely people, romance is awkward and cringe, it gets old. In DOTA: Dragon's Blood, if someone is "supposed" to be a ruthless killer, then they act and think like a ruthless killer, no meaningless, mismatching descriptions. Every character has an arc, every character has clear motivations, some characters are witty and funny, others are serious and psychopathic, and it just gets the basics right. It makes me interested and invested, I know what to expect and I can develop thoughts and feelings without wondering which part of someone's character is going to be forgotten about, or which contrived central theme they're going to realise is the correct path moments before tossing aside most of their story and character development. It's basic but I really enjoyed it and it was essential that I did for the anime to work.  Overall [9/10] The overall is not about these previous four categories, some genres don't need these above categories to be good. A comedy should get a high rating if it's funny and witty, despite these four categories. DOTA: Dragon's Blood is an adventure-anime, with character-building and battles that delivers, it's an enjoyable watch. If you like the characters and combat then it's 9/10, if you don't then it's 6/10, that's the difference-maker. If you enjoy the fantasy medieval theme, with some interesting characters having an adventure with lots of battles then you'll like this a lot. Does it sound familiar? Another Netflix production, Castlevania is very similar to this, if you like one then you'll like the other. 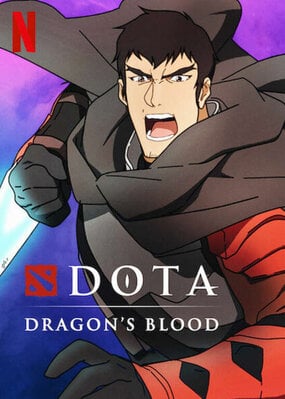