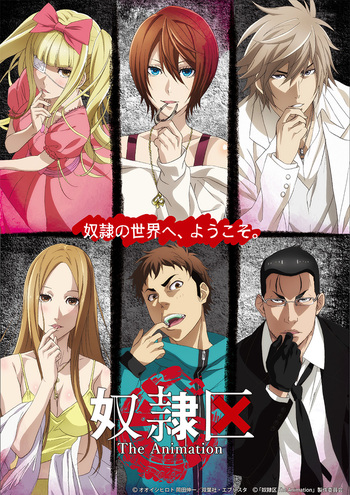 This is a show that at first seems like it shouldn't be a show based on the factors that its based off a manga. That and the fact that I got this on one of my anime forums as my lottery pick so yay for that. Spoilers may be in this review so be warned on that front.

Oh, how I can say this is in a nice way. It's like a basketball hoop with it being too many holes and confusing to understand where is everyone is and doing at that particular episode.

The plot that it's trying to sell seems "interesting" and you do see a variety of games that are played throughout the 12 episode run so I will commend them for that. But a big negative is that it seems to be the only positive in a badly written show. This is for two reasons, the first one being the fact that it has kept changing who we are following in a certain scene. The jumps between these scenes are something that I can only cringe at.

The second reason is their "plot twists" which can be easily seen from a mile away with the second half being all about seeing dominance over everyone that has an SCM and some stupid characters which easily fall into putting it on. Like how can you fall for that trap that is so easy to not fall in.

I don't have much to say as I am not really one for animation purposes. But the animation in this show is something that you don't really want to put your time in. Basically what I am saying here is the fact that the animation is nothing special at all compared to other shows that are in this season of shows.

I am a person who doesn't mind watching the full OP/ED as I know what is coming up. But compared to some of the other shows in this season, the OP song just felt flat compared to some of the others. The ED was a little bit better but was the same thing as I didn't really feel like it was a good way to end that episode. Maybe that could have been because I was relieved that the episode was over or something completely different like almost falling asleep.

Before you go and attempt to try and murder me let me explain on this area. Doing a quick little search on the sites shows that there are 20 characters in the show. Now for some shows, this works in their favor but for others, it doesn't. This is one of those shows which is of the former with the fact that there is really no characters which I could fill in the shoes. In fact, if you wanted to me to name my favorite character of the show I couldn't give one.

This also didn't help the fact that they thought that introducing a character in almost every episode (barring the last one) which just add to the character pool that I need to keep track. By the time, the second half of the show started, I gave up on keeping track of characters and where they were and what they were doing. With a limited period, these characters don't get screen time to fully introduce themselves before falling victim to the SCM or being annoying as a cat on your lap.

Overall my experiences for this show was something that I want to forget very easy as I said earlier in this review, the show as a whole is something that could easily be forgettable and not many (if any) will be talking about this show in a years time or even six months time. That is how forgettable this show is to the audience that watched it.

Do I recommend this show to the people that are reading this review? The simple answer to that is no. There are other shows that came out in this season that is worth your time more than this one.

I make it short. The whole idea is pretty good. But unfortunately the story is full of holes. I just couldn't bear to watch it anymore, because too many things was irritating me. Droped this show after 5 episodes.

I dont hate this show. Granted I am a sucker for anime that revolve around "high stakes games"

The way this is made does not suit once a week viewing. It'll intorduce a charter then forget about them for a few episodes and there aren't really enough episodes for the charters to grow on the viewer. The animation is average and sound sup par.

The "plot line" for each charter tends to be:

Watch them carry out questionable activities.

Have a hamfisted monologue on why they did it.

I feel like everthing was wrapped up buy the end of the series even tho tying up charter archs was hamfisted.

If you like this sort of show try it. But if you haven't watched danganronpa, baccano! Or marai nikki or similar (shows that this reminds me of) Id watch them first.

first of all I loved the plot and the idea of the SCM I really loved the art that you got after the break of the episode as it had one side the character was okay and the other side of the screen they were tied up  and I loved that contrast I really liked the characters, Ryuuou and Shiori as I loved they personalities and their design.