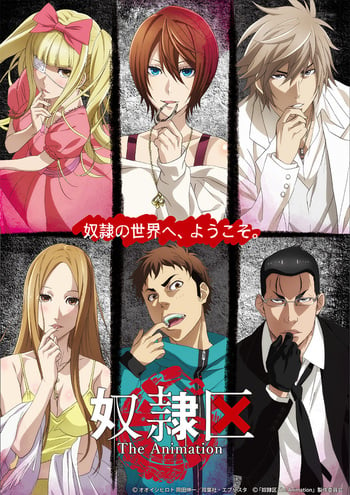 While the setting and the type of high-stakes game that is played may not be the same, the tone of these anime and the fact that all of the characters are grey instead of black or white are very similar.

There's also the fact that both are made for mature audiences and contain material that may not be appealing to some.

Both series involve taking normal people and through the use of unique super-powered items get them involved in an extremely bizzare, hi-stakes competition.

Ayanokouji Kiyotaka has just enrolled at Tokyo Koudo Ikusei Senior High School, where it's said that 100% of students go on to college or find employment. But he ends up in Class 1-D, which is full of all the school's problem children. What's more, every month, the school awards students points with a cash value of 100,000 yen, and the classes employ a laissez-faire policy in which talking, sleeping, and even sabotage are permitted during class. But among all the students who lead such self-indulgent lives, there is one who disagrees with it all and chooses to remain solitary, avoiding contact with others: the beautiful Horikita Suzune. She has figured out that, even though the school gives students huge amounts of money, it also offers many means of "assistance for students with no money." One month later, Ayanokouji, Horikita, and the students of Class D learn the truth of the system in place within their school...

No need an explanation. Both are heavily centered on full of mind games, gambling and insanity. Psychological and sometimes sadistic.

On the surface, Nana Chigusa appears to be a typical honor student, loved by the student council and her peers, and surrounded by admirers and friends. But deep down, even good girls need a way to blow off a little steam and de-stress, and for Nana, that means secretive, intense S&M sessions with Kaoru, a well-known pervert and her childhood friend. What experiences and pleasures await this unlikely pair?

Tatsuhiko Kido, a young man who moves from the countryside to Tokyo to attend a vocational school in the spring. He discovers a tiny hole in a wall of his new room, and although he looks in from time to time, he sees nothing at first. However, one day, he spies a girl.