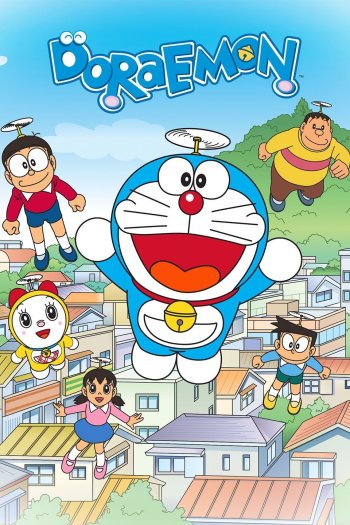 Already one of the most recognized comic and cartoon characters on the globe for 45 years, Doraemon finally made his animated debut in the United States in the summer of 2014, in an edited 26-episode dub produced by Bang Zoom! Entertainment and licensed by Viz.  The dub comprised episodes of the current (2005-present) Doraemon TV anime, which is the third one to be produced (the first one, in 1973, flopped miserably, and the second, which lasted 26 years from 1979-05, became a worldwide hit).  And despite the controversy among many anime fans over the localization process for the English dub - namely the changing of the setting from Japan to the U.S., on-screen edits to change Japanese cultural mainstays to American ones, name changes, etc. - the dub is still a very enjoyable watch.

STORY: The basic story is the same as in previous anime versions - Doraemon, a "gadget cat" robot from the 22nd century, travels back in time and moves in with grade-schooler Noby Nobi (original name: Nobita), a lazy "born loser" who makes Charlie Brown look like Superman, to get Noby's life on track so that his descendants won't have to live in poverty.  That's it in terms of overarching plot points; this is an episodic series, with a typical half-hour episode containing two separate stories, and the stories all follow the same general formula: Noby has a problem and begs Doraemon for a gadget to help him solve it; Doraemon (often reluctantly) obliges; Noby misuses said gadget and creates chaos for himself and/or others; Doraemon needs to step in and fix the problem, with the resolution often making things worse.  The setup is a lot like the early manga chapters and anime episodes of "Urusei Yatsura" - just replace "Doraemon" with "Lum" and "Noby" with "Ataru." Formulaic though it is, the episodes are still loads of fun to watch and offer mile-a-minute laughs.

ANIMATION: The series was deliberately made in a retro style, so despite occasional appearances of modern gadgets and references to the Internet and other modern conveniences in the English dub, it has a more "organic" and "hand-drawn" look than other 21st-century anime.  The character designs were updated when the series was rebooted in 2005, and the updated designs are an improvement over the 1979 series', especially in terms of faithfulness to the manga.  The animation is clean and crisp, and character designs and art styles are pretty uniform across the series, resulting in no jarring changes in animation from one episode to another.  The backgrounds are pale and pastel-ish and look a bit washed-out, however.

SOUND: What I've heard of the original Japanese version is excellent, which should go without saying.  However, the voice acting in the dub is also excellent, and has to be one of the best dubs I've heard of a kids' show.  The dub voice actors all fit their characters quite well.  Mona Marshall's Doraemon is spot-on, and Johnny Yong Bosch's Noby emphasizes the character's "goofball" qualities, creating an extra layer that wasn't present in the Japanese.  Other personal favorites are Kaiji Tang as Big G (Gian), Brian Beacock as Sneech (Suneo), Mari Devon as Noby's mom Tammy (Tamako, voiced in the Japanese by Kotono Mitsuishi of "Sailor Moon" fame), and, though she isn't in many episodes, Dorothy Fahn as Sneech's mom.  As far as music goes, the Japanese is superior; the U.S. version has no theme songs, just an opening narration from Doraemon explaining the premise of the series and an instrumental closing, and the U.S. music is just standard cartoon music, nothing to write home about.  The musical score reportedly was replaced at TV Asahi's insistence, which is also the reason why the chance of getting a bilingual DVD release is, unfortunately, practically zero.

CHARACTERS: No real character development or multi-faceted personalities here, but the characters all have their own quirks and fill their individual niches very well.  Doraemon tries his best to keep Noby on track but has a couple of weaknesses of his own, notably his love of dorayaki (called "yummy buns" in the dub), for which he will literally do ANYTHING, and his fear of mice, both of which are exploited by Noby.  Noby isn't the brightest bulb in the box and redefines the word "lazy," but he's a good kid with a kind heart, and it's hard not to feel sorry for him even when he winds up in messes of his own making.  The gentle, kind Sue (Shizuka-chan, voiced in the dub by Cassandra Lee Morris) is Noby's closest friend besides Doraemon and also his love interest, and has a few quirks of her own, namely the fact that she sucks at playing the violin and is totally clueless about how bad she is.  Big G and Sneech can best be describes as "frenemies" to Noby - when they're not teasing and torturing Noby and taking advantage of his naivete, they get along pretty well with him.  Big G's singing and cooking abilities are as bad as Sue's violin playing, but like Sue, he's clueless about his own lack of talent, and anyone who tries to convince him otherwise is in for a beatdown.  Of the supporting characters, my favorite is Noby's mother, who is a good mother and truly loves her son, but also has a short fuse when it comes to his laziness and bad grades (and she's a hoot to watch once Noby presses her berserk button).  The rest of the supporting cast includes Noby's father (Tony Oliver), class brainiac Ace Goody (Dekisugi, voiced by Spike "Shinji Ikari" Spencer), Doraemon's kid sister Dorami (Wendee Lee), Big G's kid sister Little G (Jaiko, voiced by Minae Noji), and Soby (Sewashi-kun, voiced by Max Mittelman), Noby's great-great-grandson from the future and Doraemon's former owner.

Now a few words about the "Americanization" of the series.  As I mentioned earlier, the setting of the series is changed in the dub from Japan to the U.S., and there are some other on-screen edits, including chopsticks to forks, Japanese currency to U.S. bills, a doll to a journal (reportedly done to make the character of Shizuka/Sue less "girly" for U.S. viewers), and in one episode, a first-aid kit to a pizza (it sounds odd but it actually makes sense once you watch).  I can certainly understand why fans of the original version would be concerned about this, but in the end they don't detract from my enjoyment of the show.  Most if not all of the edits were commissioned by TV Asahi, not Viz or Bang Zoom!.  What we get is an introduction to Doraemon on U.S. terms, one to which kid viewers (which is, let's be honest, the intended audience for this show) can easily relate.  Even being a kid's show, there was no way Doraemon could have aired uncut on U.S. TV, because broadcast standards between the two countries are different.  It's not right or wrong, it just IS.  And quite honestly, I'm surprised about some of the things that were left in... dorayaki referred to by their proper Japanese name in one episode; real guns; implied nudity (albeit with "steam" effects to cover it up).  There's even a very small taste of the ecchi humor involving Shizuka/Sue for which the original show is quite well known - there's a scene in which her skirt is blown up by the wind, and that's left in the dub although a loud, gross burp from Sue's mouth was added to distract from that.  And there are certain Japanese elements that couldn't be changed even if they tried to - the structure of Japanese houses; Noby sleeping on the floor instead of in a Western-style bed; his dad's house kimono.  U.S. Doraemon is a different animal from Japanese Doraemon and should be judged as such.  Anyone who insists on badmouthing the dub without seeing it really should watch it first; it may surprise them.

9/10 overall for both the English dub and Japanese original.  In either language, it's a fun show, and the dub is not the total bowdlerization it's been made out to be.  Please give it a chance before you bash it.