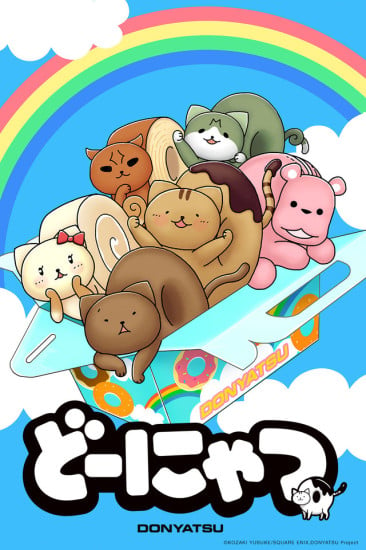 So like the manga, it has various funny antics between the characters and those around them. Unlike the manga it does not have a real storyline, though some of the situations are from or based on the manga. I just wish that it was more plot driven like the manga. I had some laughs during these short stories and overall it was something fun to watch.

I didn't really want my first review on this site to be for this show but oh well. Here goes.

Look, I'll admit it. I'm still not sure if I like the manga series of this or not. I read multiple volumes of it and never came up with the answer. But what kept me reading even while I was ambivalent towards it was how strong the dichotomy was between the cuteness of Donyatsu and friends and the starkness of the world that surrounded them. The cover of the first volume with a cute donut cat in front and a skeleton in the background perfectly illustrates this and is what convinced me to try it. What made me turn the next page was to find out what happened to this world. Not even answers, as I'm convinced the animal baked goods (and thus the readers) will never receive a real answer. What you want are the crumbs left over to build an idea. That. That got me.

None of that was to be seen in these episodes. For a minute and a half (and how long that seemed at times), we get the animals doing "cute" and "funny" things with nothing about the wider world around them. I'll admit, the humor fell a bit flat for me but there were a few that got a chuckle.

When Robosaki appeared only once and did absolutely nothing...that was the final straw for me. As he was my favorite character, I'll admit I might be a bit biased there. In fact most of the characters are short changed here. I realize that with the time limit there is not much you can do but I connected to the characters by how much I remembered them from the manga. Some didn't even really seem to be the same character except that they looked the same. If you like cute things, you might want to give this a try. If you want something actually concerning Donyatsu and his group, I don't think this is it.

Also, though I'm not one to pay much attention to animation quality, the movement of their heads and other elements of this seemed really odd to me. It got to the point where I was hoping they wouldn't move their heads around much during an episode.