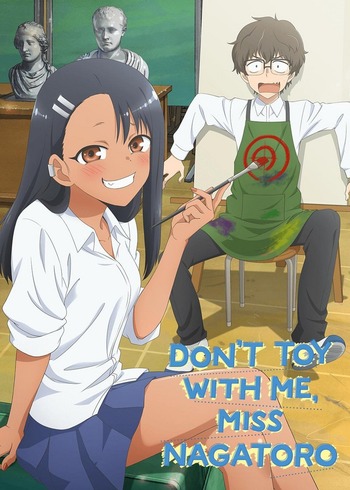 Senpai is a nerdy high schooler whose manga work is discovered by some loud girls in the library. They all tease him, but one among them, Nagatoro, takes it further than the others.

You're All Red, Senpai / Senpai, You Could Be a Little More...

That Might Actually Be Fun, Senpai♥ / Let's Play Rock-Paper-Scissors, Senpai!!

Senpai's Such a Closet Perv!! / There's No Way Creepy Senpai Could Go on a Proper Date!!

You Seem Pretty Stiff, Senpai / I'll Do It For You, Senpai!!

What Do You Think, Senpai? / You Could Be More Honest, Senpai ♥

Has Spring Come Even for You, the Unpopular Loner Louse Senpai? / Did You Hear Her Talk About Love, Senpai?

Anime-Planet users recommend these anime for fans of Don't Toy With Me, Miss Nagatoro. All available to watch right here, right now!

both animes are about the girl teasing the boy. But nagatoro is 13+ whiles takagi is 7+. And in nagatoro the girl is meaner and the boy is alot more pathetic. but still both are funny

The characters are alike along with the plot. they're super good comedy animes if you need a good laugh!

If you like one, you'll like the other, both were a barrel of laughs with Nagatoro being a bit more on the romantic side.