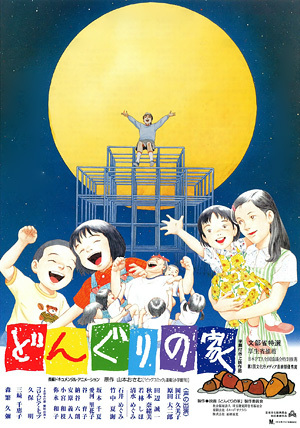 There are seven young brothers and sisters who grow up peacefully supported by the love and care of their parents. As a token of gratitude, the children present a trip to the couple on their wedding anniversary. This heartfelt deed, however, causes a terrible misfortune as their parents are killed while on their travels. Though it is certainly a shocking tragedy to the youngsters, they cannot be left in sorrow for a long time. Rather they have to make efforts to stand on their own feet in a body without depending on anybody else. So, their strenuous and daring living starts anew helping one another with brotherly affection, and their sincere attitude and lively activities gradually win admiration and encouragement from people of the community.

There is nothing stranger than life, and modern day Japan quietly watches over the comings and goings of thirteen completely unrelated lives and their stories. From a boxer fighting the scars of his childhood, to a father vying for the attention of his disinterested son, all experience the complex eccentricities and intricacies of relationships. Do memories and experiences really make us a stronger person for the bigger picture, or are most people happy just to sit back and let life pass them by?

Kaze no You ni

Sanpei is a boy beekeeper and the sole survivor of an accident that killed his entire family. Sanpei meets Chiyo, a girl who gets stung by a bee, and starts a new life in her village. Eventually, Sanpei cultivates the land that the villagers had abandoned, and then disappears. In the land now filled with flowers, Chiyo waits, believing Sanpei will return.