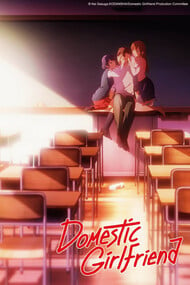 For an anime about a boy who wants to become a novelist, Domestic Girlfriend committed a few sins on character development. Beware, total spoilers ahead. The premise is interesting: a teenager suffers from unrequited love for his teacher, tries to move on by having casual sex with a girl his age, only to find out that both girls are sibling and that they are going to live with him from now on. It creates a good tension. The fact that the MC's love is living with him makes it harder for him to move on, as now he shares intimacy with the woman; the same goes for the girl he had sex with, making his situation even more confusing and uncomfortable. As if that wasn't complicated enough, she is developing feelings towards him. This set-up created an incredible environment for character development. But instead, the author just throws it out the window by turning the plot into a mess by the middle of the season. Besides the premise, every story should have a clear goal for the MC. In this case, the goal is: he wants to date his teacher. So the ending of the anime should be about whether or not he achieved that. During the course of the story, he would have to go through a process of change, either of heart or character. That is how stories are made, and seeing how characters change while they struggle to achieve their objectives is what make stories interesting. Instead, in this anime the MC forces his way through his teacher's heart and achieves his goal by the end of episode 8. Leaving aside the fact that the MC went through no change, the result is that the last 4 episodes are boring, as the show tries hard to create some drama to compensate for a lack of objective. Now, there are plenty of stories presenting characters that don't go through change, but they normally end badly for the MC. In this case, without change, the character would have ruined his and his lover's life. This is even acknowledged by Hina (the teacher) who says to Natsuo (MC) "are you sure you want to follow this path? To do so would mean committing social suicide, for both of us. Could you do that?". But instead, there are no consequences to their romance (other then they having to be separated, at least for a while). After they have been found out, the teacher transfers to another school, leaving Natsuo and her family behind without word. No charges, no scandal, no reproach – i.e. no social suicide. In the end, Natsuo suffered a lot. As a consequence, he wrote a prize-winning novel. And he'll be banging the poor younger sister. All's well that ends well. Because Hina left him, Natsuo was able to write the prize-winning novel. The last episode is not about how his world crumbled into pieces after a sordid affair, but about how the destruction of his world made him rise from the ashes as the phoenix, turning him into an artist. There's even the cheesy quote "Art is born of sadness and suffering". No matter how the author of the anime tries to mask this, the story shifted it's focus. If you break down the last episode into one sentence, it would be something like this: "and to achieve his goal of becoming a great novelist, Natsuo would have to suffer the loss of his first love". You see, even in the review it gets confusing, because that ending would only make sense if the initial goal was "Natsuo wants to become a novelist". One might argue that Natsuo's goal was always to be a novelist, but that's not true. It is clear from the beginning that what he desires most is to be with Hina. In the first episodes, he is not portrayed as a bookworm/writer. It hints that he likes to write, but that's more a character trait than the objective of the story. Also, he only joins the literary club by episode 5. If he wanted so bad to be a novelist, if he loved so much reading/writing, why wasn't he in the club before? Regardless, even if this was his childhood dream, it was not the goal of this story. There are many, many paths this anime could have followed that would have made it good. Unfortunately, it seems the author of the series has not been through enough "sadness and suffering", otherwise this might have been a prize-winning piece of art. This anime had potential, but it was confused about it's own structure. The characters could have been interesting, but they lack development and growth. The plot could have been good, but it lacks consistency. In the end, although the first 4 episodes were engaging, this anime was a train wreck. It turned out to be boring and confusing, and left a bitter taste after it was finished.

Ok, I've wanted to watch this Anime for a long time and since it's the penultimate episode why not do a clear review. To put it bluntly, Im disappointed with this Anime. It seems very rushed and skips many pages of the original manga. The story is 'good' in it's own way like visually and well-built characters. But the company seemed to think it was a good idea to rush through chapters of the Manga. Now, I'm not here to blame the company since they're doing their job but the ending is just not satisfying. I'm not here to be one of those cliche reviewers but you will likely get bored with the annoying MC and the female MC. Spoliers The MC is so annoying and selfish not to say Rui isn't but he is just stuck with this philosophy of liking his teacher then he goes and get another girl to supposing forget about the teacher. Then we realise that the girl he 'boom boom' with was the sister of the teacher I mean what are the chances? Rui(the girl the MC did it with) now tells him not to talk about it which then at the end I guess she deserves because he then starts liking the teacher even more. This anime is like the same tone of Schooldays sprinked with less eroge and death. You could watch it it's enjoyable but you will not be satisfied.

Honestly, this season is feeling like things are just getting started. If there is no other season (which I'm assuming there will be), then I think this wouldn't be much of a watch. But assuming it is, I think this is worth watching when season 2 is out or around the corner.  In a nutshell, the main charater's dad gets mairred to the mom of some girl who he slept with less than 24 hours of finding out the 2 are together and she is the mom of a teacher he wants to be with. As you might guess, anime logic happens and he does end up getting in a relationship with the teacher and the girl. From there out, it becomes a fantastic slow motion trainwreck until the last episode.  There is a number of things I and many others find at fault with this. Like the picture that was taken during the last ep, it physically would've been impossible to get it. Like the picture was taken by someone for a yearbook, they didn't know about taking the picture until going through all of them, and yet it's zoomed right into spoiler. And with the hight and whatever, the person had to be in a crane or on top of a tree to get the picture. The subject was multiple levels up. Another problem many found is the show skips over a lot of important detail that is in the manga.  One of my personal problems is the show has too much backstory on people who doesn't matter. Like there is an entire epsoide or 2 on back story on people who doesn't matter in this season (obviously, this might pay off later). Any case, I would say watch the first 2 ep. If you don't care for it by then. Then I highly doubt that will change. 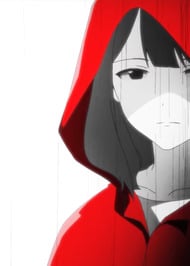 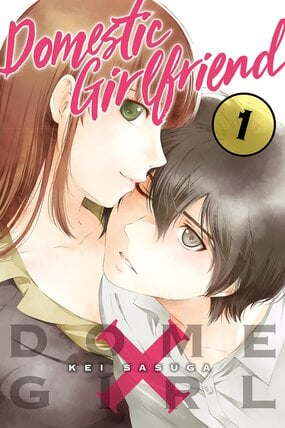