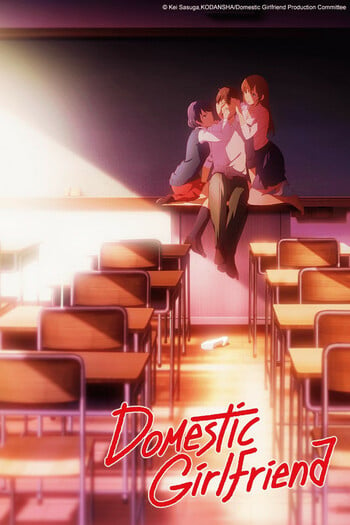 Hina puts her plan to move out into motion. Neither Rui nor Natsuo wants her to leave, albeit for different reasons. Will their home feel the same without Hina in it?

In order to increase birth rates, Japan implements a capability calculation that assigns partners to young people when they turn 16. Those who deviate from their assigned partners are severely punished. Yukari Nejima has been in love with Misaki Tazaki since grade school, and finally confesses to her on his 16th birthday, only to find out he has been assigned...

>coming from domekano to koi to usoEXPECT more time into actual rivalry in love from the love interests, while the main character is really equally as blank. the characters are more likeable, while still providing an interesting character drama.DO NOT EXPECT ecchi. it does has a bit of ecchi, but that's about it. coming from flat out sex scenes and delicious forbidden love, you come to a vanilla story.>coming from koi to uso to domekanoEXPECT a bit more of a heavier story, koi to uso will feel way lighter even though domekano has absurd ecchi slapstick moments, it still feels quite heavyDO NOT EXPECT, well, a more vanilla story i guess? again, this one has forbidden love.

Koi to uso and domestic na kanojo both revolve around the theme of unrequited love, I would recommend people currently enjoying this winter anime to go ahead and check out Koi to uso, or known as Love and Lies.

Yuzuko Aihara, a high school girl whose main interests are fashion, friends and having fun, is about to get a reality check. Due to her mom’s remarriage, Yuzu has transferred to a new, all-girls school that is extremely strict. Her real education is about to begin. From Day One, happy-go-lucky Yuzu makes enemies, namely the beautiful yet stern Student...

Citrus and Domestic Girlfriend are pretty much the same anime with one key difference. First the similarities:

Now the key differences with Citrus:

Naoya is a first-year high school student. After he confesses to Saki — the girl he's liked for a long time — they decide to start dating, Naoya's life is full of bliss. However, one day a beautiful young woman named Nagisa also confesses to Naoya. Naoya and Nagisa immediately get along, and he tells Nagisa that he already has a girlfriend. She...