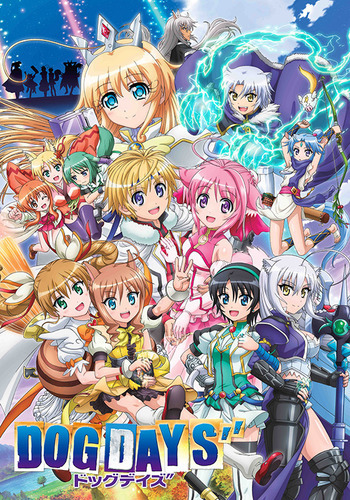 After watching the first and second seasons of Dog Days I had high hopes for this season. Overall, it was pretty good, but it didn't really top the first season. I understand that the producers and writers are trying to leave space at the end for more seasons, but I felt like some conflict was left unfinished or resolved in an awkard way.

The story is underdeveloped and tries to make up for it with all the moe fluffiness it can muster, and I feel like that did the characters no justice. The concept, talking animal-humans in a different world who fight and are still friends, is good! It's overdone, but it is still able to be built upon and unfortunately, Dog Days didn't really make it far enough in the runnings. Unlike the first two seasons, the third season tried to make the cuteness dissapate a little and spice up the plot with the introduction of demons, but it just wasn't cutting it, the conrast between the cuteness of the first two seasons and the demons in the third isn't fitting.

The characters were generally the same, all of the original characters have grown up a little but they still look the same and they have all the same abilities and everything, but some of the new characters I actually really liked. Couvert, for example, was cutesy and had spunk. Even though Millhiore and Leonmitchelli don't really take her seriously at the beginning, they eventually do see her as a friend and opponent. Other minor characters that were introduced, however, didn't really do it for me. Adélaïde, for example, was the legendary hero that defeated the demon king. Why haven't we heard about her before? Where did she come from? Who is she? How did she defeat the demon king? Nope, no, we don't really get to understand any of that clearly because all that conflict was ended in just 4 episodes.

Overall, this anime is cutesy and has quite a bit of moe, but that doesn't mean it won't be enjoyed by people other than the intended audience. If you can deal with moe, and comically childish plotline then you'll like this. Honestly, I thought it was decent and I would recommend it, but only to those I was positivie would truly enjoy it. I give it a 7.5 overall.