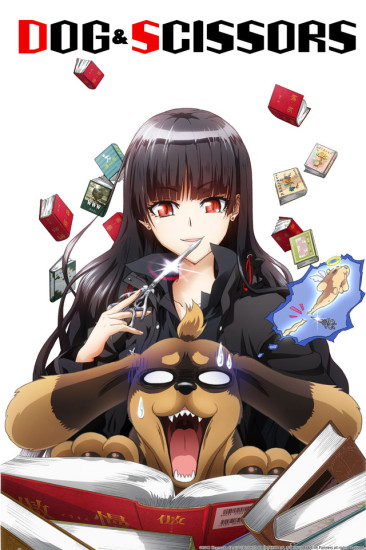 Obviously, I'm going to be the oddball reviewer giving a quick once over of the other reviews.

With these animes, you normally don't get a whole lot of in-depth stories or lots of character build-up. So for those who must have these two things, they won't appreciate this anime. HOWEVER, those who will enjoy an anime that doesn't require you to remember previous episodes in detail and just have a laugh, I would image you would enjoy this anime as thoroughly as I have.

i don't think the story it self was that good, but I loved the characters, super funny and for a bit there I thought there was going to be some romance between a dog and a girl, which would have been weird 😂😂

but overall all it was great wish the plot was a bit better, but hey still good 😍😍

this anime is super under rated, it's a unique comedy that has a supernatural ish feel to the plot and even includes battles. the lead voice actors did a great job. For seasoned anime watchers its predictable plot let's the humor shine (shiney ;) and the characters personalities are very well portrayed. I encourage to watch the first half of the series to get to know the characters and joke style and not to judge on the first episode. personality i think it's great :) and shiney.

Oh Gonzo, I have such a love-dislike relationship with you.

On one hand studio Gonzo has given me some of my favorite anime (Last Exile, Gankutsuou) and on the other they have given me a lot of "meh". Dog & Scissors falls into the "meh" category... with a side of disappointment....and crap.

I went into Dog & Scissors without any expectations or previous knowledge. I saw it listed on Crunchroll and decided to check it out. The animation looked nice, the description sounded interesting, and I’m always a sucker for those "oddball" anime that get overlooked by the general audience. The show started off promisingly enough with our bookworm main character finding himself the unfortunate casualty of a robbery gone violent. Dead. Then through a miracle he finds himself in the body of a dog who promptly gets adopted by his favorite author. Things seem to be looking up for our main character... but not so fast! His favorite author turns out to be a sadist who loves slicing and dicing on our poor puppy hero! Will he ever get back to his body? Will he ever see resolution to his murder? Will he survive to the end of the series? Will this show do ANYTHING interesting at all? *sigh* Well, here are my thoughts:

At first I was intrigued by the show and even though it stumbled a bit I told myself I would stick it out for the long haul. I mean, it's only 12 episodes right? How tough could that be?

So before you leap to conclusions based on my score, no this show is not a steaming pile o' fecal matter. It is however really bad. It's one of those anime that you can see promise in but it really fails in pretty much every area. I will try and address as much as I can but I also don't want to beat a dead horse.

Story- While the premise for the show had me interested and tickled that part of my anime brain I was really disappointed with how they failed to use what they had set up. You have the main character who now finds himself in the body of a dog living with his favorite author who turns out to be a sadist. This could get interesting but the show has a serious case of ADHD. What starts as a mystery about the main character's death quickly turns into a "weirdo of the week" kind of formula before quickly ditching that and singing contentedly to itself while circling the drain for the last few episodes. Nothing ever gets explained and the show will present a problem only to deal with it for a bit before spotting something shiny (YES! It is as you say Maxi-sama!)<--(I'll explain that later) and promptly forgetting about what it was doing and runs off into the next episode. The show has characters (including the author herself) armed with various weapons who randomly get into fights but does the show ever explain why there are people running around with these weapons? Of course not. There just are and you have to accept that. I know this is one of those "absurd" anime that just throws stuff at you without much of an explanation but it gets pretty stupid. Like how the show tries to create a sort of "romance" between the two main leads. Really? I know anime goes to some weird places but you have a guy who gets turned into a dog living with his favorite author who is cruel to him and they try and do the whole "tsundere" thing and show that she actually likes him. She doesn't even know him but suddenly develops feelings for him because of REASONS. Did I mention she can read his thoughts? How bout that!?!?

Animation- While the show is a mess at least it looks decent. There are a few action scenes and a lot of effects when shenanigans go down which are animated well enough. The characters are drawn well and have that usual "pretty anime girl" look to them. The opening and ending are colorful and catch the eye but overall Dog & Scissors looks just like any other comedy drama anime.

Sound- Unless there was some epic orchestral piece or something by Yoko Kanno that I missed the soundtrack was completely forgettable. I can't say anything stuck with me and even the opening and ending songs, while catchy enough, will be forgotten as soon as the next anime comes along. The voice acting (Japanese) is done well with standouts by Shizuka Itou and Marina Inoue who are able to change their voices up quite well for their characters and the various moods they find themselves in.

Character- Oh boy. Now I've seen pleeeenty of bad or mediocre anime saved by good characters and even though there were a few moments that made me smile the characters in Dog & Scissors are about as interesting as a ham sandwich. Now I don't have anything against ham sandwiches but have you tried eating a ham sandwich for every meal for a whole month? Now I know the length of time to finish this series is nowhere near as long as a month but watching these characters felt like opening up my lunchbox, taking out my sandwich, slowly peeling back the bread hoping to find something interesting, and being disappointed to find the same old thing, "yup, ham again." I kept expecting more out of these characters. I believed they had it in them! Sadly I was let down with a cast of one-note characters who, while charming at first, quickly wore out their welcome. You have the main character who loves books and nothing else. He's like the typical otaku character but with books (only interested in "print" girls"). He finds himself in this new situation but doesn't seem to care because he can still read and that's all that matters to him. Well, aside from his new owner finishing the last book in his favorite series. He also teases her a lot because of her flat chest and quickly gets punished by his master (you'd think he'd learn). Then we have his owner who is a sadist.....she also fights with scissors (thus the name). She lives a life away from the public and spends her time writing. I'm really having a hard time thinking of more to say here.....she's not that interesting and is simply there to fill the "love interest" or "tsundere" role. She also cuts on the main character a lot when she is mad......which is a lot. There is also her editor who is a total masochist and loves to be beat up by her. Honestly I was the most interested in her character since she reminded me of the main character from MM!! but she is also pretty boring. There are various characters that pop up in their adventures (a word I use sarcastically) but quickly wear out their welcome. There is the rival author who is also a pop star who shows up randomly from time to time and announces to the world that she is shining. She is followed by her "men in black" who always follow up every one of her announcements with, "Yes! It is as you say Maxi-sama!"......ESPECIALLY when she says she's "shining". Ugh. Then there is the old classmate of our main character who is the most timid, cowardly, unconfident girl you will ever meet. She mostly spends her time apologizing and threatening to kill herself for bothering the rest of the cast. These characters, as well as a few others, get their time in the spotlight as a "villain" for an episode......because of reasons. (Ok, so this is my other big complaint with the characters and a big complaint with the show that goes along with how I said it had ADHD.) The show will just come up with the most bizarre reasons why two or more of the characters should fight and then you get to watch them run around and shout at each other before quickly ending and now everyone is friends because of REASONS. There is no weight to any of the fights even though I'm pretty sure in many situations they wish bodily harm upon the main character and his owner.

Humor- I thought I would mention the show's humor because it goes along with my comments on the character in the show. Just like the start of the show the humor also showed promise but quickly degraded into beating you over the head with the same content over and over. Hey guess what? The main character did something to anger his owner. Oh no! She's gonna get him! Ow! He got cut by her scissors! RINSE. REPEAT. The show will often do that thing where the main character will get himself into a situation where the camera promptly cuts to outside the building (or an aerial shot) and you hear him howling or yelling in pain as it eventually trails off into the distance. Get used to hearing him do that a lot. You can pretty much have a drinking game watching this show. Assign each one of your friends a joke and every time they repeat it take a drink.

Now I know I didn't really have anything good to say about this show, other than it is technically competent, but really that's all it managed to get right. Gonzo started with an interesting premise and the show showed promise from time to time but it was ultimately let down by very poor writing and characters who never got fleshed out into people you would care about. Maybe if the show would have had a bit more direction it could have been better but it kept changing its focus every 2 minutes. Often times I can forgive a show like this for not doing much plot-wise if it does something with its characters but the show gets a fail there as well. You are never given an explanation for pretty much anything that happens and character motives are all over the place. The addition of a "romance" between the two leads is so forced and comes out of nowhere. The show is really just a big mess. You'd be better off spending your time elsewhere.

The show was not very good, to be perfectly honest. However, I was completely entertained the whole time. That's more than good enough for me. Give it a whirl if you wish. You probably won't care when it ends, but I am willing to bet that you will be entertained.