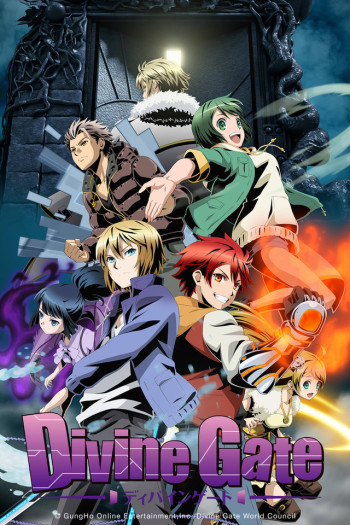 Divine Gate is based on an app game by GungHo, which boasts about having over 1000 characters. This leads to the problem of which characters to animate, since the favorites would change from player to player. So, instead of choosing a handful and giving them all the air time, Studio Pierrot chose a couple dozen and made a mess.

Story: The first half of the anime actually had a comprehensible storyline. Got to open that Divine Gate! And then, a lot of questions pop up without a whole lot of answers. But when the game the anime derived from a connect-four style puzzle game, the story wasn't that strong to begin with. Still, the storyline is way better than some app-game anime.... (vampire Holmes)

Animation: The animation is colored in a way that reminds me a dystopia. I think it's the thicker lines and stark color contrasts. The movement and elemental attacks are decently animates, as well. There are some times were the fluidity just isn't there, but nothing that shouts "bad animators".

sound: I didn't watch the OP or ED, since I marathoned this anime, but I do know the OST seemed to fit well with animation.

Characters: Here's the major hang up in this anime. There are only 3 characters with any sort of backstory, and it's jumbled at best. The rest of the characters all have varying levels of importance, and there are so many of them trying to get air time that it just becomes character soup. There's the Knights, the students, some cross-world plot points, some Norse gods without names... And Shakespeare is a little girl? But when your character base is over 1000, and everyone has a different favorite starting Pokemon...er... Person, it gets a little crowded.

Overall: Maybe play the game for a bit, get to know the characters, then watch the anime. Maybe it will make more sense that way.

Divine Gate is another game to anime adaptation ... something which rarely ever succeeds as a worthwhile production. Indeed, Divine Gate is yet another industry failure.

Where the first few episodes were strong and lead you to believe that, for once, they were on the ball, instead, as the anime progressed the plot started to unravel at the seams until it completely fell apart into one massive jumbled mess. The pacing was simply horrendous, while the plot became confusing as hell! In addition to this, the characters were either annoying in the extreme ... or remarkably cliché. And, with the cliffhanger ending, I can only hope that the production company doesn't waste even more money by pouring it into this really crappy series (my opinion).

The animation, on the other hand, was actually quite good and was very appealing to look at. And perhaps the most important part of the entire series was the OST, particularly the thoroughly addictive OP, which was, frankly, one of the best I've heard in the past several seasons, and the only thing about this series worth praise.

Overall, I would advise everyone to pass on Divine Gate. Other than the animation and OST it has nothing else going for it. Don't waste your time on this. Just don't. -_-' 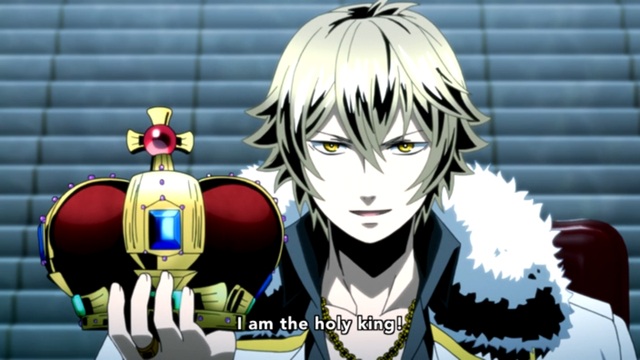 Spoiler free! I really thought I was going to like this anime when it started. The premise seemed interesting and I really liked some of the characters. I also liked the animation style, it's different from a lot of animes. And the opening song is pretty good too, probably my favorite thing I'm going to take away from this anime. The story just seemed to meander though, without ever really explaining anything. And not in the mysterious good kind of way, where you can't wait to figure out what's going on, but more in the poorly thought out kind of way. The tag says it was based on a video game, which I have never played, so maybe that would have made everything a little more interesting? As it is, I dropped it at episode 7. I might finish it someday, if I see some good things about it after all the episodes were out, but it was getting to be a chore to watch every week.

This anime.... Well it was good at the beginning but then as it progressed it slowly started falling apart and stopped making sense to me. The animation is AMAZING. And at some points you can see where they used CG instead of the animation to help things flow more smoothly, which I will admit it does.

The story is kinda jumpy. It'll go back and forth to the past and present and suffers from flashback-syndrome, or whatever its called. Where you see a flashback into the past for no particular reason over something that may or may not be relavent at the time. For me personally its a pain in the butt.

The sound is pretty good and I'm in love with the OP song if only becuz of the way they make the voice sound techno. Another thing that helped me to finish this anime was that Akane's voice is the same as Natsu from Fairy Tail and they both used fire abilities/magic so I could relate to that. Personality was a little bit the same too.

The characters were kind of all over the place. Sometimes youd see the side characters like the knights of round, and then theyd be there for no reason. Also why were the knights of the round table even named that? It has nothing to do with the story, none of their "code names" have anything to do with the Divine Gate and using different names for say Oz and Loki have no point. Oz really didnt fit his name although I will say Loki did.
One of my main issues was that Aoto was literally confusing. They never make it clear over what hes truely struggling with and the flashbacks he has dont help. It isnt until a little over halfway through the anime that you learn the truth and thats when he, himself points it out. In whichcase if your not paying attention you'd miss it.
Also, the Council. What are they? Why are they, Who are they? All you see is cloaks and hear mixed voices. Are they good? Are they bad? We'll never know!

Overall I'd give this anime a 7/10 if only becuase the animation was enough to push it past 5/10 for me. I was hyped by this anime and let down quite a bit. If your looking for confusing and almost puzzling this is your anime. If not then you may want to pass it by.

I had hoped this anime would be good, but it fell short, really short. Although a bit complex for a 12 episode anime, the beginning caught my interest. I really liked the main character. There were plenty of things that didn't make much sense but I figured they would late. Long story short- I can say the same about this anime as I've said about a hundered other short animes, don't try to put a complex setting with complex characters and a complex story into a tiny anime!!!! It doesn't work. It isn't going to work.

Honestly, I can't say I'm surprised. I didn't notice it before, but it's from Studio Pierrot and honestly, the few decent animes they did put out, they screwed up towards the end of the series or during the second season. The only one I thought was decent all the way through was made back in the late 90's. Normally, I don't mention the studio in my reviews but I felt I should just put that out there.

The main character is decent. The rest of the characters not so much. For one thing, there are too many characters. I don't know why writers insist on putting a bunch of characters in short animes. They can't all be developed well and it's hard to keep up with. The main character does change over time some, but honestly, it's a mess. Toward the end many characters get hurt and honestly I didn't feel much of anything because I barely knew who they were or how strong their relationship to the other characters was. Overall, the story seemed to focus on four characters giving background history, curent feelings, and development which is 3 characters too many for twelve episodes.

The story isn't much better. It's set in a world different from ours, actually, multiple worlds which makes matters worse. To top it off, the explanations for how anything works are breif and not very helpful. Not only that, but I'm pretty sure it's inconsistent too. I haven't gone back through the first few episodes to check everything, but the story told towards the end about the main characters past didn't entirely match the original story. The first time it was told, it seemed as though the brothers had very little contact with each other. During the second telling, it appears as though the brothers had only been seperated for a few months maybe less. In the beginning, it was mentioned the parents never gave the boy warm food and that was why he couldn't eat warm food, but in the second telling, he lived in the house with his brother for most of his past and was treated about the same as his brother during the early years. Of course, the brothers may remember the past a bit differently, but that is a bit too different. The first four or five episodes were decently consistent it seemed, but after that it was a mess. Too many things don't match up. Overall, I don't feel like I understood much after the fourth episode.

As far as animation goes, it wasn't bad. It was average. Nothing about it stood out to be as good or bad. It didn't seem to aid the story in any way, if one even could aid that story. The sound was about the same. I did love the opening song which isn't very common for me, but beyond that, nothing stood out. Again, I don't think there was much it could do to aid the story even if it tried.

Overall I am very dissappointed. I thought I was going to like it, but in the end, I will probably forget about it quickly or remember it only for being one of the confusing choppy messy animes. It's just no good.