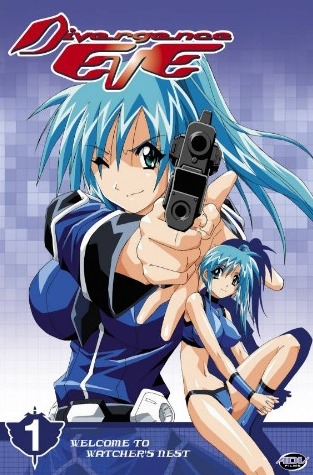 This show is perfect for fans of sci-fi and mystery with a touch of gore and ecchi.  Anyone fascinated with the theories of space and different dimensions is sure to find enjoyment in watching this show.  Those who enjoy a bit of mystery will enjoy watching the story unfold in a somewhat confusing manner although in the end the story will all fit nicely together.  There is some ecchi, or fan service, throughout the show but it is never really overpowering.  The gore factor is similar though not as prevalent.

The animation was decent, not the best I've seen but not the worst.  My biggest complaint was that while they utilized CGI and traditional animation they weren't able to combine them together all that well.  I do not recall when CGI began to be integrated into some shows but this was either one of the first or done by someone not too skilled, it seemed like an experiment.

I'm a huge fan of sound/music, while the OP and title sequence for each episode were okay the rest of the soundtrack was not very impressive.  Listening to the dubbed version of the show I found that they often tried to mix too many conversations in at once.  Sure it added to the feeling of being in a very busy/active place but it detracted from the main dialog.  It would have been better to either lower the volume of the background dialog or made it mostly unintelligible.  The only other complaint I had was, at least in the beginning of the series, when they had the off-camera voices at a lower volume, often had to turn up the volume to hear what they said.  I didn't notice this later on in the series, they either changed their methods or I just didn't notice it any more.

The characters were okay, they didn't stand out too much.  I think with a longer series they may have been able to flesh them out a little more.

Overall I enjoyed this series because I am a sci-fi/mystery fan but due to the bad marriage of CGI and traditional animation, the lack of a good overall soundtrack, and the only slightly above average characters I was not overly impressed.

This review was pulled off the forums from an old club I used to run, the format is different for that reason but still applies here.

What can you say about this to start off that doesn't touch on the overly obvious? The A-P tag "Boobs in Space" is more than obviously well earned. The gravity defying, Jell-O consistency, uniformly sized, and rather large boobs of every female character other than the token loli (android) made for a challenge to see past. Once I made the effort to look past it's visual "defects" I noticed that this show was a lot more than just a pair, or ten, of breasts bouncing in my face repeatedly. Whether or not the artist did this on purpose or just happened to have a serious Jones for large bouncy boobs I cannot say. I will say this, if one is able to see past the obvious and through the obscure you will find a very interesting show all around.

Here is where the real meat of the show is. The story itself was actually quite good, I found myself drawn to it once I got past the breasts and the very pulp fiction style. I liked the feel of the show's plot because it became almost a challenge to keep track of what was going on, bouncing all over the time line from episode one being "Mission 2" and the last 2 eps of season 1 "Mission 1"/"Mission 3" respectively. Season 2 went even more into the land of odd with it's own time/space travel into alternate possible universes and kept up with a myriad of flash backs from a multitude of characters. Indeed, had it not been for the self satisfying and unrealistic breasts everywhere this show would have had a much higher overall score on story/plot alone.

The characters all seemed slightly standard from my view point, having seen a large amount of anime already there are few archetypes I haven't already seen. The insane genius villain, the loli, the tsunderes, and the bumbling main character with a hidden strength no one else has. Characters progressed at a pretty decent pace, they didn't stagnate too often and even when they did it was followed by a leap in growth.

I wasn't overly impressed with the music or the sounds, they were pretty drab and overly used through out the show. Your basic electronica/techno background music with various explosions and gunfire sounds. It wasn't bad though, timed well, fit the mood well, and mostly just did what it was supposed to. I didn't notice them all that much while watching so I can't say it was a failure.

I wasn't sure how I felt about random CGI artwork and regular animation melding but after a while I got used to it and eventually enjoyed the highly detailed mecha and ghouls. They gave a pretty interesting progression in mecha design as well as the show went back and forth through the time line. I also got the feeling that the designer put a lot of thought into what technological advancement might look like for those mechs. When talking about artwork and design we have to again mention that the boobs were a lot over the top and were what you might call the "ultimate fanservice" to breast lovers. Had they been toned down and maybe varied in size/shape they wouldn't have dominated

Hello and welcome to my very first review; which is on the under-rated Divergence Eve.

Well; by looking at the synopis you'd would think that Divergence Eve is just another monsters vs humans set in space genre; however you'd be wrong in thinking that. The viewer isnt given much detail about the Ghoul's except that they come from another universe; and are very powerful and can tear through steel like wet paper.

The story centers around our heroine;Misaki. She joins the military and was selected for training on the "Watcher's nest"(a space facitliy that helps facilitate faster than light travel; and to repel the ghouls) to join an elite squad; called Seraphim. However; she is a klutz; and gets the worst scores in her training. However in one set of tests she suddenly displayes starling good results; but then turns back into her klutz self. you see; Misaki; like her fellow cadets selected to join Seraphim were all offspring of genetically modifed humans; but dont realise it(until later in the series).

Jump back 35 or so years to the watcher's nest. Some scientist thought it would be a great idea; seeing the strength of the ghouls; to try and incorporate that strength into humans; via genetic engineering. Misaki's father was one of those who were genetically altered from conception; and they were part of experiments to see if the engineering had succeeded.

Jump back to the future

What they didnt tell Misaki when she joined was that her father didnt die in an äccident"..he was killed by a ghoul

In the present; another major charachter; Jean-luc le blanc; decides to carry on the experiments with misaki(who carries the same altered gene's her father did)seeing as all the other subjects ended up dead...

Hopefully thats enough to interest you to find out what happens :)

But in conclusion; Divergence eve does have some plot holes; like most anime.

Well; it was produced in 2003. So going by 2003 standards; i can say that its smoothly animated; brightly coloured and well drawn. Nothing Fancy but definetley competently done.

For some reason all of female charachters have very large bust; and there is some partial nudity;(confined to one charachter); but this is kept to a minimum through out the series. This isn't an ecchi series folks.

I watched a dub of the series; and i thought the voice acting was good; and competently done. Definetley Clear enough.

This is divergence eve's weak point.

I felt that the charachters were lacking backround (except for Misaki) and depth a little.

I thorougly enjoyed Divergence eve; It also had a good setup for the sequel. It also has an interesting method of story-telling; with the first episode depicting events later on in the series and then the next 9 episodes explaining what the hell is going on.

Its far from perfect; but is deserves more than the lowly 2 stars it gets.

If your looking for sci-fi with a slight twist; look divergence eve up.