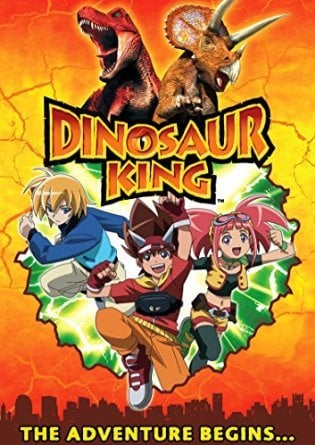 Dinosaur King is somewhat not like Pokemon. Both are very different in their own ways. Dinosaur King is about capturing dinosaur around the world from an examination that people from the future did long ago. Dinosaur is able to use move cards instead of automating knowing the moves. Dinosaur King is good with how everything is related to dinosaurs. How the dinosaur in the real form look a little strange from any anime I have seen so far.

Welcome to Digimon… I mean Dinosaur King. For real though, We have three protagonists… two guys and one girl, who find special cards one day and when they rub the card on a stone, it activates. Does this not sound like the D-readers and cards in Digimon Tamers, especially the two guys and a girl concept? And then we have the bad guys, the Alpha Gang who seem to be a rip off of Team Rocket from Pokemon. During the time that this came out, it feels like most shows were trying to mimic Pokemon and Digimon though I think this might have been the first to put both into the mix.

The characters are pretty annoying, and seem only like spitting images of three main types of Digimon Tamers… the children. We have your standard goggle wearing (or in this case, horn visor that seems to light up for some unknown reason?) leader who is over active and doesn’t know when to stop, Max. The more level headed boy who seems to actually think, Rex. And then we have the whiny little girl, Zoe.

Let’s start with Max… well… He’s stupid. For a guy who is really into Dinosaurs, when he first meets Chomp the Triceratops, he doesn’t seem to have any clue what it eats. If you have ever watched Land Before Time, a Triceratops is also known as a three horn and is pretty much what Sarah is. For those playing the home game, they eat plants. I guess it makes sense that the guy who wears horns on his head all the time and is probably the laughing stock wherever he goes to school because of it would be the owner of a Dinosaur with horns. Still, he treats Chomp like a dog most of the time. He also came up with ‘Dino Slash’ which feels like a rip off of ‘Go Poke ball!’ On the other hand, like all main characters, he cares deeply for the dinosaurs that keep getting abused by the Alpha Gang and wants to help them.

Rex is pretty smart, at least as smart as a character can be in here (That isn’t much by the way…). I’m surprised that he is so grown up since his father is exactly like Doc Taylor, the father of Max. I know characters are not all the same, but if you grow up in the same type of situation, you would at least be similar to the other person. Anyway, his Dino is Ace the Carnotaurus. Ace is kind of a speedy little guy who just does not want to stay put. In fact, basically all through the first part of the series, that was all Rex was dealing with. The problem I have with this is that when they finally figure out why, it’s not Rex finding out, it’s the whinny Zoe who does. It would have been a better way to bring Rex and Ace closer together if he found out himself.

Rex and Max also have the same complex of who is the leader that any Digimon show has. They bicker about what the right way and the wrong way of doing things is, sometimes getting themselves into more problems. There really isn’t a reason for this fighting, it just happens. The show doesn’t even make me want to root for any of them to be the leader to be fair so the whole fight just seems pointless.

Zoe seems to be a bit thrown to the side. She has a Parasaurolophus named Paris and how she got that name feels the same as someone calling a Panda Pan or a Tiger Tig… It’s just the first few letters of the Dino’s species. She normally only uses healing cards and has a rather gentle Dino instead of a fighting dino like the other two. In shows like this, they seem to always throw the women into that area… in Pokemon, Misty was a water Pokemon expert, and only water Pokemon it seems… in Digimon, the women were always getting pushed around or not seen very much (or they are given attitudes like they are always PMS-ing like the girl in Digimon Tamers). She may be considered a main character, but she just feels like support.

Max’s father is a little odd. Somehow, he knows a lot about the stones the kids have right away, thinking that the thoughts of the dinosaurs are trapped within them. He seems to explain the stones like he knows exactly what they are used for and what can be done with them in the second half of the first episode. I see him somewhat like a clumsy Indiana Jones in a child’s cartoon, or maybe Professor Oak. His assistant, Dr. Reese Drake, is very monotoned and never really shows much emotion even when she is angry or embarrassed. Once in a great while at the end, she does seem to lighten up but other then that, no emotion. We could just have a computer instead of her and we wouldn’t be missing much. There doesn’t even seem to be much reaction between Zoe and Dr. Drake even though they are sisters which is rather sad. I would love to see more about their relationship instead of the whole ‘hey, she is my sister and you can probably forget about that because we are never going to show any emotion like normal sisters do.’

Let’s talk about the villains now. Pretty much, Doctor Z would really be the father of Eggman with the outbursts and trying to take over the world lines. He wants to be king of the dinosaurs, and yet he can’t even take care of his own minions. His minion (and stepson), Ed, is so stupid, he doesn’t even know how to spell Z’s name for crying out loud! I most of the time want to call him Meoth and have him meow like him. Ursula always acts like the queen, commenting on her looks and acting as though she should be taken care off (Much like Jessie from Team Rocket). She also gets bitten a lot by dinos. Her stepbrother Zander seems to be like James in that he tries very much to make her feel good (And that isn’t in the perverted way).

So, we can now talk about what a really stupid idea it was to make a Dinosaur Card Game for children who probably couldn’t pronounce the damn names of the Dinos! I mean, what child would know exactly how to pronounce Carnotaurus and Cryolophosaurus? I mean I can’t even pronounce them and I’m 26 (when I first reviewed this, I was 23)! Another thing that is rather strange is the fact that they brought in battle fields into the show about 9 episodes in. It is rather confusing since they were at first trying to make this show sound as though the dino’s were actually living breathing beings instead of just cards. Actually, again I am feeling like I have seen this before… in Yugioh.

The 3D animation stuff they have in the opening is really bad. The models look very broken and dinosaurs were never meant to actually dance. They seem to flop around without any reason. It’s also the same in the actual show. Models brake pretty badly and feel as though they would be better animated then CG. The only thing they did right was showing the breathing of the dinos but that’s only a small bit for them to look ‘alive’ I guess. The textures on these modals are colorful but definitely not nice. It’s like they made the textures overly pixel-ated and choppy. The transformations make me want to yell out ‘DIGI EVOLUSION!’ because it acts pretty much the same. The 2D animation actually looks pretty good and the dinos in that form look cute too. So much that I might have wanted one as a partner too. They just really messed up by adding the 3D animation.

Warning, it was 4kids dubbed and when people say that they messed up a lot of shows, they probably included this one in that. The voices of the main characters are really bad. Zander and Ursula sound so much like Team Rockets Jessie and James that I normally feel like I’m watching Pokémon instead. The stupid little puns they forced into the show feel like there are way too much. We can’t go five seconds without a pun it seems because everyone does them. The music is supposed to be upbeat and fun but it sounds like they were forcing it, it doesn’t fit this at all. I can’t really stand the opening song and the background music feels like it’s ripped from Sonic X.

Overall, the whole show just seems rather pointless. If you’re a big fan of Dinosaurs, there might be something for you but I don’t see what you can get from it. The Dinos’s don’t look real at all, the coloring just feels like its overly bright and childish. I think the only thing you will get from it is the names of the dinos.