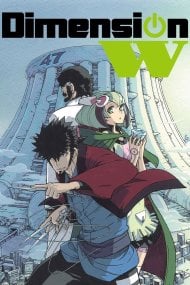 This anime went beyond my expectations. I didn't think I would enjoy it as much as I did. So I am glad that I decided to give it a shot. While the story was slightly above average this is where they needed the most improvement. I felt that the logic of some of what happened felt off. Like the antagonist getting a lecture as he is about to be forced back into the realm of posibility or Dimension W or something. There were other things that I felt were quite oddly added without expanding on. Like The older prince's deviousness which I guess was all an act? or the outburst by the main character when he thought the young prince was dead... he almost seemed to transform... but then he calmed down at it was the only time he acted like a wild animal. He was brutal at times don't get me wrong but... it felt like he had a split personality shown as a shadow self for a while there that really wasn't expanded on as much as I felt it could have been. Overall though it was a decent show and. I didn't feel it was generic or cliche at all really. Which is rare these days. The animation was high grade. It was the type of animation I really like. All the fight scenes are done excellently and even the moving around and facial expressions are done exceptionally. It's been a while since I've seen such exceptional animation that is completely the same throughout the whole anime and doesn't change in quality or style at different parts like in Divine Gate. The sound is exceptional. They picked the best voice actiors to fit the parts of the characters perfectly and they also made an exceptional intro song and animation that I adored. The characters were all interesting and created well. If there was any issues I had with any of them it would be how some of them were not given as much time to get deep into who they are and what they are really like as I'd have like to. I mentioned it before but both the older prince and the main character seemed to have some sort of shadow or split personality which wasn't really expanded on as much as it should have been but maybe that was because of time constraints. The main character is handsome strong and hates the newest technology which makes him someone I really adore. He is what made the character score so high. He has a tough past that again could have been gone into more. I wanted to know what made him always out in fights like he was the day he meet the woman he liked. Where he ended up with that nearly super power from and many other things which were not explored. Overall, This anime was excellent and well worth the watch for any futuristic or action anime fan. It also leaves on a fairly satisfying note... something many anime don't do lately. So give it a try. You'll be pleasantly surprised. I know I was. - Monthly Marathon April

This is a good watch. After the first couple of episodes, I was definetely hooked up and I ended up watching it all in one go. It's a 12 episode anime, so there is basically no filler and the pacing is good. But, on the other hand character development is a bit lacking.  A couple of decades in the future, the world's energy problems have been solved. A new dimension has been discovered, dimension W, and scientists have been able to capture and harness the energy from this dimension using coils, devices that function similarly to batteries. Obviously, reality isn't this straightforward nor is it so idyllic: there are many things that New Tesla, the company that has patented the coils and that has monopoly on the production of energy isn't saying; while researching dimension W and the coils several tragedies have occurred and have been covered up, and the full potential of this new technology is still yet to be explored and understood. I really liked the opening scene where you see our protagonist, Mabuchi Kyoma, a tough no-nonesense-don't mess with me guy working as a mechanic in an outdated and anachronistic garage, surrounded by rusty car frames, while on the news they're saying that in 3 years time electrical cars will have completely replaced prior models and that gasoline prices have skyrocketed. He's a collector, a guy whose job is to collect illegal coils - but pretty early on in the story we find out that he hates coils and anything related to them, sticking to the old way of life with his gasoline-fueled cars and no-coils policy. While on a job he crosses paths with a female robot, Mira, who subsequently becomes his partner. I won't add anything else about the story to avoid spoilers, but Kyoma and Mira pair up to solve the mystery linking Kyoma's past to Mira's creator, New Tesla and the coils. The pacing is fast, the story keeps you on edge and the ending is quite satisfactory. As for the characters, starting from Kyoma they're all likeable. It's only 12 episodes long, so most of the characters aren't given much analysis, depth or development. Kyoma is naturally the one with most screen time, he has a back-story that motivates him and makes his feelings, actions and reactions perfectly understandable. He doesn't exactly develop as a character, it would be more correct to say that he undergoes a sort of loop whereby at the end he regains an awareness that he already had and had lost. Mira is also a likeable character, even if she remains sort of a mystery to the end. For a robot, her feelings and reactions seem to be a bit too similar to a human's ones; but there are only hints about her nature. I don't know exactly why, but Miyabi reminded me a lot of Mayuri in Stein's Gate - maybe the relationship between Kyoma and Miyabi is very similar to the one between Okabe and Mayuri; it doesn't really matter. It's a plot-driven anime, so most of the characters have a precise role in the story to carry out and do just that. They aren't rounded nor detailed very much as characters per se. Visuals, animation and sound are all pretty good. Overall, Dimension W is an enjoyable anime. It's not great, it doesn't analyse its characters in depth nor all the implications of the world it is set in. But it's fun to watch and the story is engaging. So, thumbs up.

this made me think ninja meets advanced tech. also robots, bounty hunters that go after "coils" instead of people. its fast paced and lots of fighting action. the characters dont develop much but it does happen some. the back stories are interesting, some sad, and add depth to the characters that might seem not there at first. at the end all i could think was i want a second season. 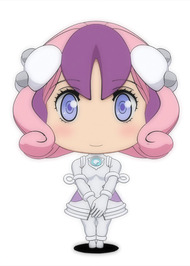 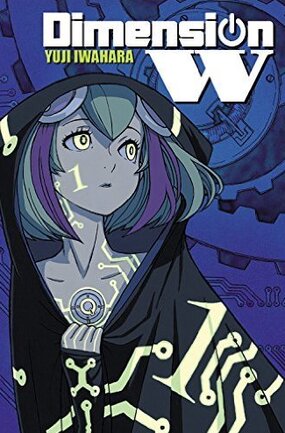