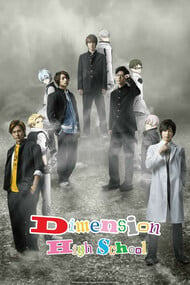 One day, on his way to high school, student Junpei picks up an unusual looking rock. Thinking nothing of it, he heads to class. While in the middle of a session, the rock comes to life and transports him and four others to an animated world! To make matters more interesting, the group is introduced to a giant sphinx who is determined to take over the world! Now, to protect their world from invasion, the group must work together as anime characters and real-world humans!

The Thing Most Precious to Me

A Hole in His Heart

Now... I probably don't have a right to write this review, as I only managed to get through the first episode. However, the purpose of this review is to inform other like minded individuals that it was that bad. I had originally taken interest in this program because I was curious to see the human characters turn in to animated ones, and kind of defy the rules of the real world, and maybe experience the animated world as only someone from the human world would...if that makes sense.  I thought it would be cool to see these reality turned animated characters then go on adventures/ adjust to the animated world while battling animated foes. HOWEVER this does not quite seem to be what the show is about. STORY: The Overview anime planet has should read:  One day, on his way to high school, student Junpei picks up a rock. Thinking nothing of it, he heads to a study group. While in the middle of a session, the rock comes to life and transports him and four others to an underwhelming CGI world! To make matters even more uninteresting, the group is introduced to a giant CGI sphinx who seems to have taken over the CGI world, except for one pristine classroom (*where the characters will do all of their animated solving)! Now, to protect their world from invasion, the group must work together by solving meaningless riddles as CGI characters and real-world humans! *however I've only seen the first episode, so perhaps the animated world expands outside of this classroom in episode 2. I don't know, but I don't plan on waisting my time to find out ( as harsh as that seems, i'm really trying to save others from having to sit through that).  ~Spoiler alert~ After discovering the rock is sentient, the group of teens get transported to a CGI world, they are locked in one animated room, with no one else present. A giant CGI sphinx ( of all things??) pops through the wall and forces them to solve riddles, or suffer the consequences -pseudo death. When returned to the real world, they find that although those who were killed survive, they lose something most important to them after they die in the CGI world. This really isn't as interesting as it maaaay seem ( if this seems interesting at all, just know whatever you're imagining is probably a stretch.) and that is the entiiiiire first episode. Save yourself. ANIMATION: Come on. This was made in 2018, and I feel like the animation in 90's anime is better. Their hands go through their bodies. Although they're self aware of this, they seem to try to make it something cool, but in reality, it just looks like bad animation. Of course this is my subjective opinion. SOUND: Meh, it comes across. Nothing briliant CHARACTERS: Meh. Basic characters you see in many anime ( the smart type, the sensitive type, the average boy who actually turns out to be the leader, despite not appearing to be the leader type at first...you get the point) The acting is meh, and judging from the first episode you can kind of tell who these characters might become, which makes it even less interesting. Meh. The actors/ crew were probably giving it their best, so for that, I would like to encourage a different audience to watch so it doesn't go to waste.  I might reccomend it to Japanese speaking young children as an educational program? I guess? Aside from that, I would not reccomend. I feel so guilty for writing such a bad review, and I know that to a certain demographic ( much younger, with more time on their hands) might really enjoy this kind of thing, so for that I am sorry, and I think they should continue to do/ watch the things that they like despite my opinion.  However for those of you 11+ ...I would just encourage you to watch something else, as this- despite the premise being seemingly new...was just not that novel or entertaining at all.  -Samie <3

Don’t believe the hype. Heed my words, citizens and dwellers of Anime Planet, and listen to me acknowledge my truth about Dimension High School being something watchable. Yes, watchable! Entertaining and endearing too, if you so choose to open your heart to it and just let the goofy acting be. It’s something that maybe shouldn’t really be counted as anime, given that it’s one part awkward J-drama and one part shitty CGI. But beyond that, it’s got most of the trappings of your standard anime anyway, so this should get a pass. BL rom-com hijinks? References and wordplay only Japanese viewers would understand? Heading to random dimensions as part of a group of high school boys chosen to do battle against insane beings who want to devour our planet? Kid, you better believe this show’s got all the tropes and more – added bonus for being so smart about making this stuff so entertaining. Dimension High School is so dumb, it’s good, and that’s just me talking about the hammy acting. The puzzles are a brain-drain, for sure, and it’s hard to learn new things about the Japanese alphabet when the show has other things like dialogue and plot progression to worry about – but it’s the intangibles that more than make up for these things. By intangibles, know that I mean everything else that makes a show easy to watch and even easier to remember. This means: the characters, the interactions, the chemistry, and the dialogue. There’s no closer group of fictional Japanese friends than this one, never mind if they were all unwilling participants in a remedial class tasked with saving this universe. Never mind, even, that these guys obviously look a little old for high school students. But who cares about all that when you have a talking rock, a family of Sphinxes who like to throw riddles at our main characters, and gay subplots for days? Dimension High School is a show that knows what it wants and isn’t one bit ashamed of the things it has to do to get to its goal. See it in how all the actors here are 101% invested in their characters, listen to it in all the stifled laughter that everyone’s careful to keep in as they’re saying their lines, feel it in how sincere this stupid show is about having a talking rock help a bunch of high school boys solve Japanese riddles. It’s tough to hate on something that’s so clearly having a blast with itself, and even tougher to shit all over a show that wants you in on the fun too. It’s silly and over the top, but it’s also an oddly endearing thing you won’t regret investing some time in. It’s really too bad the love for Dimension High School on this website is only a secret thing shared by a precious few. But I’m positive that if there’s any show that can break out of the stigma of awkward live action acting, it’s this one. It’s been my happy pill for all the weeks it was on, so it’s hard to imagine this as anything but that to anyone else who might give this a genuine shot. 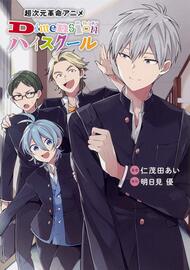