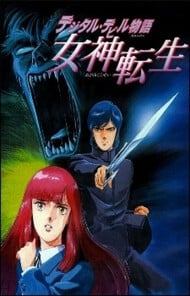 At Juusei Academy, students are given the best education that money can buy… but there's a catch. Unknown to his classmates, the computer genius Akemi Nakajima has misguided plans to revive the demon Loki; and unfortunately for his classmates, teacher and new transfer student Yumiko Shirasagi, this requires plenty of sacrifices -- a job that falls to them. What Nakajima doesn’t know is that reviving Loki is the pretense for many demons to come, and that the fate of the world may lie in his and Yumiko's hands… if they survive long enough to defeat the ultimate evil!

OK, so what do we have here? A game tie-in anime from 1987? Hrmm, sounds interesting, especially since it's based on the original Megami Tensei for the Famicom. As a fan of the Shin Megami Tensei series, I was initially skeptical that there was even an anime based on this. However, let's be honest here: it was 1987, and with the OVA scene booming in the wake of Megazone 23, just about anything could have been done. ANIMATE took it upon themselves to make an OVA of Digital Devil Story: Megami Tensei. It fares about as well as any game tie-in does. By that, I mean badly. It's just not a good OVA. The biggest problem with it is that it pretty much assumes that you have either read the novel or played the game. Luckily for me I had read about half of the novel, so I had a good idea of what was going on. However, if you're not in the know, prepare to be left in the dust. The story goes that Akemi Nakajima is a 17-year old computer genius (back in the day when computers were still a rarity) who writes a Demon Summoning Program with the ability to—you guessed it—summon demons. He inadvertently summons the mythical Norse god Loki, and because of that he ends up having to save the entire world. The rest of the story is pretty foggy, but rest assured that the translation of Megami Tensei—which is “reincarnation of the goddess”--is elaborated on, but only briefly. Again, the OVA expects you to have read the book or played the game...or both. For an OVA, you would expect the animation to be at least respectable, but it's really no better than any other anime of the time. Megazone 23 this isn't. Another huge problem comes with the lighting. It's a complaint I rarely make in anime, but it's a prime concern in Megami Tensei. In what I think is an attempt to be like film noir, the scenes are constantly dark, dingy, or rainy. It gets annoying real quick and strains your eyes. Were the animators afraid of the lack of animation? The character models aren't bad and actually match the head shots in the game fairly well, but it's the overall animation that really is no good. Another aesthetic that hurts the anime big time is the music. It's normally a small complaint, but the music is jut bad. It's your typical '80s synth music, but that just doesn't work here either. The stuff that would have worked is remixes from the actual game. There really isn't too much else to say. Megami Tensei is just your typical bad '80s OVA. It just so happens to have the Megami Tensei name attached to it, and that is a real shame. Almost 25 years later they did get it right with the Persona: Trinity Soul and Persona 4 anime, but this first attempt gives off the stench of a cheap cash-in.

Story: A girl named Yumiko transfers to Juusei Academy and finds very accepting people except for one guy, Nakajima, who treats here like dirt and seems to have a large amount of power, given the students and even teachers scrape and bow to him. Later that night, Yumiko spies on Nakajima and finds, to her horror, Nakajima is trying to summon a demon by the name of Loki through his computer. Eventually Loki is able to be fully summoned out of the computer and turns on Nakajima, almost killing him and Yumiko. Through a brief series of events, Yumiko and Nakajima break free and eventually end up killing Loki. The story seems very easy to follow, but the anime makes it difficult to understand what is happening and why. Throughout the story, Nakajima constantly shifts between dreams and real life and when Yumiko is almost killed, a woman speaks inside her head and she gains the ability to shoot lasers from her eyes. This is just a sample of the crazy things that happen through to the end and it is very hard to understand how any of this has a connection to the main story. The only reason the story did not receive a lower score was because there was a basic story that moves from point A to point B and the usage of computers for demon summoning is a really neat idea, but even then, it was hard not to give this a worse score. Animation: This OVA is from 1987, so the animation is not expected to be on the level of the animations of today, but this was one of the better aspects of this anime. There is a bit of gore in this and it was done pretty well, but that is about the only part. For the majority of this anime, the color scheme uses just about three colors almost the whole way through, green and black with a bit of red. There are a few times when other colors are used, but by the end, it is easy to forget about them. At one point, Nakajima is looking out across some mountainous land and the art for it was actually really good, but is quickly gone. Overall, the animation was about mediocre, and barely. Sound: The voice actors did their job, but it is nothing to brag about. They conveyed the appropriate emotions at the right times, but that is about it. The music was just horrible 80's synthetic music, if that is what you could call it. It did not fit the anime at all, when there was music, considering there was just a lot of silence throughout the majority of it. Some of the sound effects were not bad, though, so it saved the OVA a little. Characters: There were characters in this? On a serious note, the characters in this were just horribly done. There was no background to them, except Yumiko is a transfer student and Nakajima is a computer whiz who is trying to summon demons. There are incidents that happen to the characters throughout, but there is no knowledge of why or what they have to do with anything pertaining to the rest of the story. These characters really are nothing but just lumps of flesh running around doing something that is supposed to be important. Overall: Being a huge Shin Megami Tensei fan, this OVA looked like it would have been pretty good, but the shock of how horrible this turned out to be was just incredible. Even for major fans of this series, this will be a major disappointment to most, if not all viewers. The bad animations, bad music, and horrible characters are just a few of the turn-offs of this anime. Unless you have nothing better to do, you would have a more enjoyable time playing with the neighbor's rabid dog. 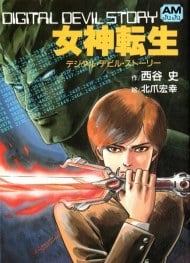