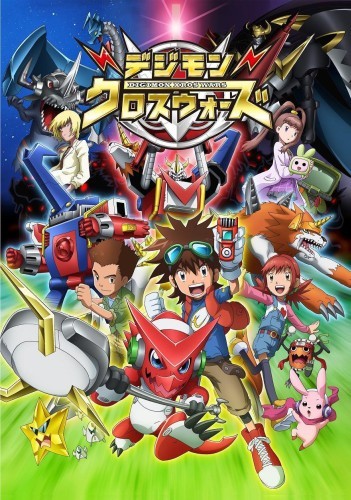 This is the sixth Digimon season and its fourth spin-off. Most of its elements have remained the same so please read my review on the earlier seasons before reading this one. I will only be mentioning the differences amongst them.

Despite the franchise’s attempts to be more mature with Savers, the sales were still not that good. People had simply gotten over the whole fad by now and thus there was very little interest in it. Yet 4 years later they make another one in hopes of rekindling the interest of the newer generation. And boy, did they mess up badly. It’s not like there ever were too in-depth stories in the franchise (although the third season was really close to that) but at least they were giving you the feeling of progress, and there was always some sort of plot twist along the way. This time they didn’t even bother to make it at least a bit mysterious and went for a completely simplistic and repetitive plot. I liked the Digimon franchise for trying a lot harder than Pokemon to offer an on-going plot, so in this case I was greatly disappointed to see IT IS POKEMON!

The production values are good in terms of artwork, but compared to the year it came out, it seems to have crude animation and unimpressive music themes. There is way too much emphasis given to energy attacks instead of body motions, and most of the lead Digimon’s transformations look bulky and ugly.

There is no innovation or much of a story to write anything about. Some kids are taken to the Digiworld, where one of them is immediately identified as the prophesized savior. He is teamed up with a snotty Digimon who wants to be the king of the world by trashing the current evil empire that has control. And this is where all the story stops since all you see later on is episodic missions. They go to one area, beat the local villain, secure some sort of code that is needed to unlock the final boss mission, and move on. And it keeps up like this FOR THREE SEASONS OF REPETITIVENESS! Completely boring in a few episodes.

What is even worse is how they took out all the importance of secondary characters. The previous seasons had several kids with their own role in the story, and every Digimon had its own style and character. You can forget all than in this season because besides Taiki the destined hero, and Shoutmon his megalomaniac Digimon, all the others are mooks! Seriously, only Taiki has the device that allows his Digimon to fuse with others and fight the evil monsters. And only Shoutmon has a goal in the show. All the others are just cheerleaders or useless mute cameos from earlier seasons. Hell man, even the enemy Digimons are now mostly mass produced goons without a voice and a personality or one-dimensional megalomaniac villains. And geez, they defeat an entire army of them in almost every episode, thus further lowering their importance. And how is it possible to do all that since episode 1 you may wonder? Simple, THERE IS NO LEVELING UP ANYMORE! Instead of having a gradual upscale in powers and moving from, you know, basic, to warrior, to super, to mega, here all they do is fusing Shoutmon with any Digimon they have handy at the moment to go beat hordes of mook monsters with little effort. It’s like he can turn from basic to mega right away and already from the pilot episode. WHERE IS THE INTEREST IN THAT?

The crapiness doesn’t end here, since even these crummy details are further ruined by even more ridiculous handling. Imagine a Digimon, whose only role in the show is to be a cute mascot. It is called Cutemon! For Pete’s sake! There was Palumon in the third season looking all cute and such, but it eventually had a very important role later on and its name was never iamherejustasamoemascotmon. And it also seems they have run out of names because all they are doing is adding a prefix to an already existing name. Do you remember Leomon? Here comes MadLeomon, just because he is evil. As for Shoutmon, he is a very irritating critter from playing it all bossy and pushy and keeps screaming how he will rule the world. As for the way he fights, even that is lame. He can fuse with any other Digimon to turn into a ridiculous looking mecha. And plays hard rock, as if that makes him badass in our eyes. Well no, he is very obnoxious and immature and I hate him! As for his name, it changes when fused to the most innovating Shoutmon V2 and then Shoutmon V3. Pure genius. And as for the hero of the story, he is named Taiki. Which again is a rehash of the first season’s Tai, with an extra ki in the end. Other than that, THEY ARE IDENTICAL!

This crappiness continues for THREE SEASONS and then the rather charismatic hero is replaced by a complete idiot successor, who runs off to bring in cameos of earlier characters and Digimons, just for the sake of having something to fill in this shitty show. Did they forget how the second Digimon show was bad for placing too much importance on cameos instead of fleshing out the setting and the characters? This thing is nothing but a hollow cameo parade of stunts and episodic Pokemon missions!

This is by far the worst setting of the franchise. A complete and utter disaster! Keep away at all costs!

Since I am following the franchise from their birth till now, I see they are almost deliberately making one good season, followed by a mediocre to bad season, before returning with something quite different and exciting. What I mean is:
- The first season, as basic as it was in overall plot, was also very good for its time (especially for proving to the anime fans what a crap the Pokemon anime is).
- The second season was nothing but a lighter version of the first, and felt too much like a tired rehash full of cameos that didn’t manage to get you equally excited.
- The third season was WAY too different that the other two, with a far more complicated and darker story. I really liked that one for boosting the sci-fi elements, and even becoming thriller at times.
- Then the fourth follows, which is a complete disappointment; nothing but a boring adventure to go save the world with far less substance and perplexity than even the first basic season.
- Then came the fifth season, where again it is a lot different than the rest by changing the artwork to a far more shounen style, and offering the characters a sort of profession instead of being aloof. Heck, even their Digimons where talking in a more mature way.
- And now we get the sixth season, which according to tradition needed to be mediocre to bad. Once more it feels like nothing but a rehash, heavily based on cameos and with little to no substance and perplexity.
- And if they follow the pattern, the next season will come out 5 years later (2015) and it will be a good one.