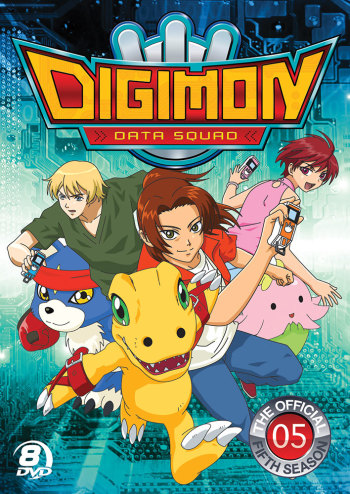 This is the fifth Digimon season and its third spin-off. Most of its elements have remained the same so please read my review on the earlier seasons before reading this one. I will only be mentioning the differences amongst them.

Savers marks the era where we no longer get one season every year. It was produced 3 years after Frontier, probably because the sales from that crappy season weren’t good at all. Thus the improvements in the production values are more than obvious, plus the animation style is more realistic than before. It looks more detailed and refined. I can’t say I liked the music themes.

This time the scriptwriters experimented a bit with the formula and went for a more action/shounen show instead of a children’s adventure. The heroes are teenagers instead of kids and form a police-like squad with Digimons, in order to protect the human world from evil Digimons. Along the way, misunderstanding and fear lead to an all-out war between both worlds that lead to apocalyptic proportions.

I liked how they once again had adults in the story (the officers of the police force) and how the story becomes darker along the way, like in Tamers. Having teenagers was also an easy way to have more active characters instead of crybabies. There are also all sorts of foes present instead of just one type (Digimons, humans, mechanical destroyers) and each one has more reasons to fight than just to conquer the world. The theme is the coexistence of the two worlds and it is not clear who is right or wrong. Both sides are very aggressive to one another, with hatred and fear standing in the way of peace. It almost turns the series into a superficial war drama.

Another twist is how defeated Digimons revert to Digieggs instead of simply dissolving into stardust and respawning elsewhere. It makes it more worthwhile if there is something left behind as a souvenir from a victory. Later on this gets more serious as Digimons and humans can actually die PERMANENTLY … Ok, it does have its share of “revive” magic but it is still a bit creepy to see that.

In all, it was a nice twist to an already established idea. It would be a lot better if it lasted less episodes, had faster plot and there were some “nasty” innuendos here and there. The third season remains the best for me for becoming really unsettling at times and having more psychological angst but Savers ain’t that far behind. Recommended if you want an above average action / shounen with monster battles.