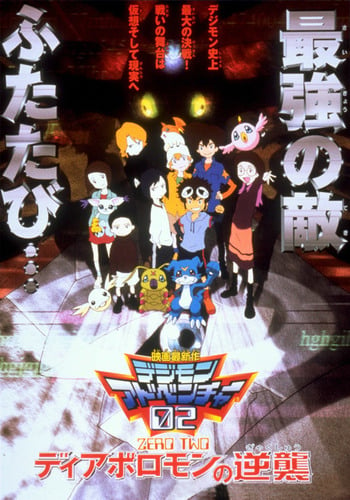 If you're looking for anime similar to Digimon Movie 4: Diaboromon Strikes Back, you might like these titles.

Both of these movies have a similar feel. They both have kids interacting in the real world, and fighting in a digital one (indirectly fighting with their Digimon and avatars) . The way the internet is depicted is also similar. They also have themes of friendship/teamwork.

In a world where digital monsters (known as Digimon) have begun attacking mankind and are causing chaos and confusion, Digimon Tamers such as Takato, Rika, and Henry keep the peace and vanquish the malicious foes. One day, while waiting for a train, Takato and Rika got the surprise of a lifetime: a black and mysterious train-like Digimon who has commandeered the rails and is steaming its way all over the city! Its origin is uncertain and all it wants is to keep running and running… but beneath the surface, something sinister is going on. Can the gang stop this new menace and discover the source of its errant behavior, before evil forces can put their nefarious plan into action?

Takato and Guilmon go on vacation to Okinawa and meet a fellow tamer, Minami. Back in Japan, a popular computer pet suddenly becomes a virus, infecting all of the computers who have it. As the virus spreads, Takato tries to figure out why digimon are all attacking his new friend, and what her connection is to the virus.

The five digi-destined children stumble upon an ancient island inhabited by two different types of digimon; The Beast types, and the Human types. When they see two young digimon-a beast and humanoid-have become friends, they decide something must be done about the feud.

Raised by cats until he was five, Yamato Delgato's only dream was to play B'Daman - the official sport of the B'DaWorld. His dream comes true when he's chosen to wield the most powerful B'Daman ever, the legendary Cobalt Blade, as only he has the skills to harness its power. This is his journey into the world of B'Daman as he learns valuable lessons and also tries to save the B'DaWorld from the evil clutches of the Shadow Alliance.

After winning the Japanese Beyblade Championship, Tyson and the rest of the Bladebreakers are going on vacation! They travel to their teacher's house for some rest and relaxation, but their beach getaway is interrupted when Daichi appears, demanding a rematch with Tyson. However, their battle is put on hold when the mysterious Shadow Bladers appear and kidnap Daichi and his rare Beyblade, Strata Dragoon. The thieves, evil spirits that had been sealed away for many years, plan to use Strata Dragoon to unleash their true power and destroy the world. Can Tyson and his friends rescue Daichi and defeat the Shadow Bladers before it's too late?