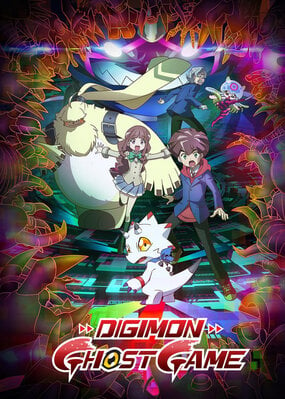 Not far in the future, technology has advanced. On social media, dubious rumors are spreading about the mysterious "hologram ghost" phenomenon. First year middle school student Hiro Amanokawa activates a strange object left behind by his father, a Digivice. Suddenly he can see mysterious creatures that no one else can, called Digimon. That's how Hiro meets the mischievous Digimon, Gammamon, and his whole world changes. Now he's confronted scary monsters like the "mouth-sewn man" and a mummy that kidnaps humans.

A Strange World As Told By Naoto Takenaka

The Mystery Of The Museum

The logic is it's digimon. But with hologram ghost as the show calls them. Frankly the story progression is slow. It's not a bad anime but higher and higher I go on episodes the more dark it seems to get. I stopped at 29 because you know. Fortune Teller, then vampires and among other things like voodoo Dolls on episode 30 which I didn't watch it just all adds up to a bad taste in my mouth really and not palatable.