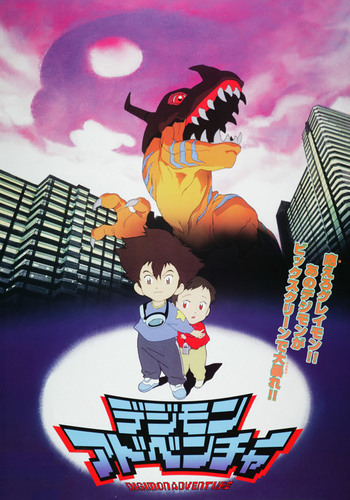 While this is labeled as a movie, it's more like a short/special episode. This "movie" covers an event we hear some about in Digimon Adventure--the moment where the Chosen Children become Chosen.

It's a fun story to explore. The anime told us enough that we didn't need this short, but not enough to destroy the fun of watching this.

I loved seeing the designs of the kids when younger, and I found the interactions between Tai and Kari adorable. You can really tell how close they are by how they are able to communicate with so few words. Kari was especially cute, with her whistle.

I do wish there was some explanation as to why it's Tai and Kari who are essentially chosen before being chosen, but it works in the sense that Tai is pretty much the leader of the group in the show.

As for Koromon himself... I'm torn about how I feel about him, and this is a little bit of a problem throughout the show itself (namely, near the end of 02). I don't quite understand why most Digimon are intelligent and can be reasoned with and can hold actual conversations (even as babies), but then there are some that act almost akin to animals/monsters. It worked in this movie to have Koromon not communicate much, as Tai and Kari aren't supposed to know too much about Digimon before Adventure starts. Though, I also don't understand why Agumon was so much bigger than normal. Small complaints, but even as a young kid, those two things bothered me about this movie.

I'm also torn on how I feel about the animation. In some ways I like it, and it certainly makes the kids appear cuter, but it also has a lazy feel to it, as if it was something they animated quickly. Still, it matched the show well enough that it worked.

Overall, it's a fun little movie, and a nice glimpse into one of the most important events of the entire show.

I loved watching this. First off it is an origin movie, I recall seeing this in the first run Digimon series. I love how it was expanded and explained how the main characters knew about Digimon in the series.

Animation was great! It was what I am in love with, old style animation. Bold lines, darker themes, and almost realistic art. Sound was great as well. No opening theme, but the ending theme is pretty good. In story music I feel like I've heard it somewhere else, just can't recall, but is also good.

Characters in this one I think interacted well even though it is only the digimon, and the brother and sister characters. I don't think anything really needed explaining, it explains itself, and I also already watched the initial series. If you just jump into this without watching the series though you would probably want more explanation on everything.

Overall a lovely watch and recommend it to anyone who has watched older anime and or anime movies.

Story: First off, this isn't really a movie. Its more a fifteen-minute short telling us how Digimon really started. This isn't the most interesting of the Digimon films. But, at such a short length I suppose it can't really pave way for a superb storyline.

Tai and Kari, only about 5 or 6 at the time of said incident, come across a Digi-egg. Soon to hatch from it is Koromon- but take note: This is NOT the Koromon from Digimon Series One what Tai befriends. This one is somewhat less intelligent, less friendly when digivolved and much more troublesome. Overnight Koromon then digivolves to Agumon, and, with Kari on his back, sets outside for a nice midnight stroll. Tai, worried for his sisters safety, runs outside to save her when an enormous Digi-Egg appears in the sky and out comes a giant green bird of a Digimon, what immediatelly goes for Agumon and tries to fight him. Digivolutions take place and so and so happens like you'd expect it would. The other soon-to-be-digidestined witness this event, what turns out to be the very event what leads them to becoming the chosen ones.

Animation: Not great. The people in this look sloppy, with exception for main characters like Tai. Sora, Matt and all the others looking at the fights from their windows really do look in horrible shape. All in block colours the animation is TOO simple, even for an anime of that time.

Sound: The soundtrack for Digimon is so cute <3 Its the same old songs as every show for this film really. Nothing new.

Characters: As much as I absolutely adore the characters in the original Digimon as if they were my own children, they aren't really explored in this movie. Tai is shown as a frequent joker who loves his sister and works hard to keep her in ckeck. Kari is shown as a cute little girl who quickly comes to love anything, including black fuzzy Digimons hatching out of weird eggs from an unknown destination. Like I've already mentioned, the other characters aren't really seen much so aren't really expressed very well.

Overall: If you like Digimon and want to know how the characters came to be the Chosen Ones then you'll find this an interesting short, but if not then this won't really appeal.