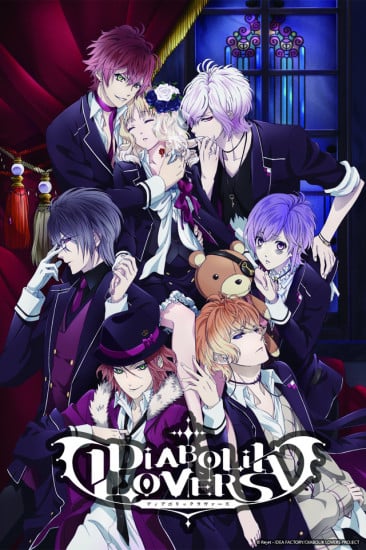 A girl finds herself in a house full of bloodthirsty vampires. Unable to escape and with traditional anti-vampire weapons being useless, she becomes lost within the labyrinth of hallways.

Both anime have been adapted from otome visual novels, and subsequently aimed at women.  Each show has fairly similar character designs, with that classic "sexy bishounen" look being common place. Reverse-harem traits are in both too. The main girl of each series also have their similarities.

Both series are absolutely terrible as well, which is their biggest similarity if you ask me...

Both series feature bishounen Final Fatasy rejects attempting to woo, a bland female protagonist. The guys each take their turn with the doormat protagonist insisting that she belongs to them. The guys are controlling when they're not being outright abusive.

In Amnesia there's bits of an interesing plot between the girl dating her bishounen suitors, whereas in Lovers she's actually locked in with her rapey harem with no hope of escape. But both series are aimed at the same kind audience so if you saw one and want more like it then watch the other.

If you ever feel like watchign a Otome adaptation where a bunch of guys compete for a girl's hear in sometimes abusive way, then look no further, these two represent each other almost perfectly. Charachter design and general feel are quite similar as well, so I gues that you'll probably like one if you liked another...

I think that Amu and Yui are similar in that they don't really know what to do with their lives now that they  have canged so dramatically. But if you liked one anime you will like the other also long as you like vampires and superpower animes.

If you like reverse harem style anime, then you should like UtaPri. Utapri is about a girl who enrolls in Saotome academy in the hopes of becoming a composer and someday writing songs for her idol, HAYATO. During her time at the academy, she becomes close friends with six bishounen who all end up falling in love with her. However there is a 'no romance' rule at the academy. This show has a second season and a third season has been announced for spring 2015.

They both have lots of cute guys and one girl. They try not to show that they like them but they actual love the girl. That makes it all sweet.