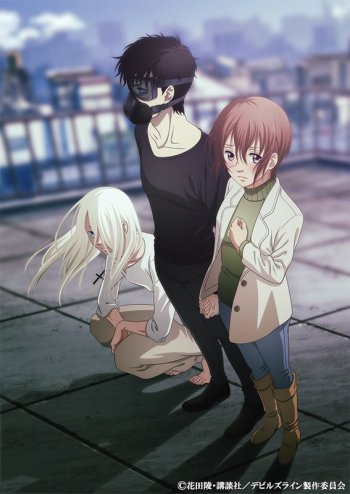 Devils Line , as I went into this anime I was ready for another Vampire Knight kinda thing but was actually fascinated when it turned out to be similar to one of my all time favorites... Tokyo Ghoul.

Please try to keep in mind the description doesn't do it justice and the first episode isn't all that great but I assure you it gets better!. The story develops very well in the following episodes so stick to it.

As a result of watching I'm now a huge fan of Yuuki Anzai(main character who I think should be Ken Kanekis' best friend lol) who is a half devil half human, his character itself is one of the main reasons the story is so good. I highly recommend you give this anime a chance.

Devil's Line had been in my "to watch" queue ever since it aired. I finally got around to watching it this weekend and enjoyed it so much, I ended up marathoning it. I am surprised at the amount of negative comments I've read concerning this anime. This is an anime that is based on a 13 volume dark fantasy manga that was completed in December 2018.

In some ways it reminded me strongly of Tokyo Ghoul and slightly of Anjin, not that this is a bad thing in my opinion as I enjoyed both of those for various reasons. But again we have a different species of creature, that if chooses can sublimate humans, living parallel with and blending in with them. Toss in the expected fear and distrust that Humans would naturally have toward others stronger than and different to them, and well, you see where this is going. Despite these similarites, I do think this brings some uniqueness and charm of it's own. The strongest, being the way that main Vampire Yuki is handled and his character is fleshed out.

I think most people have trouble getting past the first episode but I think if you hang in there for an episode or two more, you'll find that the story keeps improving and really picks up momentum. I actually enjoyed it from episode one but there was a definite shifting of plot and gears after the first few episodes.

I found the characters fascinating and really thought the character building for Yuki Anzai especially good. I'm not into spoiling so I won't go into too much detail, but I could really empathize with his internal struggle. I was rooting for him the entire series. The ending was realistic and solidly done for a 12 episode series.

As I find that I would really like to learn more about the characters and what happens after the end of the anime, I will be reading the manga and hoping that they give this a second season, I'm sure there is great potential for this to be even better than season one. There is so much more I want to learn about many of the charactes and what they come from.

To sum up, found this to be quick moving, novel enough to watch and it left me wanting more. I can't believe I haven't heard more about this entertaining, thoroughly engrossing anime. I wish I hadn't waited so long to watch it, but I am very glad I did.

So I entered the spring 2018 season expecting this show to be a bit of a Tokyo Ghoul knockoff, and it pretty much ended up being that. However, what I didn't expect was for it to be as emo/chick-flicky as it turned out. I thought that maybe I had stumbled upon a Josei series, but turns out it is listed as a Seinen. It really should be a Josei. Long story short, the romance plot overwhelms any action and main story plot.

If you are into emo characters and stories, you'll probably enjoy this one. If you are looking for awsome fights and deep plot, stay away unless you are running out of things to watch.

Overall, it didn't suck (pun intended) and it was moderately entertaining. There were far worse shows this season with higher starting expectations.

This anime version of Devils' Line is more like a synposis for those who have read the manga, if you watched this without reading it beforehand, you would be left confused. Even, I was confused at some parts, because they didn't happen in the manga, or rather, there were parts rearranged to fit the anime, but was confusing to the viewer who knew what went on in the manga.

It was cool to see some of my favourite parts in action, however, I wish they kept the details that followed those events. In my opinion, the story line for the anime doesn't do the manga justice, I'd have to give it a 6 out of 10.

Typically I can watch an anime based off a manga, without bias, apparently that does not apply to Devils' Line. The animation was great, the sound was also great, the characters were true to themselves, even if episode twelve was taken out of context a great deal.

My overall rating would be 7/10, as apparently I am bias to the manga.

Over all, this is one of my favorite animes. It has all the elements that I really want out of a show- dark fantasy, mature romance, action, sub plots with twists. As someone rapidly approaching 30, I get tired of school romance animes. I wanted something for my demographic and this delivered, served up on a bad ass dark fantasy/ police platter. I watched the dub, and over all, I thought the sound was great. Adam Gibbs was a great choice for Anzai. If you're into vampires with a political subplot, this show is for you.