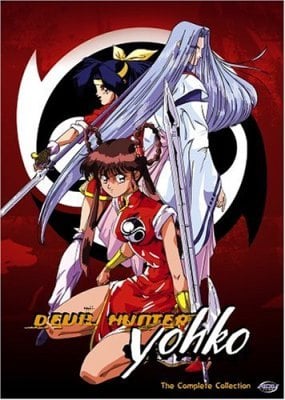 When a strange samurai tells her she is the successor of the swordsman Yagyu Jubei, Jiyu Nanohana refuses to believe him. But the descendants of Jubei's rivals have already sensed this, and one assassin after another is sent to attack Jiyu! Fortunately, Jubei left a little something for our heroine - a lovely heart-shaped eyepatch. As soon as Jiyu dons the eyepatch, she is overcome with Jubei's power and transforms into a ninja girl! Jiyu must put an end to the 300-year old feud between the samurai clans... before the feud puts an end to her.

Yohko and Jubei are both faced with a destiny they can't escape... fighting a very strange assortment of characters almost daily! While Devil Hunter Yohko is a bit more ecchi (nudity) Jubei-chan has it's own set of mature humor...with a lot of focus on breasts. Each one of these is cute and action packed... in it's own way.

Both these shows are essentially about a reluctant magical girl. Devil Hunter Yohko is slightly darker and involves monsters, while Jubei Chan is more akin to a martial arts movie/Magical Girl series. However, in both cases you almost sympathize with the heroins who just want to live normal lives.

Both are very humorous takes on the "magical girl" genre, although Kocho is much more of a parody.  In fact, Kocho seems to be almost a direct parody to Devil Hunter Yohko.  Regardless, both are chock full of fan-service and cute girls fighting monsters.

Unwilling girl gets put into ridiculously dangerous situations... by those thought closest to her! Devil Hunter Yohko and Amazing Nurse Nanako are both light-hearted series geared to get the guys going with plenty of fanservice and fighting action. Fun to watch, with likeable characters.

In a post-apocalyptic future, mankind now lives alongside demons, spirits and other supernatural beings. Everyone is interested in coexistence, but every society has rotten apples. The bounty hunter group "Hyper Police" does its part to catch and contain criminals, and with employees such as the half-cat, half-human Natsuki and Batanen the werewolf, law-breakers better watch out.

Fighting demons and doing it with cute style is an interesting correlation between Hyper Police and Devil Hunter Yohko. While DHY panders more to the fanboys, Hyper Police doesn't hold back the cuteness while kicking ass.

It was just a juvenile search for adventure that brought young mystic Nakahito face to face with the android mega-weapon, Kurumi. With just a kiss, she is activated and answers only to him. Now they embark on a comedic journey that will carry them across Japan to discover the secrets of the Steel Angels and how such technology has come to exist before the advent of television. In their travels they will encounter spies, army agents and rogue Steel Angels but the real discoveries lie in the heart of a young teen and the miracle he has awakened with a kiss.

Cute girls kicking ass. What more can an american otaku ask for? Devil Hunter Yohko is a shorter run, but equally action packed. There's a degree of spiritual themes in each and very entertaining.

Devil Hunter Yohko and Kotetsu are both a bit on the fanservice-y side, but they each integrate an element of the supernatural into an action-packed adventure. Both are great picks for the guy who likes ghosts, demons, swords, and the occasional panty-shot.

Both are 'magical girl' anime. However, Devil Hunter Yohko, to me, seems to be the 'evil twin' of BSSM. The two have surprizingly few parallels, but if Yohko is too blunt or raunchy, Sailor Moon may be more to your tastes.

Quite simply, both anime are about teenagers fighting demons with big swords and neat outfits. If one likes Bleach, they might find it interesting to view Devil Hunter Yohko, just to see how anime were slaying demons in the early '90's. If you're craving that old nostalgia of devil hunting, Bleach is a good modern version

Ohh, how far the nudity has come. The breasts and butts in Yohko were mostly fanservice, but Papillon Rose takes it up several notches, devolving into out and out raunch.  Both anime are fully self aware of their tawdryness and if one is up your ally, the other probably isn't far behind.

I think Shikabane Hime: Aka is sort of like Yohko for 2008. While it is much more serious and grown up, It still fills a niche that Yohko used to fill back in the 90's.