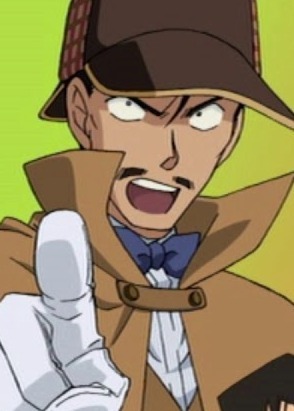 I'm starting to think that each Detective Conan OVA is destined to become progressively worse. The first OVA was outstanding, the second was interesting, and from there on out they began to suck in various ways. Detective Conan: The Target is Kogoro! The Detective Boys' Secret Investigation (say that five times fast!) easily wins the award for the most boring, uninteresting Detective Conan OVA I've seen thus far.

The first five minutes peg Detective Conan OVA 5 as being far more of a side story than a standalone feature. Sure, there's a mystery to be solved and bad guys to take down; but at only twentyish minutes in length, wasting a good six or seven on the gang interviewing Mouri, shadowing him, and watching his usual bumbling antics is not a good use of my time. After the shadowing takes place a bit of a plot is introduced with the usual generic villains, but at this point I became so bored that my attention span dropped dramatically.

I'd argue that even die hard fans of Detective Conan would have a hard time watching Detective Conan OVA 5. Its story is uninteresting and feels more like a muddled episode than a standalone mystery.

As with every Detective Conan title, the animation is passable and perfectly fine, but not groundbreaking or breathtaking. In particular, this version of the OVA has far better colors and saturation than the first few renditions, and the quality shows.

There's not much to say about the audio in any specific Detective Conan OVA; each has a borderline-cheesy soundtrack filled with jazzy tracks that help accentuate its story. While the audio serves as a decent complement to the investigations and deductions, it isn't memorable or spectacular.

Detective Conan OVA 5's best feature would undoubtedly be the comedic value of watching Mouri make an ass out of himself time and time again (not knowing that Conan and the Detective Boys are watching his every move). Beyond that, however, little can be said besides "remarkably average" to describe the characters and their interactions. Like every other Detective Conan OVA, there is no back story or explanation into the personalities or roles of the characters. They act accordingly, but don't do anything remotely exciting. The villains are once again generic and uninteresting as well.