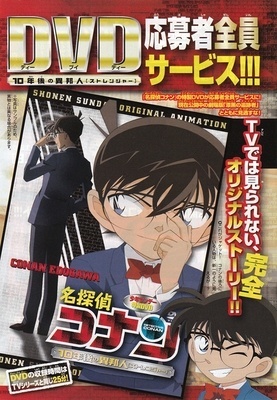 If you're looking for anime similar to Detective Conan OVA 9: The Stranger of 10 Years, you might like these titles.

Recently, a series of assaults have been occurring against seemingly unconnected people – or are they? Soon, Kogoro Mori discovers that he is somehow the key to these crimes; the people being targeted are connected to Mori in some way, have something in their name that correlates to a playing card, and have a symbol from that card left next to the crime scene each time. But who is the assailant, and what does he have in mind for Mori himself? Conan must once more use his powers of deduction to put a stop to the madness…

Kogoro Mori, private investigator extraordinaire, is behind bars! The well-liked but bumbling P.I. is linked to a mysterious explosion at Edge of Ocean, Tokyo’s new cutting-edge technology district, and the proposed site of the international Tokyo Summit. Enter Shinichi Kudo, master detective, who still suffers from an age-reversing drug and masquerades as the much smaller master detective, Conan Edogawa! Conan is intent on solving the case and freeing the father of his dear friend Ran, but as he uncovers a mysterious suicide and encounters some puzzling friction between two of Japan’s law enforcement agencies, seemingly every single internet-connected device in Tokyo, all the way up to washing machines and cars, suddenly malfunctions. A dangerous hacker is afield, pushing a deadly grudge, and to catch them Conan will need to enlist the help of the secret head of Japan’s Public Security Division: Zero, the Enforcer!

Recently, members of a group of thieves known as the Genjibotaro have been methodically murdered; their assailant is unknown. Meanwhile, Detective Mouri has been called to the Sannou Temple in Kyoto to find a stolen Buddha statue, and he has brought Conan along with him. With the help of Heiji Hattori, our heroes must solve these cases; are they connected in some way?

A vicious sniper has appeared in Tokyo, rendering the people too scared to go outside, once again it's up to Conan to figure out the meaning behind the killings and capture the mysterious sniper before more lives are lost.

Conan is back, and ready for another showdown with the elusive Kaitou Kid. The master of camouflage has staked his claim on yet another prize: a star sapphire known as the Jewel of Destiny. Detective Mouri has been hired to protect it by its owner, a famous actress; but the job will prove to be far more difficult than imagined. That evening, Kaitou Kid arrives in full force disguised as Conan's adult self, Shinichi! Can Conan and friends protect the Jewel of Destiny from Kaitou Kid and also uncover the hidden schemes that are brewing?

Conan and the gang are taking a long needed vacation aboard a luxury liner – paid for by Sonoko! Their peace and tranquility is interrupted, however, by a string of murders onboard involving VIPs; and this time, it’s up to Mori to take the spotlight to solve the mystery. With the help of Conan, the case is closed; but as the suspects are caught, they decide to take the St. Aphrodite along with them. Now, Conan and the gang must escape the cruise ship before it sinks, but there may be more to the mystery than meets the eye...

Kaito Kid Strikes again, and this time, he is after a mysterious Russian egg in the possession of the Suzuki Corporation. With both the police force and Mori Kogoro protecting the egg, Kaito Kid was able to steal it with ease; but unexpectedly, a dangerous assassin name Scorpion blew Kaito Kid out of the skies by shooting at his right eye. What is so special about this egg, and why is Scorpion killing everyone revolving this case? Conan Edogawa must solve the mystery while hiding his true identity from Ran.

After enjoying a camping trip, Conan, Haibara and the rest of the Detective Boys take a trip to the newly-constructed Nishitamashi Twin Tower Buildings - considered by some to be the closest place to heaven. However, when a man is found dead, foul play is suspected; and Conan believes that the organization who poisoned him and turned his body into that of a child's is somehow involved. Meanwhile, Haibara has become suspicious, sneaking off to make phone calls in the night. Could these events be related?

When a tunnel bombing nearly claims the life of its target, the governor of Tokyo, Conan takes the case to find the culprit. His investigation leads him to the snowy mountain village of Kitanosawa, but when he arrives there, he finds that the sleepy town has plenty of secrets. After learning that the local nurse’s son was found unconscious at the foot of a hill on the same night as a hit-and-run eight years earlier, the young detective finds the coincidence all too suspicious - especially when another tragic event occurs soon after. Now Conan must to find out what really happened on the mountain that night many years ago, and what relevance it all has to the recent attempt on Governor Asakura’s life.