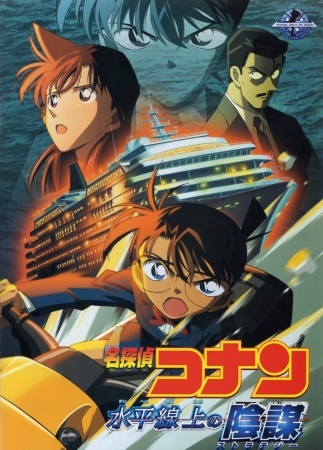 If Detective Conan and Titanic had a baby, it would be Strategy Above the Depths. A good amount of misdirection involved, but overall the plot beats are very predictable. This movie definitely ranks pretty low in my DC Movie list, but it was pretty fun at parts! The trick is not very clever in the main mystery, but the writers really focused more on the twist. I would definitely recommend the DC Movies to anyone, regardless of whether you've seen the anime, though I would not start with this one. Murder, mystery, and boat sinking fun!

For DC fans: the characters were very weak in this movie which was very disappointing. Mouri Kogoro is labeled as a pervert by Megure which just felt so lame to keep repeating that same joke just to enhance his deduction show at the end. Ran also being a damsel in distress (basically by choice in this movie) is just my least favorite side of her. "I can oooooonly be saved by Shinichi!!!!" Well yeah, girl! With that kind of attitude! The Detective Boys and Sonoko had some enjoyable gags, but the sincere moments, which are my favorite in the franchise, were not hitting the right way (though I did like the movie ending with a serious post-credit scene instead of the normal gag).