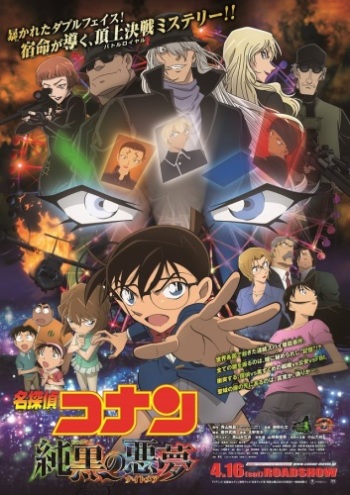 A thrilling blast from start to finish. Packed to the brim with gorgeous animated action sequences, intrigue, and more than a little heart, this is a standout Conan film. This installment sees a deviation from the show's typical mystery-centric plot in favor of a high octane spy thriller. With a lot of lives on the line and the convergence of a frankly impressive number of major recurring characters, the stakes are high, which makes for an exciting time. Newcomers to the series may struggle to keep track of who's who and might find some of the antics and impossible feats a bit silly, but, as a fan of the series, this was hands down one of my favorite films so far.

One of the most exciting movies Ive watched, great movie for the 20th year of Conan

I am one of the biggest fans of this anime and I'm never disaapointed by the quality of the movies.

This movie was more of a action then a mystery, however it was quite enjoyable

I like Curaçao, she was amazing and I just like how active she is, how she drove the car, jumped to save the idiot genta and how she saved the day along with the trio ( conan, akai, bourbon)

She was also able idnetify Hiabrara as Sherry and that was cool, I liked their shorty lived moment of her saving Ai and then finishing of and getting killed in the End, as expceted from a BO movie character. Ai seemed sad when she saw what happed to her as she aimed to save the kids, great moments.

I also like how international the BO is, it does give the BO more deapth as being sot after by many agincies, however the amount of spies withing the Bo who even left the Bo is quite worry some as how can many aginacies enter the Bo that easily, but I do see how the Bo was able to take care of it with going to three coutries and killing the spies, was a nice scene.

Over all, I like everything about the movie, loved watching it Raw, Korean Dub and Japanese with english subtitles.

After watching so many episode of Detective Conan, one can somewhat predict the outcome of the story. I wouldn't say that it's bad, but it wasn't the sharpest pencil in the drawer. The previous 2 movies has overshadowed it quite a bit. Quite disappointing, as this movie is related to Black Org, yet, lacks the thrill.

Chosen OST and SFX are really good, BUT, the ending song . . . well, it's matter of taste, and it's not my cup of tea.

This is actually one of the plus point in the movie. There's a great deal of self-searching and self-discovery, that not all Black Org members are really bad. There's also the Amuro-Conan-Akai team that managed to save the day. It was quite refreshing to know that Amuro is willing to set aside his hatred for greater good.

So overall, the movie was meh for Conan's standard, it could be better. Nevertheless, it was still quite enjoyable

I'm a little late to the party with this review, but I did finally manage to find more than the first 8 minutes of the movie.  Actually, I had completely forgotten about it up until recently since it takes so long from the time of release to someone being able to sub it.

The movie opens up with action and a chase scene, as some data has been stolen from some unknown location.  Considering that we see the Akai and Rei/Amuro chasing the criminal (merely referred to as "that woman" for the time being), it isn't hard to deduce where the data came from.

The chase ends in a monumental car crash, and though everyone appears to have survived it, the unknown criminal wound up missing.

About a day later, Conan and his friends are headed to the aquarium, where they come across a woman with two different eye colors who also has amnesia.

In the meantime, the Black Organization is making their move to get closer to the mysterious woman.

I'm going to gloss over this section instead of going into detail, since listing some characters will give it away.

I will, however, say that Akai and Amuro make an appearance, as well as certain members of the Black Organization.

The Detective Boys/Shounen Tantei actually play a large role in the story and have a huge influence on things (without knowing it), though Ran and Kogoro only make cameo appearances in the movie.

Now, I don't know if it was the version I was watching, or my speakers are on their way out, but the sound in the beginning with the Shounen Tantei sounded a little strange.  This movie also did the typical "fairly quiet when people are talking, but loud as heck during action scenes" move, so I bumped down the sound rating for that.

An issue I had with the animation, and it could have just been the quality I watched it in, was that during the climax and high action scenes when there was a lot of dust being kicked up, it was difficult to see what was happening on the screen.

After the last couple Conan movies, this one was a breath of fresh air.  It has a similar tension to movie 13 (The Raven Chaser), but multiplied.  The mystery woman in the story is probably one of the most complicated characters, and I couldn't help but become attached to her.

The ending, on the other hand, was probably one of the most bittersweet endings I've ever seen in a Detective Conan movie.  For the first time I can remember, after watching the movies since I managed to find the first couple which had been out at the time, I wasn't cheering at the end.  Rather, I was both relieved and saddened.

I won't say more than that because I worry about spoilers, but though there was (thankfully) a moment or two of Conan's insane bravery in the climax, the movie took an interesting turn after that which quickly had me retracting my cheering.

To be honest, this is probably one of the better Conan movies since they began to decline at around movie 14 or 15 (with perhaps one exception).  It had moments where I held my breath, moments where I cheered, and moments which had me on the edge of my seat.

Unlike some of the earlier movies, there was no real "mystery" element.  The audience could figure out what was going on pretty easily from the get-go, and all of the major players were introduced in the movie quite quickly.

The only mystery was related to the introduced woman, and honestly I don't think it was fully explained properly (I had to go and look it up to make sure I understood it correctly).

Putting that aside, there was still plenty of intrigue to hold my attention, and I'm sure the attention of many others.

If I have to nitpick, there are a couple moments near the end with Ran and Sonoko which I honestly think were completely unnecessary.  During that time, there was a race against the clock situation and the movie was just about in the midst of the climax...and then the animators decided "hey, let's put in the obligatory phone call from Ran to Shinichi, have Ran realize, as usual, that Shinichi is nearby, and have Sonoko goad her into trying to find him".

It completely ruined the atmosphere and the mood of the scenes, and by this time it's been so overdone that it was just groan-inducing.  Same song and dance with that; we get enough of that in the series itself, and then the movies started to have that as a common thing for some reason.

Again, I'm docking points from what otherwise would have been one of the best Conan movies I've seen since 14 and 15 because of that completely unnecessary scene...and the timing in which it was done.  If it was done earlier, then I would have been annoyed at it being in there since it didn't mesh at all with the plot (or make even one lick of difference in said plot or tension), but at least it wouldn't have interrupted the building climax.

We were beyond the rising action at that point and into the climax of the movie; that's not an appropriate time for the Ran/Shinichi phone call shenanigans.

Other than that, the movie was excellent, and I'd highly recommend it.