Detective Conan Movie 14: The Lost Ship in the Sky - Recommendations 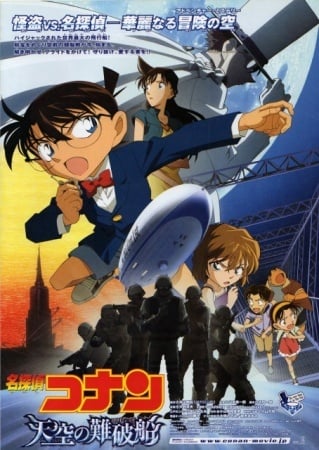 If you're looking for anime similar to Detective Conan Movie 14: The Lost Ship in the Sky, you might like these titles.

Kaitou Kid has a new target: a large diamond by the name of the Artemis Teardrop. It is currently located on Koyakejima Island, and Detective Nakamori is laying in wait ready to catch his nemesis. As fate would have it, the long-suffering policeman isn’t the only of Kid’s rivals present, as Conan and the gang are accompanying Sonoko to a party on the very same island. As the young detective inadvertently lets the thief slip through his fingers, it seems that Kid has made a perfect getaway. However, when the Detective Boys bring the teen down and then mistake him for Shinichi, his escape won’t be so easy after all, especially when the island itself has a few tricks up its sleeve…

As a much-needed break from his sleuthing duties, Conan is looking forward to reading some newly-borrowed manga in the evening; however, once more, duty calls! Kogorou Mouri has been asked by the wife and daughter of the Raizou family to protect a Treasure Sword that has been "claimed" by the Kaitou Kid; however, Mine Raizou and his mother are certain they can handle the problem themselves. Conan, the Detective Boys and the rest of the gang must defend against Kaitou Kid's raid with the help of the young swordsman Yaiba!

The Kaitou Kid - aka Kaito Kuroba - is currently on the prowl for his next heist: the Crystal Mother, Europe's largest Topaz! However, acquiring the jewel won't be easy as it has been hidden by its owner, the Queen of Ingram, aboard the Royal Express luxury train. What's worse is that not only Conan, but also the crown prince of Ingram stand in his way! Will Kaitou Kid pull off the crime of the century?

After receiving a strange (and unintentional) blackmail call, Conan elicits the help of Heiji Hattori to track down its intended recipient. However, once they find the victim they discover that the perpetrator has stolen his expensive and valuable jewel – a jewel that the mischievous Kaitou Kid desires for himself! Conan and Heiji must once more use their skills of deduction to unveil the identity of the villain and save the valuable prize.

The Disappearance of Conan Edogawa: The Worst Two Days in History

Detective Conan Magic File 2: Kudou Shinichi - The Case of the Mysterious Wall and the Black Lab

One day during middle school, while impressing the local kids at the park with his soccer skills, Shinichi meets a strange man asking people if they saw him at the park three days ago. His name is Kouichi Akimoto, and he is the prime suspect in his grandmother’s murder. At the time of the killing, Kouichi was asleep in the middle of the park following a drunken night with a friend, making it impossible for him to be the culprit, but there’s just one problem: there’s no one to confirm his story! Determined to help the man, Shinichi begins to investigate. But when his only lead – a woman walking a large black Labrador – hits a brick wall, it seems his inquiry is back to square one. Can the rookie Shinichi figure out the truth of the matter and get Kouichi his much needed alibi?

Following the events in Kitanosawa village, Conan is recuperating at home when he’s surprised by a visit from Heiji. Meanwhile, Ayumi, Mitsuhiko and Genta finally give a souvenir gift from the village to their teacher, only to discover that her present was mixed up with the one Sonoko bought for her boyfriend! Confused by the mix-up, the group meets up at the detective agency where Heiji - ever on the hunt for a new mystery - takes it upon himself to discover how the two packages were swapped in the first place...

Detective Conan OVA 3: Conan and Heiji and the Vanished Boy

Ran and Conan have been invited to visit Osaka by Heiji and Kazuha. Once there, they run across three children - Mayumi, Mikihiko, and Kenta - who have an uncanny resemblance to Ayumi, Mitsuhiko, and Genta. The trio is searching for their friend Satoshi who has gone missing, and they want Heiji's help to find him. Soon, our detectives discover that Satoshi's disappearance may have something to do with a bank robbery that happened earlier in the day. It's a race against the clock to save Satoshi before it's too late!

Conan and the Detective Boys have a new homework assignment: interview a local shop keep about their line of work and plans for the future, and then give a presentation to the class. Of course, the gang chooses none other than Detective Mouri; and after a series of off topic questions and answers, they decide to shadow Mouri and see what his job is all about. Of course, things don't go exactly according to plans - and now, Conan and friends must help Mouri solve a mystery involving a strange kidnapping!

After receiving an invite from an acquaintance, Conan, Ran, Kogorou and Agasa head to London. Meanwhile, back in Japan, Mitsuhiko discovers a magazine article about a child star named Grace Aihara, who bears a striking resemblance to Haibara! And when he and Genta receive a call warning them to keep Haibara away from the professor’s house at all costs, the boys begin to suspect that something is wrong. Will the two detective boys be able to successfully carry out their mission to keep their friend safe, even with shadowy figures following Haibara's every move?