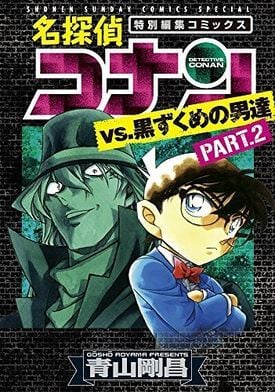 The compilation film combines footage from various television anime episodes that center on the Akai family.

Detective Conan: Approaching the Mystery of the Ancient Dinosaurs!

Tachibana Sakon is a skilled puppeteer with an unusual hobby: solving murders. Along with Ukon, a one-of-a-kind puppet made in the Meiji era, Sakon manages to find himself in a variety of life-threatening situations. Join the duo as they put their detective skills to the test in terrifying cases of revenge, malice, and murder.

Thirty years ago, Tokyo was destroyed in a massive earthquake known as The Great Fall. Today, the remains of the dead wasteland stand as the city of Kyuto, which is inhabited by few. In this city lives the head of the Hyuuga family, twelve-year-old Mayuki, who is able to understand the world around him with the help of extrasensory abilities. Along with Minori and the twins Kouta and Rakuta, Mayuki will solve the strange events taking place in the city; but who are the nefarious forces that are running the show?

Detective Conan: A Written Challenge from the Pyramids!