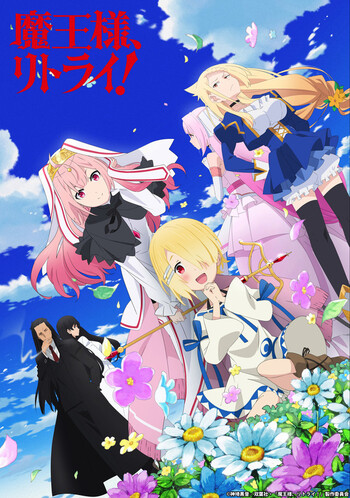 What can I say?

Dude's a freakin demon lord doing demon lord things, like planning to open a hot springs and make a bajillion dollars while collecting a harem along the way.

This show is very much like an (Australian) McDonalds cheeseburger. You know it's bad, but it tastes so god-damn good that you just don't care.

The animation is terrible, the music and sound design is lacking and it's about as generic as it gets, but I still had fun and will keep watching it.

I initially avoided this one due to perceiving it as just another generic harem. Boy, was I wrong. The relationship between Hakuto and Aku is wholesome. Like a father and daughter. And while there are quite of bit of bath scenes, the figures of the characters are unexpectedly not emphasized. Pretty much every instance of sexualization is done to comedic effect. This was actually my entire reason for writing this review. I wouldn't want anyone to miss this gem because of false impressions.

The story is nothing new. A guy gets pulled into a game that he's used to playing and due to his previous experience, his power is that of a tornado to a hair dryer. The animation was obviously produced on a budget. Most of the attacks are lame and seem to be thought up on the spot. The music is pretty good. The main theme is metal, which is always a plus for me, and there's even a tune that's reminiscent of the 8-bit/16-bit console era. The real appeal here is character design. With almost every character that's introduced, I start to think of how they're going to interact with other side characters. Unfortunately, 9 episodes in and I haven't seen much of that potential realized. Definitely gonna have a look at the manga.

I just got done watching all 12 EP. This show seems more like a parody of normal isekai shows.   It seems like a mix of overlord, slime, and a few others. If you take it seriously, then you most likely won't like it IMO. Like the show has an identity crisis, and this is what kills it.

Story: The story is very generic. It follows the overlord theme where some OP gets summon to a world, makes the world better to take it over, and they are aiming to get home. How it goes about it is iffy until about the tail end. In fact, the last episode caught my attention, but before then it was more of a miss than hit.

Characters: This is what makes it feel like a complete joke. None of them have any depth. They all can be summed up in 1 or 2 lines talking about them.

Another thing is all the underage or near underage women and and 1 adult women wants to sleep with the main character. Because of this, you will get 10 min or so of screen time of them wanting to touch him, them trying to, and some insulting him.

To be honest, if they made this into a full on parody, then this might be good. But at a given point these character flaws and lack of depth kills the show for me.

Sound and animation: The animation isn't the worst I seen, but it isn't far from it. I tend to overlook much of this since they might of not had the budget or whatever, but for the first number of shows it's very very very noticeable. The sound isn't good or bad.

With all this being said, I will watch another season IF it comes out and IF I'm not too busy. But, I'm not going to be asking for it.

Demon Lord, Retry is pretty mediocare, but is sufficietly entertaining.

The animation is some of the worst I have ever seen, but the art is pretty good.

The story leaves a lot to be desired, but hits all the necissary notes. It is a pretty shallow plot and doesn't really explain what is possible or how things work.

It isn't a show that I loved, but it was acceptable to fill time.