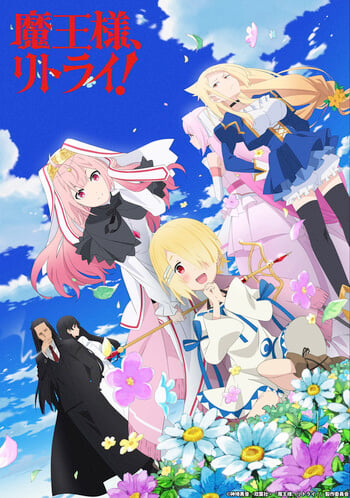 If you liked one, you will surely like another. Gamer that was playing as an demon lord, spawned into another world. Both are surely very alike.

both have a gamer as the mc who is sucked into the world and is overpowered. both have female companions.

so similar that you need absolutely watch both of them. (can I say so similar again:)

They are both steaming piles of garbage cashing in on the combination of overpowered protagonists in a strange world. Yet, there is something to be said for a show that gives you everything you want in fantasy land. Enjoy in moderation :)

Premise is similar in the sense that both MCs are summoned into another world as an OP demon lord with its own tag of harem. Both are relatively light-hearted.

both MC are summoned into a fantasy world that is apparently based on their belowed mmorpg. Both MC main quest is apparently to find a way to return home. So basically same story.

I like both, but it would be much better if they'll continue for a bit longer. OP players makes more sense and ideal protagonist than a weaker but cannot be beaten by stronger opponents and eventually manage to win.

They both are have all the best qualities for a comedic-isekai anime. Both involve the MC being "reincarnated" into a game that they exell at (one might say they are very similar to Sword Art Online), and both take on the personalities of said character.

You are going to enjoy both animes and also I have finished both of there light novels.

They are both similar anime, however demon lord, retry is a little more serious than how not to summon a demon lord

If you liked one, you will surely like another. Gamer that was playing as an demon lord, spawned into another world. Both are surely very alike.

Practically has the same plot as overlord. MC's favourite game is shutting down, he stays on up until its shutdown, then gets transported into the world as the demon lord. This anime is like the discount version of Overlord

By ep 4 Demon Lord, Retry! he starts to bring his servents to where he is at. Like Overlord, he even has them gather info vs killing everything.

Demon Lord, Retry! is basically a knockoff and cheaper version of Overlord

both stories start with the same premise: the MC favorite mmo shuts down at midnight and gets someone summoned to a fantasy world that is seemingly based on that mmo. Without going to much into spoiler, this is where stories probably divert as overlord leads the MC down the path of being an anti hero while demon lord retry still keeps the MC humanity and humility.

Very similar concept of gamer put in his game world where he is owerpowered leader. In both series main character fears there might be somene powerful and looks to protect himself.

Both are video-game based iseki with overpowered protagonists that find themselves in highly uncomfortable situations on the regular.

Depends what you are looking for, but both have Isekai into a game world as a powerful character. Underlings that are of dubious morality, and game mechanics applied to the world.

Demon Lord, Retry however is a much lighter and laid back tone. Drama and suspense are lot lower than Overlord which goes for a more gritty take.

Both transfured into thair Videogame characters bodies on the "shutdown" of the games servers, Both overpowed Af, both Pretty good anime (though the abilities function differently)

Both the anime is about magic and about demons. they both are similar and I strongly recommend this!

Both give the aspect of the "bad guy" being the main charactor,in a fantasy world. very similar. i can not see one being liked and not the other.

Both Overlord III and Demon Lord Retry! has a similar isekai-plot with strong OP MCs. In many ways Ains is very similar to Kunai, using their character as a shield to mask their true self. Though Overlord has a larger fanbase, I have no doubt that Demon Lord Retry! is on a path to be a very strong franchise.

Both series has overpowered hero isekaied into their gameworld. In both hero build harem of followers who are in awe of his power. And in both hero lack any true opposition.

Both are Isekai and feature a fairly overpowered protagonist, as well as plenty of humor and lewd jokes

Both are lighthearted with super powerful main characters. They have action and adventure as well. They also both share the "empire building" aspect. Reikenzan isn't Isekai like Demon Lord Retry, and has a stronger focus on the MC training to become better