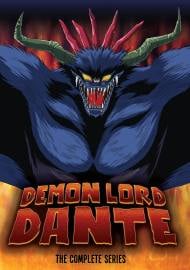 I watched the full series, like one would watch a train wreck and not be able to turn away. The animation looked like it was from the 1970‘s. I was shocked to learn that it was from 2002. The best way to describe the animation would be un-interesting, with little detail. The characters were meh. I found it hard to get interested in them. The story seems to start out typical. It is very violent with adult situations. Then it flips around completely. What you thought was a typical occult situation was anything but. Not to mention a very weird story. Anyone with strong Abrahamic religions convictions should not watch this, it will upset you. This anime had too many problems for me to enjoy, despite it’s very original story concept. I gave the story a few extra points for originality & balls, but the deliverance was too bad for me to over look.

Demon Lord DanteGeneon (Pioneer)Complete Collection - 13 episodes325 minutes - 4 discs$99.99 (2005)ISBN 013023254091English/Japanese Audio - English SubtitlesDirector - Kenichi MaejimaStudio - Dante Project - Dynamic PlanningSynopsis: A group of satanists are abducting women to perform sacrifices.  Ryo Utsugi is a normal high school student who suffers from horrific nightmares.  The cultists kidnap his sister, Saori, for their black mass to resurrect an ancient devil known as Demon Lord Dante.  Ryo's visions lead him to the ceremony where he attempts to free his sister.  Simultaneously a clandestine holy organization called "D" attack the satanists.  In the ensuing confusion Ryo manages to rescue Saori.Ryo's nightmares worsen and infiltrate his daily life until he seemingly commits suicide by jumping from a cliff.  Instead of falling to his death he is transported to the mountain cavern where Demon Lord Dante has been imprisoned by God for 2000 years.  Dante tricks Ryo into freeing him and then summarily gobbles him up.  The trick is on Dante when Ryo usurps his former human host, Judas Iscariot, and assumes control of the vile monster.  Now Ryo is in control of a 200-foot-tall beast of unimaginable power and a body made up of giant fangs, massive horns, bat-like wings, a gnashing tri-spiked tail, bird-like legs, and Ryo's face smack in the middle of its forehead.  Horrified, Ryo rages uncontrollably in the city with his merest gesture causing extreme death and destruction.  Ultimately he learns to control the power of Dante and returns to his normal form (able to transform back to Dante when necessary).  The satanists bid for control of Dante by convincing Ryo to join their cause, while the organization D hunts him with genetic weapons.  Demons and angels from his past come to haunt Dante/Ryo and Saori becomes an unwitting pawn against them.  In true Go Nagai fashion this show is an action-packed thrill ride and the true nature of Dante will shatter everything you know about God, Satan, devils and humanity!!Pros: Go Nagai, extras include press conference with Nagai (explaining he first drew Dante because he thought a big monster would fill up the comic panels and be easier to draw) and director Maejima (who is revealed to be a giant "Man-Baby"), unique story and ballsy concept by Nagai, the origin of Dante is hilariously absurd, the plight of humanity and influence of God is absurdly hilariousCons: Animation style is dated/low quality (although true to the original style of Nagai), absolutely not for children (which could also be a good thing), Nagai's original character designs are fairly hideous, Ryo has a creepy crush on his sister (a recurring theme in many anime)Conclusion: I can guarantee Go Nagai will burn in hell for creating Demon Lord Dante.  Taken at face value this show is incredibly bad, but it fits into that rare category of bad which ends up being really funny.  I grew up watching those low-budget, late-night horror anthology shows (like The Twilight Zone, Tales From the Darkside, and The Outer Limits) and developed a keen ability to find enjoyment in low-budget programming.  The plot twists here had me laughing for days, especially after trying to explain the story to my wife and some friends.  They just looked at me like I was crazy (well, crazier than usual).  Mostly awful and incredibly blasphemous, this show went somewhere I didn't expect.  WARNING: IF YOU ARE A RIGHT-WING CHRISTIAN THEN WATCHING THIS SHOW IS LIKE BEING SPLASHED IN THE FACE WITH ACID.  I AM SERIOUS.  DO NOT READ THE NEXT SECTION OR ATTEMPT TO SUE ME.  I DID NOT CREATE THIS ANIME!!!*SPOILER ALERT*I usually avoid spoilers in my reviews, but just in case you're not planning to watch Dante and still want to know WTF I'm talking about...then read on. Three-quarters through the show we discover all sorts of disturbing facts: God is a sentient ball of energy  travelling through space which descended to Earth in order to inhabit the bodies of others and experience their lives  The original humans lived in the cities of Sodom and Gomorrah.  They refused God's request at the behest of their leader Satan the Wise One God was infuriated with the original humans declaring war and attempting to slaughter them.  He then evolved the next highest form of life - monkeys 'natch - into human forms and placed a fraction of his essence into them to replace their souls.  So the current "humans" on Earth are not the originals and have no souls The original humans were then dubbed "demons" and God continued to wage war on them through his "humans" by twisting their perception through organized religion During the original battle with God, Dante is flying a jet armed with a powerful weapon when he is hit by a stray energy bolt from God.  Careening into a nearby tyrannosaurus rex the bolt combines all the different parts into one massive creature -- Demon Lord Dante!!  Yes, that means Dante is a jet/weapon/T-Rex/humanoid demon hybrid which should make perfect sense to anyone reading this (right?) Demons are good (like Satan and Zeil Zebub aka Beezlebub), God is evil, and humans are really soulless monkeys (surprise!) Fortunately Ryo's sister is not actually related to him by blood (so his creepy crush is kinda less creepy).  I guess there's a happy ending for these two, but all of humanity buys it in the end The individual discs (vol. 1-4) are relatively cheap these days compared to the uber-expensive box set (the original $99.99 MSRP was outrageous). 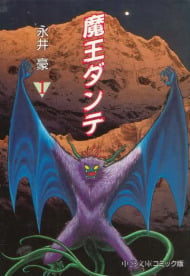 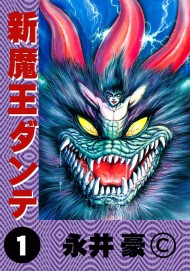