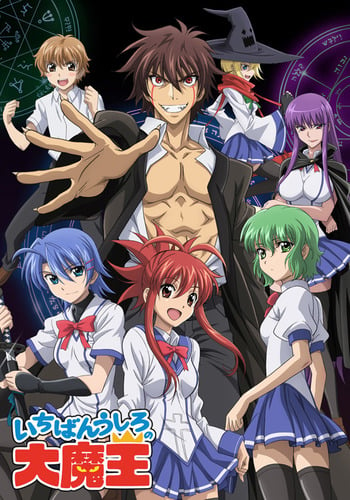 Your future occupation is: Demon Lord

The Upperclassman Who's A Bit Scary

Let's Go to School by the Sea!

Do You Have a Crush?

Each of these series are slightly ecchi, magic based comedy/action titles. In each show, the lead male finds out that they are actually some sort of legendary super powerful person that fights to save/change the world.

Each series features a man or well actually a boy who discover that they are some powerful person of legend in a magical world and as a result of this various types of girls end up falling for them.  Both series offer tend to follow more of a ecchi and comedy route with some fairly good action added in here and there.

Both are set in a magical academies and revolve around magic. There is a male protagonist that is given an awesome power, and have something to do with saving/changing the world. Also, both are based on ecchi elements combined with comedy.

Both of these are fantasy shows with an interesting premise and powerful protagonists. Whether it's being the Demon Lord or the Campione, both leads manage to find themselves in interesting situations revolving around their bountiful female casts. If you like one, you're bound to like the other.

Both are about a guy who didnt nessecarily choose to be powerful but had this power thrust upon... neither of the main characters likes to be called by their respective title "Demon King" or "King/Campione". and also they're both harems... oh and they both fight magical beings... Id say if you like Ichiban Ushiro no Daimaou you'd like Campione! and if you liked Campione! you might like the other...

Both have a similar kind of storyline with a harem also both MC's wield great power, Ichiban Ushiro no Daimaou has more Ecchi/fanservice scenes but both of them or very good nonetheless.

Pride, Envy, Wrath, Sloth, Greed, Gluttony, Lust. These are the seven sins laid upon seven girls who rule over Biblia Academy. To retake his world, the boy decides he must control these sins... The boy, Arata Kasuga, has had the world he knows by a mysterious "Collapse Phenomenon", and his cousin Hijiri disappears into another dimension. To...

you can expect similar situations and comedic value's from one another, i imagine simmilar levels of echhi as well but the comedy and story/plot with a bits of actions make both series great

very similar animes. both main characters are perverted demon kings/lords. if you liked demon king daimao then you will like trinity seven for sure. have fun watching

Both has a demon king who gets alot of girls