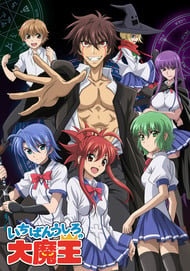 Man, I really wanted to like this; I tried. -And the reason I have a problem with this so much is that it’s the favorite of a lot of people? –Who are these people???  This is a Magic School anime… that’s kind of a Harem…? This guy enrolls in a magic school and finds out that he’s destined to be the Demon King... as prophesied by a fortune-telling bird in the school counselor’s office? When the school finds out what his future job is going to be, rather than fact-checking a talking bird, everyone discriminates against him – man, these people take racism to the extreme!   The Characters are under developed and inconsistent, and none were really likeable. The premise is interesting enough and the animation is pretty okay, but the story is all over the place, littered with plot holes, and the ending left many questions unanswered and was just, straight up, bad. The world building was so convoluted. It was hard to keep track of what was going on from episode to episode. I powered through it because I was hoping I would be pleasantly surprised (which is really easy to do with me).  Sadly, it turns out that I sat through it so you don't have to.  I think if I weren't stuck in a tent in Afghanistan, I would not have made it to the end. Watch High School DxD seasons 1-4, instead -it is the anime this one wishes it were.

Hoo boy... this show... when people said it started well, and went downhill at the end, they weren't kidding. I watched Ichiban Ushiro no Daimaou at the recommendation of a friend on Steam; he told me that I should watch it, since I seem to enjoy harem anime. He did warn me about the drop in quality, but I never expected it to end like that. Perhaps it would have been better for me to give this a miss altogether... Story The initial premise isn't actually that bad - local nice guy Akuto Sai has just transferred into Constant Magick Academy in order to become someone who can help towards making the world a better place. However, the academy has a spirit called Yata-Garasu predict their future professions. Unfortunately for Akuto, Yata-Garasu predicts his future job not as a priest - which he said would have been the closest he could get to what he wanted - but as a maou, or demon lord - a being who will bring mass destruction upon the world. Now, as I said, this setup is actually pretty interesting, but its pacing more or less destroyed this anime. The last episodes in particular tried to cram FAR too many things into such a short space of time, and it left far too many things unexplained - episode ten especially so. Animation There really is not a lot for me to say about animation this time around. That or I can't put it into words. The animation was amazingly average for me. The action scenes were nice to look at, but outside of that, there was nothing that really stood out for me. The character designs were also nothing really special, with maybe the exception of the different hair colours for each of the heroines. Not one of them shared a colour, which was a little odd at first, but otherwise not important. Sound The background music in Daimaou is one thing I never really noticed. There were some times when it seemed out-of-place, but otherwise there was nothing really noteworthy about it. The opening song somewhat fits with the anime's style; the ending, however - being a sweet J-pop song that emphasised the harem aspect of the show - , grew increasingly dissonant to the episode's mood after each one. The voice actors fit the characters rather well in this anime. Takashi Kondo and Shizuka Itou in particular seemed to fit their characters like a glove with Akuto Sai and Fujiko Etou, respectively. Characters When all else fails, you need to at least have characters to make the show entertaining. However, this may be due to my bad mood when watching the latter half of Daimaou, but I couldn't even really enjoy the characters that much. While Akuto is a good character, what with wanting to help people yet is always seen as the bad guy even if he isn't involved in something, the real star of the show was most definitely Korone. This single character brought so many laughs to the show, going so far as to adopt a "little-sister" voice from time to time, which brought even more laughs. Sadly, the other characters leave something to be desired. Junko is a textbook tsundere, while Keena is the energetic airhead and Fujiko is the beloved sempai with a darker side. It certainly doesn't help that Lily Shiraishi, despite being shown in the ending theme, isn't even seen a lot of the time. Which is a shame really, because she was one of the other characters I liked. Final thoughts I shouldn't have expected much from Daimaou, but with such an interesting start, it was inevitable. Overall, unless you just want some mindless fun with some fanservice on the side, I would avoid Ichiban Ushiro no Daimaou like the bloody plague. Its story - particularly at the back end of the show - is an inconsistent mess, and the characters aren't particularly enjoyable to watch either. The only thing that really saves this show is the android observer, Korone, and MAYBE the show's opening theme. Truthfully, this anime needed at least 24 episodes. I wouldn't watch a sequel, but if a reboot were to come about with more episodes to fix the atrocious pacing this anime had, I would gladly watch it. Story - 2.9 Animation - 6.1 Sound - 6.8 Characters - 5.4 Enjoyment - 3.0 FINAL SCORE - 4.84 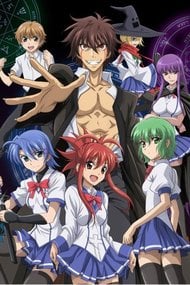 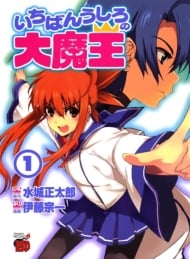 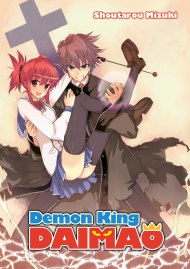