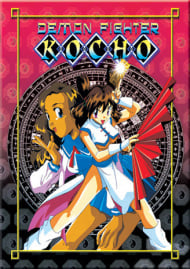 StoryDemon Fighter Kocho is a 30 minute 1 episode OVA that feels a lot like Haunted Junction, but is a lot more ecchi and a lot less funny. Our story begins (and ends) at Heian University, where a rash of ghost hauntings have been reported. The school happens to have an Astrology club that investigates such matters, made up of Kocho (who can't seem to keep her clothes on for various reasons), her little sister Koran (who sleeps around), and the perpetually horny Kosaku and club president. Due to its length, there really isn't a great deal of plot. Various bad spirits cause problems, and through their actions (or those of the president), the girls always seem to end up naked. Seriously, the entire point of this OVA was to provide a bunch of fanservice, and I found it to be quite annoying. In addition, there wasn't a lot of humor except for a few genuine parts, with the rest being fairly humorless, attempted or not. I guess if you really like fanservice, you might find that element of Demon Fighter Kocho amusing, but I found the extent of it to be very excessive and pointless. The fanservice pretty much followed the same pattern: Kocho loses her clothes, the guys get a nosebleed. Repeat. Repeat. Not to mention even the ghosts end up being nude occasionally, with giant nipples that scared me. I can't think of much that was redeeming about this story. I like ghost hunting type shows, but this seemed like a poor excuse for an "unusual" fanservice instead. The humor was for the most part not funny, the characters were incredibly shallow and uninteresting, and in general, it sucked. Really, there's much better series out there if you liked this kind of plot, like Haunted Junction.AnimationThe animation of Demon Fighter Kocho definitely isn't brand new or flashy, but it works fine for what it is. Granted, I wasn't terribly excited about the use of very bright clashy colors fo their outfits, and I'll admit the character designs look a bit pointy and crude. Regardless, though definitely looking like it was made in older days, the animation style wasn't necessarily bad, just slightly dated. I don't remember any CG or special effects, though they would have seemed out of place anyways. The only thing I remember that I specifically thought was a bit odd was the occasional movements of the characters as they jump through the air to throw something at an enemy, etc. In particular, it seemed a bit jerky and rough as far as the actual animation. And of course, the entire point of the series was the part that was the most prevalent in the animation: the fanservice. Nakedness abounded the entire extent of the episode, sometimes for what I consider to be no reason at all. Come on guys... I know it's a demon who can shapeshift and become any form it wants, but does that mean it has to turn into a woman, wear a trenchcoat, and expose its naked body (including giant freakish nipples)? The clothing was ridiculously designed to show off the most skin when wind blew or something else convenient happened, as well. Too much fanservice, period, and this was shown very clearly in the animation.SoundThe music was synthy and completely forgettable. Average, stayed in the background, but didn't have a vibrant life of its own. As far as voice actors, they all seemed fine in my opinion. CharactersThe characters were incredibly shallow and meaningless, given the fact that the entire point was to show off breasts and panties. The only character that really stood out was Koran, because she was notoriously a slut, and ended up sleeping with one of the demon ghosts, which yielded easily one of the funniest scenes in the OVA! The other characters didn't even have stereotypes to live up to, except the two horny guys, but hey, that's normal, isn't it? ;) No character development to be found, and in general, uninspiring characters who appear to be as shallow (personality-wise) as a mud puddle. OverallDemon Fighter Kocho was a big disappointment, period. I liked Haunted Junction and Yougen Kaisha, and I was expecting this to be at least decent, if not great. Unfortunately, the plot was very secondary to the excessive fanservice, killing any chance at character designs or humor in general. The animation and music was decent, that's for sure, but in general, this is probably 30 minutes you could save for something else more meaningful.

Anime in 200 Words: Demon Fighter Kocho Premise: A college student who struggles to keep her clothes on is called upon to fight supernatural terrors. She has titty-boobies. Characters: A young man who probably needs a blood transfusion by the end of the OVA, two beautiful sisters fighting for his attention, and a professor who makes perversion into an art form. Audience: Pervy men or members of ISSUP? If you’re prone to explosive nosebleeds, this one’s for you. Noteworthy Moments: Demon Fighter Kocho boasts the most awkward transformation sequence ever. Combine the spinning and strange close-ups from Sailor Moon, the exploding clothes in Master of Martial Hearts, and an overweight old man… and you get something that isn’t going to be erased from my mind any time soon. Female Stereotypes: Kocho seems like a nice girl who’s been waiting for the right guy to teach her about sexuality. Koran is more than happy to strip and sleep with anyone (including the enemy). Overall: The only moment in the OVA that stands out to me is one that can easily be found online without watching the whole thing. I’m not really an ecchi fan, so I don’t enjoy this much fanservice. :-/ 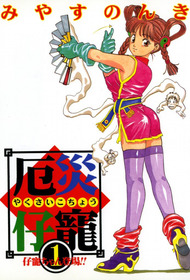