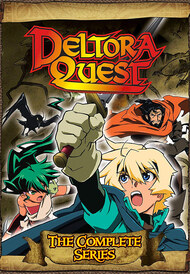 Ah the anime that got me into anime as a whole  This will be my second review (kind of)  Deltora quest!  As well as watching the show on cartoon network as a kid, I would often try and find the novels at my local school library (don't think I ever read them in order) Now the story  the tale of warrior Lief, who at 16 is presented by his father with a magic object known as the Belt of Deltora. When the Shadow Lord, an evil sorcerer, destroys the belt, thereby taking over the kingdom of Deltora, Lief faces the greatest challenge of his life. With assistance from his mentor, Barda, and young orphan Jasmine, Lief -- armed with only a sword and a magic cloak -- ventures into dark and dangerous places to find the seven magic gems stolen from the belt. Once back in their rightful place, the gems will empower the heir to the throne of Deltora and free the people from the tyrannical Shadow Lord. A simple fantasy tale for the most part but with characters so likable and pretty iconic i would Imagine at least in terms of early 2000s kid books (I'm probably wrong on that) The show would focus a couple of episodes on each arc or in this case each gem for the belt, of course not going into spoilers but it goes down hill pretty fast and watching it for the first time really was something. Fun fact, there is a second season but it doesn't have dub due to the actors wanting to follow the books themselves, personally I can't blame them but from what I've heard the ending is very well handled, I do plan to check it out someday down the line  All in all a good watch , perhaps a bit cliche at times but it still offers an adventure I would consider a classic!  And that's me once again outta here!

Deltora Quest... an anime made off the Deltora quest books that i read during my childhood!!!!! although many people say this is a bad/not good anime, i still wanted to watch it reguardless, but i was kind of swayed by all the negativity about it, - (which i hate to admit) so when it was actually aired on TV i just thought i'd watch it later on computer.....but then i still saw many small scenes from it on tv, i was basically hooked when i saw the similarity to the books, the episode i saw was with the riddler guy guarding the bridge, and the thing about combining truth and lie, then i was into it!!!                                                                                                                           so then i just watched it on TV, even though it was about halfway over, but then after 4 episodes, instead of crappily just watching the rest of it and the ending, i decided to watch it on sundays - where its going from the start, and its up to the ruby episode! and now as im writing this review, watched many random episodes, but in order only the first 2 episodes, then the 3 episodes leading up to the ruby, and about 6 other random episodes..... anyway to actually start the review... Story - I seriously do not know why so many people dislike this anime, although not an original story, i thought its still pretty good, and really interesting at times, and i love the simalarity with the books, but i hate how the next episode previews have spoilers!!!! (even though i know whats going to happen because of the books)                                          and then theres the compliant of how  "its been turned into a kids anime" - well the books were aimed at kids/early teenagers, so it makes sense to have it as a kids anime, even though the original deltora quest fans (like me) have grown up into 17,18, or 19 year olds, so iguess theres a kind of valid argument there.... and also i was mega trolled once when i thought there was going to be ecchi in it!!! lol in one episode, lief, barda and jasmine are being held prisoner in this pit/cave place with all these violent guys around throwing bottles, then jasmine stands up and sooo suggestively says "if i show you something you like, will you let us go?" but then instead of flashing them her boobs, like me and all the other deltora quest fans thought she would!!!, she instead got barda to do this weird dance lol - call me a pervert but it sounded suggestive!!! :)  Animation - I thought the animation was pretty good, obviously no serious violence, blood or gore in the fight scenes since its a kids anime, but that didn't affect it, and also good for me since i don't like gore! (even though ive watched elfen lied lol) although i will admit using CG for the guardians only looks kinda weird/out of place, but i guess thats the point - to make them stand out against all the rest of the animation...still looks cool though Sound (basing this of the english dub which is the only version i watched) - sound is ok..... although i initally didnt really like it, it grew on me and now i get so excited listening to the intro! Charachters - yeah im not really that good at charachter reviews...but basically Lief is the young man with the huge journey/task put onto him of getting the gems for the belt of deltora, Barda is "the big man" (quoted from the books lol) who's secretly been protecting lief his entire life, and goes out on the journey with him, and Jasmine is the "wild girl" who saves lief and barda in the forests of silence, and then joins them along with her pets philly and kree. so overall I'd give it 8/10, its a pretty good anime, and in my opinion doesnt desereve anywhere near the endless critism its recived, if only i watched it from the start before!!!  that being said, if there was an anime made off the dragonkeeper trilogy, the first 2 books being released about the same time at the deltora quest books and with similar popularity i would definately without a doubt watch it and not care what anyone said!!!!! Dragonkeeper trilogy = me and my friends all time favourtie books!!!!!

Deltora Quest is normally considered a poor anime that is just a typical adventure series about travelling around a world that is now ruled by a great evil. To save the world, Lief, Barda and Jasmine must collect gems for the mystical Belt of Deltora. This sounds cliche, and most of the anime is cliche. However, I found this anime to be more enjoyable than most people think. It's best to watch with other people, like your family and a group of friends. I watched this with my sister, and for probably the first 15 episodes all we did was make fun of pretty much everything that happened. However, after a while, we began to become seriously excited about watching the next episode, and more interested in the story as they got closer to collecting all of the gems. We left off when they collected all of the gems, as the channel that played Deltora Quest for us stopped showing new episodes, which was very disappointing. Despite having made fun of the series at the beginning, we came close to it. If you give this series a chance, then you might find that you'll come to enjoy it too. 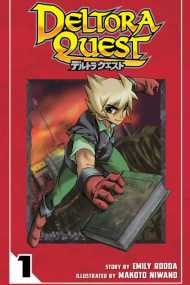